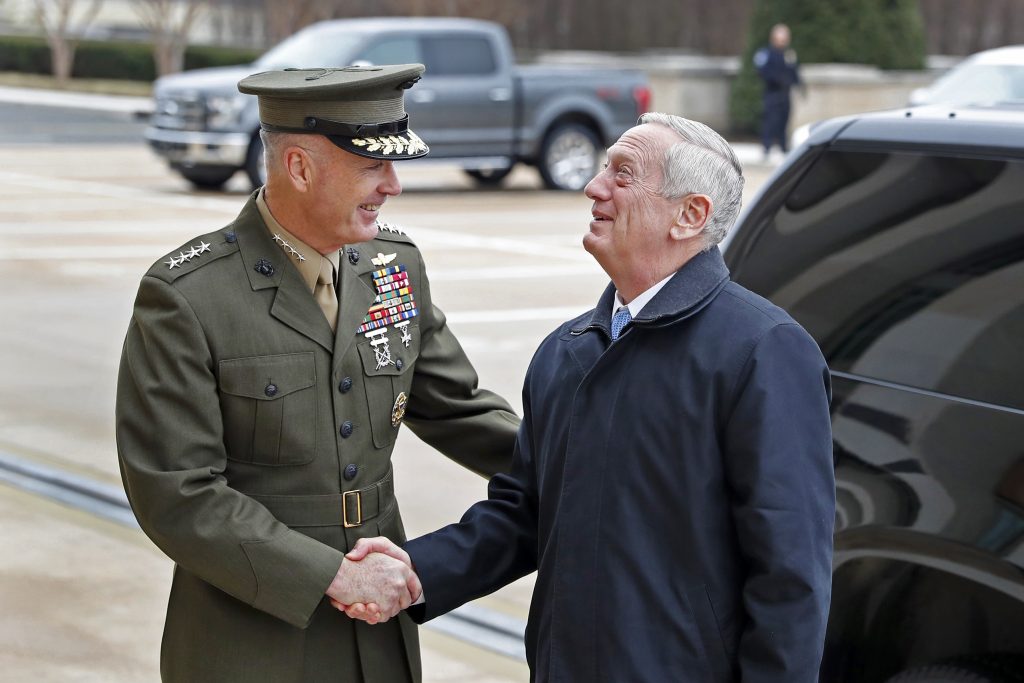 A new military strategy to meet President Donald Trump’s demand to “obliterate” the Islamic State terror group is likely to deepen U.S. military involvement in Syria, possibly with more ground troops, even as the current U.S. approach in Iraq appears to be working and will require fewer changes.

Details are sketchy. But recommendations due at the White House on Monday are likely to increase emphasis on nonmilitary elements of the campaign already under way, such as efforts to squeeze IS finances, limit the group’s recruiting and counter IS propaganda that is credited with inspiring recent violence in the U.S. and Europe. One official with knowledge of the recommendations said the report would present a broad overview of options as a starting point for a more detailed internal discussion. The official wasn’t authorized to speak to reporters about the contents of the document and demanded anonymity

Marine Corps Gen. Joseph Dunford, chairman of the Joint Chiefs of Staff, said Thursday that the emerging strategy will take aim not just at the Islamic State terrorists but at al-Qaida and other terrorist organizations in the Middle East and beyond, whose goal is to attack the United States. He emphasized that it would not rest mainly on military might.

Dunford’s comment suggests that Pentagon leaders have a more nuanced view of the IS problem than is reflected in President Trump’s promise to “obliterate” the group, as he put it on Friday. Dunford said the U.S. should be careful that in solving the IS problem it does not create others, hinting at the sensitive question of how to deal with Turkey, which is a NATO ally with much at stake in neighboring Syria, and Russia, whose military action in Syria has had the effect of propping up the Syrian regime.

Defense Secretary Jim Mattis is giving the White House the ingredients of a strategy, which officials say will be fleshed out once President Trump has considered the options. Officials described the Mattis report as a “framework” built on broad concepts and based on advice from the State Department, the CIA and other agencies. Officials have indicated the recommended approaches will echo central elements of the Obama administration’s strategy, which was based on the idea that the U.S. military should support local forces rather than do the fighting for them. Mattis already has signaled publicly that he sees no value in having U.S. combat forces take over the ground war.

“I would just tell you that by, with and through our allies is the way this coalition is going against Daesh,” Mattis said last week in Baghdad, using an Arabic term for the Islamic State group. “We’re going to continue to go after them until we destroy them and any kind of belief in the inevitability of their message.”

President Trump signed an executive order on Jan. 28 giving Mattis 30 days to present a “preliminary draft” of a plan. He said it should include a comprehensive strategy that would not only deliver a battlefield victory but also “isolate and delegitimize” the group and its radical ideology.

Asked if adding more U.S. troops or arming the Syrian Kurds was under discussion, Mattis said he will “accommodate any request” from his field commanders.

“We owe some degree of confidentiality on exactly how we’re going to do that and the sequencing of that fight so that we don’t expose to the enemy what it is we have in mind in terms of the timing of the operations,” Mattis told reporters. But he said those are “some of the issues that we’ll be dealing with as we go forward, and we’ll be addressing each one of them, from intelligence, to tactics, to logistics as we sustain the fight going into this.”

Army Gen. Joseph Votel, the commander of U.S. Central Command, which oversees military operations in the Mideast, has said more American troops may be needed to speed up the fight in Syria. The U.S. currently has about 500 special operations forces in Syria helping to organize, advise and assist local forces.

One of the thorniest problems the Trump administration will consider is whether to change the U.S. approach to Russia’s military role in Syria. Although President Trump has suggested an interest in working with Russia against IS, the Pentagon has been reluctant to go beyond military-to-military contacts aimed at avoiding accidents in the airspace over Syria.

Senior military leaders, including Mattis, seem more confident in the Iraqi military campaign, lending weight to the idea that the options will put a greater emphasis on Syria.

Officials say providing more heavy equipment and arms to the U.S.-backed Syrian Kurds is a likely — but politically sensitive — option.

NATO ally Turkey considers the Kurdish fighters, known as the YPG, a terrorist organization. But the YPG forms the main force to retake Raqqa, the Islamic State terrorists’ self-proclaimed capital and base of operations. Some in the Pentagon have suggested giving the Kurds heavy weapons, including rocket-propelled grenades, machine guns and heavy combat vehicles, but the Obama administration rejected the idea.

Other options include sending more Apache helicopters into the fight, and sending in more U.S. troops to help train Syrian forces.

The options on Iraq may well include decisions on the future U.S. commitment to the country. Both Mattis and Lt. Gen. Stephen Townsend, the top U.S. commander in Iraq, said that they believe the U.S. will have an enduring partnership with Iraq.

“I imagine we’ll be in this fight for a while, and we’ll stand by each other,” Mattis said in Baghdad.

Townsend declined to say how long the U.S. will stay in Iraq. But, he said, “I don’t anticipate that we’ll be asked to leave by the government of Iraq immediately after Mosul,” he said, referring to the city that U.S.-backed Iraqi forces are in the midst of retaking.