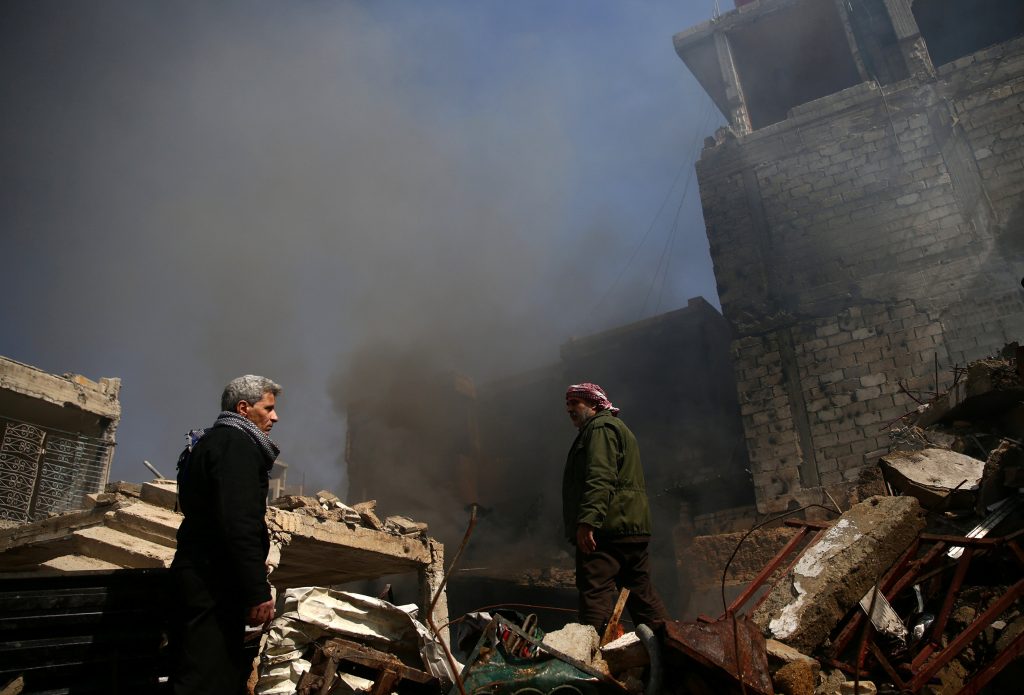 Syrian activists called on Sunday for the Assad government to engage in serious talks on political transition and for the United Nations to strengthen the fragile ceasefire as violence engulfed parts of the country.

U.N. mediator Staffan de Mistura said a terror attack in Homs on Saturday was a deliberate attempt to wreck the Geneva peace talks, while the warring sides traded blame and appeared no closer to actual negotiations.

“Our hopes are not high given the incidents on the ground and the continuous violations by the regime forces and its backers of the ceasefire,” Mutasem Alysoufi of ‘The Day after Syria’ campaign that supports democratic transition, told Reuters in Geneva.

Warplanes bombed rebel-held areas around several Syrian cities on Sunday including in the al-Waer district of Homs, and in towns around Damascus, the Syrian Observatory for Human Rights, a Britain-based war monitor said.

One person was killed in the Damascus suburb of Douma and three in al-Waer, the Observatory said, while shells and rockets were launched at terror districts in Deraa and Idlib provinces. Rebels fired several shells at a suburb of government-held Aleppo.

Under Security Council resolution 2254, de Mistura is meant to develop a plan to monitor the ceasefire and sanction those who violate it, Alysoufi said. “So this is a duty of the U.N.”

On the government delegation led by Syrian Ambassador Bashar Ja’afari, Alysoufi said: “We believe that they are not serious to engage here in serious political discussion, rather they are gaining more time and continuing their military strategy on the ground.”

De Mistura handed a working paper on procedural issues to delegations on Friday but there appears little prospect of moving to the key political issues that he had hoped to begin addressing.

He is set to hold talks on Sunday with two opposition groups that curry favor with Russia, President Bashar al-Assad’s main backer.

The U.N. envoy indicated to the High Negotiations Committee, which is leading the opposition delegation, that he would like to unify the disparate groups to facilitate face-to-face talks with the government to end the nearly six-year-old conflict.

A diplomat and opposition member told Reuters the working paper included an agenda based on resolution 2254 with focus on a new constitution and U.N.-supervised elections that would be discussed in three working groups.

Nothing would be agreed until everything is agreed, an opposition official said, citing the document.

His paper reiterated that issues related to the ceasefire and fighting terrorism are to be the focus of separate talks in the Kazakh capital of Astana, which are sponsored by Russia and Turkey with the support of another Assad backer, Iran.

Dr. Mazen Kewara, director of the Turkey operation of the Syrian American Medical Society (SAMS), said it was important to have a U.N. ceasefire monitoring mechanism and safe, unhindered access for aid workers to reach Syrian civilians.

“We prefer a ceasefire, a complete ceasefire in all Syria.

“But if it’s not possible we would like to see safe areas where we can provide our services freely with complete protection for civilians and our healthcare workers,” he said.