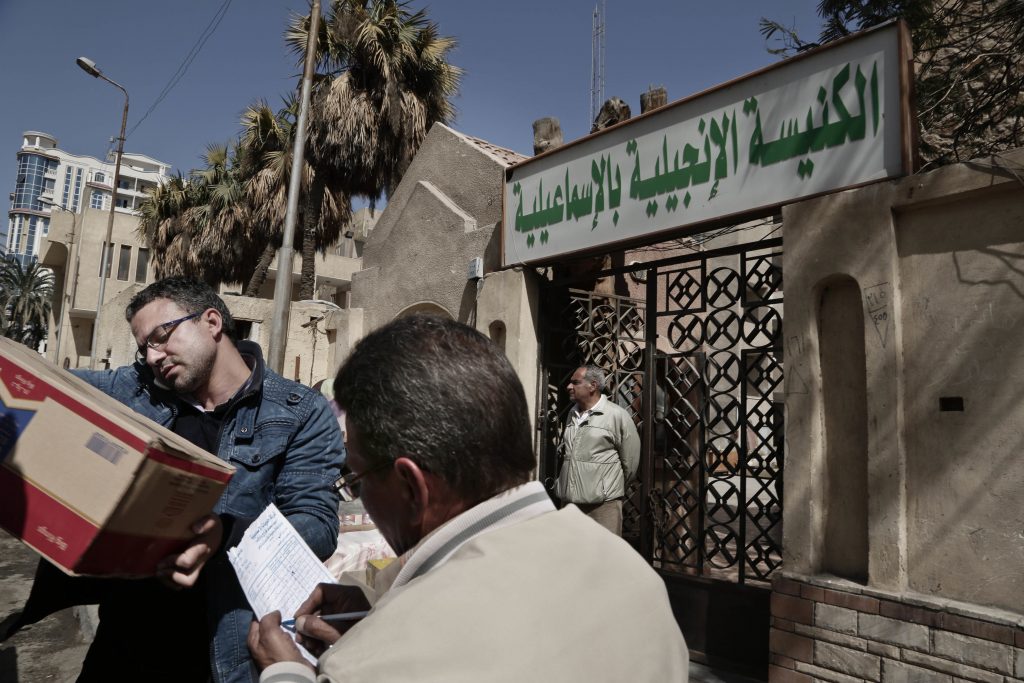 Egyptian Christians fearing attacks by Islamic State terrorists fled the volatile northern part of the Sinai Peninsula for a fourth day on Sunday, after a string of sectarian killings there sent hundreds packing and raised accusations the government is failing to protect the minority.

Over 100 families from the town of el-Arish and nearby have come to the Suez Canal city of Ismailia, 75 miles east of Cairo, since Friday, Nabil Shukrallah of the city’s Evangelical Church said.

Families arrive scared and in need of supplies, which are being stockpiled at the church via donations from several parishes, he said. They are then transported to be housed in and around the city, in private homes and also accommodation provided by the government.

“They’re exhausted, with urgent needs for food and children’s clothing,” he said, as one father carried off a sick infant to be evacuated by ambulance. “They’re terrified of the violence and brutality of the terrorists.”

Northern Sinai has for years been the epicenter of an insurgency by Islamic terrorists, and the area’s few Christians have slowly been trickling out. But departures rose in earnest after a Christian plumber was gunned down at home in front of his family on Thursday in el-Arish. It was the seventh such killing in recent weeks and stoked panic among Christians.

No group has claimed responsibility for the attack. But Egypt’s Islamic State affiliate, which is based in north Sinai and which in December carried out a devastating suicide bombing against a Cairo church, vowed in a video earlier this week to step up attacks against Egypt’s embattled Coptic Christian minority. It described them as “infidels” empowering the West against Muslims.

The Cairo church bombing and the recent killings point to a shift in Islamic State’s tactics in Egypt, with the group now also attacking Christian targets that are less protected than military installations, in an attempt to isolate them and embarrass the government.

At the Ismailia’s main youth hostel, authorities were putting up 45 families, luggage, boxes of food, and new displaced people arrived throughout the day.

“I don’t want to stay there and die as a casualty in the war that has hit el-Arish,” said Reda, a civil servant who arrived two days earlier with six family members including grandchildren. “If they allow us, we will stay here until the terrorism is over and the government makes peace.”

Before Egypt’s 2011 Arab Spring uprising, some 5,000 Christians lived in northern Sinai, but the number has since dwindled to fewer than 1,000, priests and residents say. Egypt does not keep official statistics on the number of Christians in cities or across the country.

Many rights activists say the displacement is a clear sign the government has failed to provide a minimum of security for the embattled minority in the volatile region, where they have faced public threats before.

The government only agreed to put up the fleeing Christians in government housing in Ismailia after pressure on social media, which they underline as another disturbing sign.

At the Evangelical church, shop owner Fayez, who also gave his first name only for security concerns, arrived with a truckload of furniture ahead of his family to seek a place to relocate.

“Hopefully we’ll find a home and be able to stay here, but I don’t know how I would move my business,” he said. “Daily life looks normal in el-Arish, until you hear about terrorists shooting people in their own homes.”