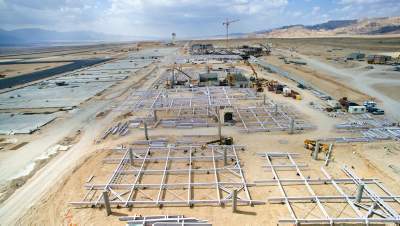 Eilat could turn into a major transportation hub, with the opening of its new airport. Transportation Minister Yisrael Katz has ordered the Airports Authority to develop deals with some 70 airlines to fly into the new Ilan and Assaf Ramon Airport, which is set to open in April.

With international-level runways and a large passenger terminal, along with facilities for cargo, luggage, catering, etc., the Ramon Airport will be in a position to take in flights from all international carriers that fly to and from Israel, and Katz hopes to bring new carriers as well. The new airport will replace the Eilat airport and the Ovda airfield, where several international carriers, including Wizz Air and Easyjet already fly.

Among the new airlines to fly into Eilat that do not currently service Israel will be RyanAir, which has filed a request to fly to the new airport. Besides travelers to and from Eilat, airlines see an opportunity to increase their passenger load from the rest of Israel, as Israelis seeking discounted flights to Europe will likely take the short haul flight from Ben Gurion Airport via Israir or Arkia and transfer to their international flights to Europe, Katz said.

One reason why Katz is confident he will achieve his goal is that landing fees at the new airport will be suspended for three years. “This is an important incentive for the airlines,” he said. “Eilat is a destination and this is the main reason we developed the airport, but airlines see this as an opportunity to increase their flights to Israel. We will continue to develop airports in Israel and we want to ensure that the low-cost revolution reaches every household in Israel.”