Politics Trump to CPAC: ‘Now You Finally Have a President’
Politics 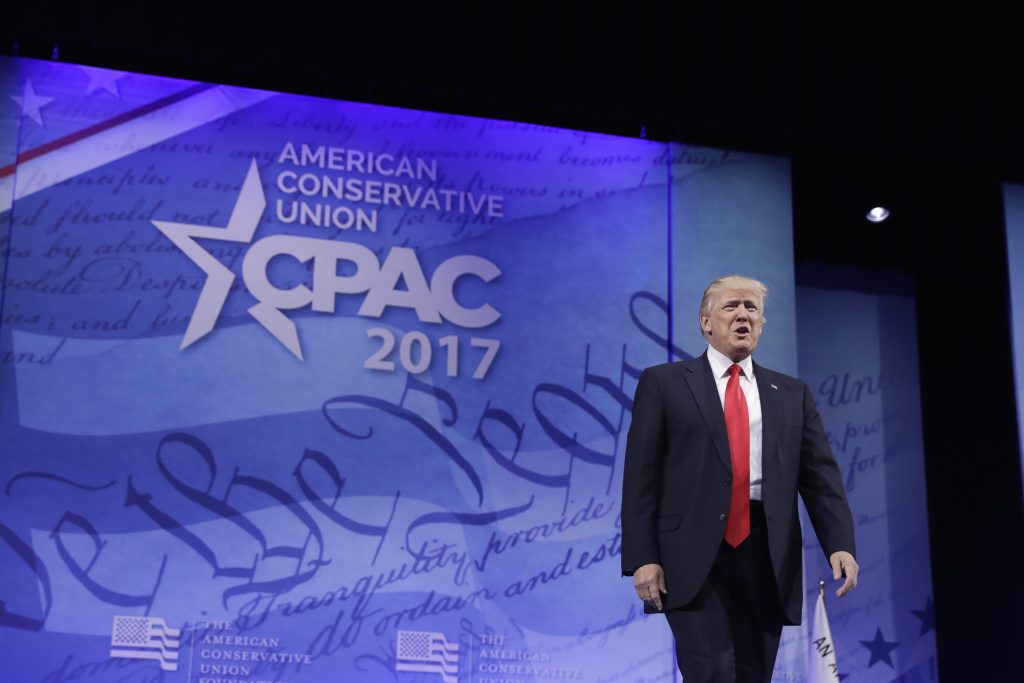 President Donald Trump declared himself among friends as he delivered a speech Friday at an annual gathering of conservative activists, where he told the crowd that the movement he built during his campaign represents the future of the Republican Party.

“Now you finally have a president, finally,” Trump said, later promising that “the forgotten men and women of America will be forgotten no more.”

With his appearance at the Conservative Political Action Conference in Maryland, Trump became the first sitting president since Ronald Reagan to address the group during his first year in office. After taking stage to Lee Greenwood’s “G-d Bless the U.S.A.,” Trump pledged to return often.

The wide-ranging speech amounted to a victory lap for Trump and a chance to recount his campaign promises as well as thank a wing of the party with which he has not always been in sync.

Trump, who campaigned as more of a populist than conservative, told his audience that his victory represented a “movement the likes of which the world has never seen before.”

“The core conviction of our movement is that we are a nation that put and will put its own citizens first,” Trump said, prompting the crowd to chant: “USA! USA!”

Trump’s speech followed several well-received appearances at the four-day gathering by senior members of his administration, including a speech Thursday night by Vice President Mike Pence.

The new president got a raucous reception from the crowd, which at one point started chanting “Lock her up” after Trump derided Hillary Clinton, his Democratic opponent in last year’s election, for describing some of Trump’s supporters as “deplorables.”

During his remarks, Trump said that in a matter of days, he would have a “brand new action” to keep the country safe, a reference to a second attempt at an executive order to restrict travel into the country from several majority-Muslim nations.

Trump cited a series of terrorist attacks overseas and said: “We have to be smart, folks. We can’t let it happen to us … We are going to keep radical Islamic terrorists … out of our country.”

“I will never ever, ever apologize for protecting the safety and security of the American people,” Trump said, adding that he’s even willing to get bad press for doing so.

Trump sought to portray his fledgling administration as one of action, ticking off multiple fronts on which he’s already moved: pulling out of a major trade deal, reducing regulations, cracking down on illegal immigrants and clearing the way for construction of major oil pipelines.

Trump also touted his efforts to “massively lower taxes” and replace the Affordable Care Act, which he called “the disaster known as Obamacare,” to great applause.

He also asserted that his presidency was already producing more jobs, and said it was time for all Americans to “get off of welfare and get back to work.”

He pledged “one of the greatest military buildups in American history” and to “totally obliterate” the Islamic State terror group.

“Nobody will dare question our military might again,” Trump said.

The president also pledged to revamp the country’s trade policies and reprised his core campaign promise of building a U.S.-Mexico border wall.

“For too long, we’ve traded away our jobs to other countries. We’ve defended other nations’ borders while leaving ours wide open,” Trump said, prompting cries to “build a wall.” Trump pledged that the construction of the wall on the U.S. border with Mexico would begin soon, even though it is unclear where the money to pay for it will come from.

“We’re going to build a wall; don’t worry about it,” the president said.

Trump used the opening of his remarks to again denounce the media, saying that many stories about his administration are “fake news” with stories that rely on anonymous sources. Trump pointed to a Washington Post story this month that cited nine current and former intelligence sources who said that Trump’s former National Security Adviser Michael Flynn discussed U.S. economic sanctions on Russia with that country’s ambassador before Trump took office.

Trump said that he didn’t believe there were nine sources. “They make up sources. They are very dishonest people,” Trump said. The Post’s stories helped lead to Flynn’s resignation after further disclosures that he had misled administration officials, including Vice President Pence, over the nature of his conversations.

Trump, who has taken a combative posture toward several media outlets, again derided CNN as the “Clinton News Network.”

Trump’s fledgling administration has given conservatives plenty to cheer about, including many Cabinet selections and Trump’s pledges to repeal the Affordable Care Act and pursue sweeping tax reform.

During his speech, he called his victory “a win for conservative values.”

The speech marked the fifth time Trump has addressed the conference hosted by the American Conservative Union, which is showcasing how he has pushed the Republican Party and the conservative movement toward an “America first” nationalism that has long existed on the fringes.

Trump’s first appearance in 2011 offered clues to his political ambitions.

“America today is missing quality leadership, and foreign countries have quickly realized this,” he said six years ago.

“[The] theory of a very successful person running for office is rarely tested because most successful people don’t want to be scrutinized or abused,” he said. “This is the kind of person that the country needs, and we need it now.”

In a speech Thursday night, Pence touted the Trump administration’s plans to repeal and replace the Affordable Care Act, declaring that “America’s Obamacare nightmare is about to end.”

Earlier in the day, Trump’s chief of staff, Reince Priebus, and Stephen K. Bannon, the White House chief strategist, made a joint appearance. They declared that, contrary to some press reports, they are working hand in hand toward what Bannon described as an unending battle for the “deconstruction of the administrative state.”