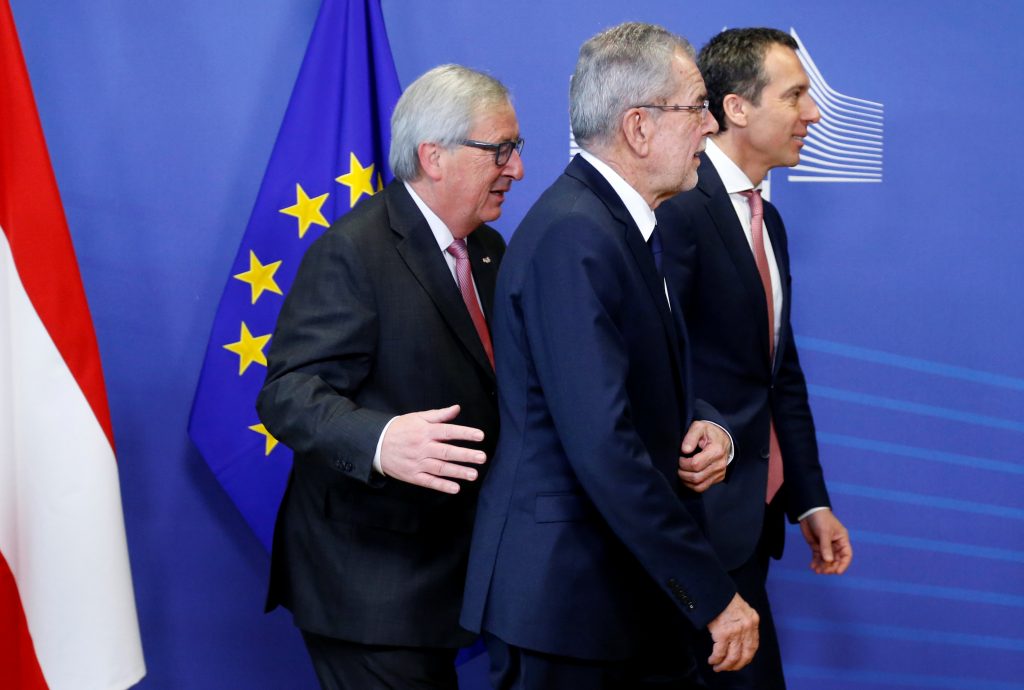 Britain should be charged about 60 billion euros ($63 billion) when it leaves the European Union, Austrian Chancellor Christian Kern said, becoming the first EU leader to put a value on the size of the U.K.’s Brexit bill.

While similar estimates have been circulating for months, Kern cited the sum as an EU calculation that will be presented to the U.K. government once Prime Minister Theresa May triggers Britain’s exit from the 28-nation bloc.

“The check should be around 60 billion euros; that’s what the European Commission has calculated, and this will be part of the negotiations,” Kern said in a Bloomberg interview in Vienna on Thursday. “There will be a lengthy debate about the check that has to be paid by the U.K., because 60 billion euros is a significant amount of money.”

Haggling over the bill looks set to mark a testy start to the negotiations once May invokes Article 50 of the Lisbon Treaty, something she has said she’ll do before the end of March. Britain’s Trade Secretary Liam Fox has called the idea of such a bill “absurd,” and the government in London is adamant it won’t pay for any EU projects signed after November.

While saying the EU shouldn’t seek to punish the British, Kern acknowledged the bill will be a hard sell for May’s government,” because the pledge to the British voters was that they were going to save a lot of money, and I think there will be a certain amount of disappointment or frustration if now the opposite happens.”

The money is not strictly a charge for leaving since the bill comprises various financial commitments made during the U.K.’s membership, such as pension obligations to EU officials and past pledges to the bloc’s budget and projects.

Greg Swift, May’s spokesman, told reporters in London that the final figure for the U.K.’s Brexit bill will be up for discussion when talks formally begin.

“Sixty billion is a figure that seems to be around,” Swift said. “These are the kinds of issues that will form part of the negotiations and the process of the U.K. exiting the European Union. The negotiations haven’t begun. This is an area that will be looked at as part of those negotiations.”

Kern also warned the U.K. against using the threat of becoming a tax haven as leverage. The British government has hinted it could slash corporation taxes to undercut the EU and lure companies to the U.K if it gets a bad deal out of Brexit.

“This would of course be a provocation,” Kern said. “If they start to reduce their corporate taxes to an unreasonable level, then there will be a certain reaction from Europe.”

The U.K. government has pledged to cut the main corporate-tax rate to 17 percent by 2020 from 20 percent at present and hinted at the possibility of further reductions if it doesn’t get its way in negotiations. May’s advisers have floated the idea of bringing it down to as little as 10 percent, the Sunday Times reported in October, taking it below Ireland’s 12.5 percent rate.

There will be “no free lunch for the British government,” he said. “They need access to the European market, and so they have to behave in a decent and reasonable manner.”

May’s spokesman Swift said the U.K. hadn’t provoked the EU by explicitly proposing to turn Britain into a tax haven for businesses if a good trade deal can’t be secured. “I don’t think we have ever explicitly said we would lower taxes,” he said. “There is a big difference between saying we will set competitive tax rates and saying we are cutting tax rates.”

The Brexit talks will be “lengthy,” and “not as easy as the British expect,” Kern said in an earlier interview with Bloomberg tv. He suggested that while agreement on terms of the U.K.’s withdrawal can be wrapped up within the scheduled two-year timeframe, it’s unrealistic to think the two sides can strike a deal over a wider trade pact in that period.

“The big difference is that Mrs. May and the British government believe that you can have a very general negotiation and come to a conclusion within two years,” he said. “The most favorable concept from the European point of view is first to talk about a treaty of withdrawal, to regulate the financial obligations and to clarify the situation of British citizens in Europe and in turn European citizens in Great Britain — this should be possible within two years.”

Only after that can the EU turn to discussions about transitional arrangements, foreign policy and a free-trade agreement, Kern said, echoing comments made by the EU’s chief Brexit negotiator, Michel Barnier.

“Brexit is not only about the relation to Great Britain, it’s about the role and unity of Europe itself, and so therefore it’s really a very sensitive negotiation procedure,” Kern said.