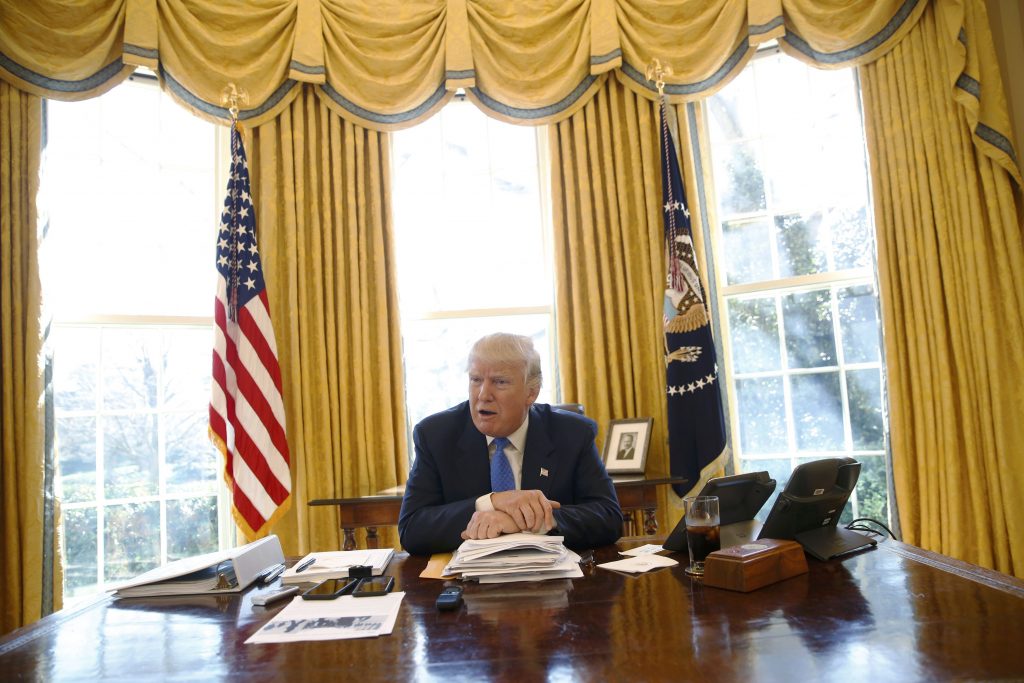 President Donald Trump said on Thursday he wants to ensure the U.S. nuclear arsenal is at the “top of the pack,” saying the United States has fallen behind in its weapons capacity.

In a Reuters interview, Mr. Trump also said China could solve the national security challenge posed by North Korea “very easily if they want to,” ratcheting up pressure on Beijing to exert more influence to rein in Pyongyang’s increasingly bellicose actions.

The president also expressed support for the European Union as a governing body, saying “I’m totally in favor of it,” and for the first time as president expressed a preference for a two-state solution to the Israeli-Palestinian conflict, but said he would be satisfied with whatever makes the two sides happy.

In his first comments about the U.S. nuclear arsenal since taking office on Jan. 20, Mr. Trump was asked about a December tweet in which he said the United States must greatly strengthen and expand its nuclear capacity “until such time as the world comes to its senses regarding nukes.”

Mr. Trump said in the interview he would like to see a world with no nuclear weapons but expressed concern that the United States has “fallen behind on nuclear weapon capacity.”

“It would be wonderful, a dream would be that no country would have nukes, but if countries are going to have nukes, we’re going to be at the top of the pack,” Trump said.

Russia has 7,000 warheads and the United States, 6,800, according to the Ploughshares Fund, an anti-nuclear group.

“The history of the Cold War shows us that no one comes out ‘on the top of the pack’ of an arms race and nuclear brinkmanship,” said Daryl Kimball, executive director of the independent Arms Control Association non-profit group.

“Russia and the United States have far more weapons than is necessary to deter nuclear attack by the other or by another nuclear-armed country,’ he said.

The new strategic arms limitation treaty, known as New START, between the United States and Russia requires that by February 5, 2018, both countries must limit their arsenals of strategic nuclear weapons to equal levels for 10 years.

The treaty permits both countries to have no more than 800 deployed and non-deployed land-based intercontinental and submarine-launched ballistic missile launchers and heavy bombers equipped to carry nuclear weapons, and contains equal limits on other nuclear weapons.

Analysts have questioned whether Mr. Trump wants to abrogate New START or would begin deploying other warheads.

In the interview, the president called New START “a one-sided deal.”

“Just another bad deal that the country made, whether it’s START, whether it’s the Iran deal … We’re going to start making good deals,” he said.

The United States is in the midst of a $1 trillion, 30-year modernization of its aging ballistic missile submarines, bombers and land-based missiles, a price tag that most experts say the country cannot afford.

Mr. Trump also complained that the Russian deployment of a ground-based cruise missile is in violation of a 1987 treaty that bans land-based American and Russian intermediate-range missiles.

Asked if he would raise the issue with Putin, Mr. Trump said he would do so “if and when we meet.” He said he had no meetings scheduled as of yet with Putin.

Speaking from behind his desk in the Oval Office, Mr. Trump expressed concern about North Korea’s ballistic missile tests and said accelerating a missile defense system for U.S. allies Japan and South Korea was among many options available.

“There’s talks of a lot more than that,” he said, when asked about the missile defense system. “We’ll see what happens. But it’s a very dangerous situation, and China can end it very quickly in my opinion.”

China has made clear that it opposes North Korea’s nuclear and missile programs and has repeatedly called for denuclearization of the Korean peninsula and a return to negotiations between Pyongyang and world powers.

But efforts to change Pyongyang’s behavior through sanctions have historically failed, largely because of China’s fear that severe measures could trigger a collapse of the North Korean state and send refugees streaming across their border.

The president’s meeting with Japanese Prime Minister Shinzo Abe earlier this month in Florida was interrupted by a ballistic missile launch by North Korea.

Mr. Trump did not completely rule out possibly meeting North Korean leader Kim Jong Un at some point in the future under certain circumstances but suggested it might be too late.

“It’s very late. We’re very angry at what he’s done, and frankly this should have been taken care of during the Obama administration,” he said.

The strength of Mr. Trump’s remarks in favor of the EU took some Brussels officials by surprise after his support for Britain’s vote last summer to exit from the EU.

Statements by him and others in his administration have suggested to Europeans that he sees little value in the Union as such, which Mr. Trump last month called a “vehicle for Germany.”