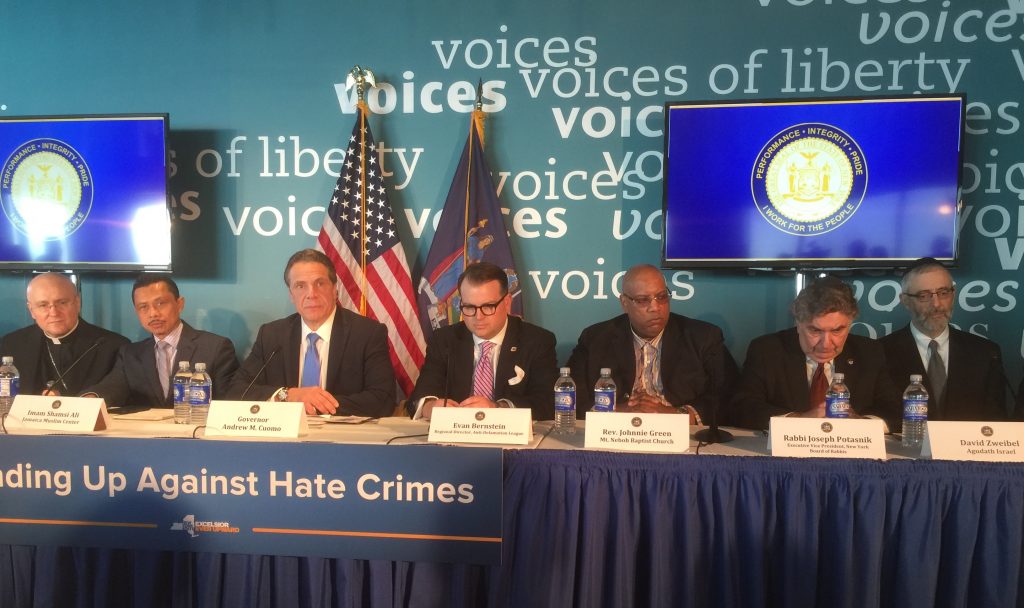 The initiatives include a request that the state legislature provide $25 million to religious schools for security purposes, including cameras, security guards and alarms; the establishment of a $5,000 reward for any information that leads to the capture and conviction of a perpetrator of a hate crime; and the establishment of a text tipline, to which people can report a hate crime by texting information to 81336. The text tipline is in addition to a phone hotline that was established in November for reporting hate crimes. The hotline has 46 dedicated investigators across the state responding to reports of hate crimes, and has received 3,175 calls since its inception, according to New York state Police Superintendent George Beach. Cuomo also directed the New York State Police to coordinate its investigation into a recent rash of anti-Semitic incidents with local police forces and the FBI.

Cuomo announced the initiatives Thursday afternoon at a press conference at the Museum of Jewish Heritage-A Living Memorial to the Holocaust in Lower Manhattan, after a roundtable meeting earlier in the day with Jewish and other religious leaders, and members of the New York State Police.

The announcement came a day after a bomb threat was called in to the Anti-Defamation League’s Manhattan headquarters, and several days after the desecration of over 150 tombstones at a Jewish cemetery in Missouri. These were the latest in a spate of recent anti-Semitic incidents across the country, which have included bomb threats to Jewish Community Centers, swastikas scrawled on New York City subways and KKK leaflets distributed on Long Island.

“These actions are shocking, they’re revolting and they demand a response,” said Cuomo,” who called the incidents “reprehensible, immoral, cowardly, anti-American and anti-New York.”

“From where we sit right now,” said Cuomo, from a room in the Museum with a view of New York Harbor, “the Statue of Liberty is visible … and she holds the torch high. We live in New York by the nation’s founding premise: E Pluribus Unum – Out of many, one. That is the founding premise of this nation, and it’s the enduring promise of the great state of New York. One nation indivisible. Well we are one state, indivisible.”

At the press conference, Cuomo was flanked by Jewish communal leaders, as well as leaders of the Muslim and Christian communities, in an interfaith display of solidarity against all forms of racism.

Evan Bernstein, Regional Director of the ADL, thanked everyone for “the wave of support that we received, in what was an incredibly difficult day for us” following the bomb threat.

“We are all New Yorkers,” declared Rev. Johnnie Green, of the Mt. Neboh Baptist Church. “We stand as one.”

Green noted that his fellow African Americans have also experienced much racism in their history, and said, “We stand arm in arm, shoulder to shoulder with our Jewish brothers and say no to hate and to anti-Semitism.”

“In a time when our Jewish brothers and sisters face” these threats, said Imam Shamsi Ali of the Jamaican Muslim Center, “as a Muslim I am standing with them, tall and strong.”

“There is something about the desecration of the cemetery that was just horrible,” said Bishop James Massa, of the Diocese of Brooklyn. “As if someone was trying to erase the memory of the Jewish community and the Jewish People. That is simply intolerable.”

“This funding is extremely important,” said Rabbi Chaim Dovid Zwiebel, executive vice president of the Agudath Israel of America. “These are dangerous times and we need to harden our institutions. This special allocation will help us do so.”

“Unfortunately, the recent spate of bomb threats against Jewish institutions across the country underscores the real dangers too many schools face” said Allen Fagin, CEO of the Orthodox Union. “We applaud the governor for recognizing the threat to our children and for acting with deliberation and care to mitigate it.”