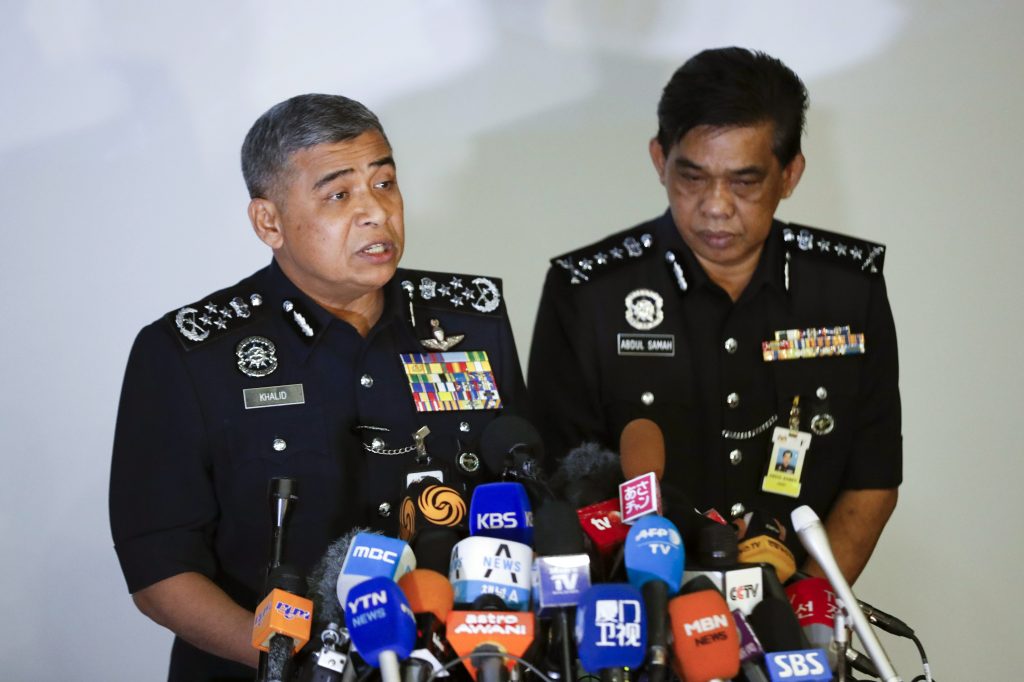 The two women suspected of fatally poisoning a scion of North Korea’s ruling family were trained to coat their hands with toxic chemicals and then wipe them on his face, police in Malaysia said Wednesday, announcing they were seeking a North Korean diplomat in connection with the attack.

But the North Korean Embassy ridiculed the police account of Kim Jong Nam’s death at a Malaysian airport, demanding the immediate release of the two “innocent women.”

If the toxins had been on their hands “then how is it possible that these female suspects could still be alive?” demanded a statement from North Korea’s embassy in Kuala Lumpur. Police say the women – one of them Indonesian, the other Vietnamese – washed their hands soon after poisoning Mr. Kim, the long-estranged half brother of the North Korean ruler.

“We hope that the Korean Embassy will cooperate with us, allow us to interview them and interview them quickly,” he said. “If not, we will compel them to come to us.”

Police say the substance used remains unknown, but it was potent enough to kill Mr. Kim before he could even make it to a hospital.

Mr. Khalid said the women knew they were handling poisonous materials and “were warned to take precautions.” Surveillance video showed both keeping their hands away from their bodies after the attack, he said, then going to restrooms to wash. Those details are not clear in video obtained by media outlets.

He said the women had practiced the attack at two Kuala Lumpur malls.

“We strongly believe it is a planned thing and that they have been trained,” he told reporters.

Mr. Khalid couldn’t confirm whether North Korea’s government was behind Mr. Kim’s death but added, “What is clear is that those involved are North Koreans.”

He also said a heavily armed special police force was deployed to the morgue holding Kim Jong Nam’s body after police detected an attempt to break into the facility. He declined to give details, but local media reported that a South Korean cameraman was detained briefly outside the morgue after he was found without any identification documents. He was released after a colleague confirmed his identity.

The North Korean Embassy’s statement was aimed at getting at least a little of the country’s spin in international coverage of the killing. It questioned the fairness of the Malaysian investigation, which it has alleged is based on lies and biased presumptions and has been tainted by South Korean influence. While that approach hasn’t been particularly persuasive, it can create some level of doubt over what local authorities have found and cast doubt on whatever more concrete links to North Korea they may announce as the investigation progresses.

Police have already arrested four people in connection with the attack: a Malaysian, a North Korean and the two women. The Malaysian was to be freed Wednesday on bail, Mr. Khalid said.

At least one of the women has said she was tricked into attacking Kim Jong Nam, believing she was taking part in a comedy prank show. While the North Korean statement also raised this possibility, saying it could have been done “for a joke,” Mr. Khalid rejected that claim. “This is not just like shooting a movie,” he said.

One of female suspects, Doan Thi Huong, 28, was posting to a social media page under the name Ruby Ruby, according to her niece, Dinh Thi Quyen.

Photos on the page show Doan Thi Huong, who is Vietnamese, wearing a white shirt that appears to say “LOL,” like the one seen on security camera video during the attack. It shows her posing for selfies in Kuala Lumpur a few days before the incident and last month in Phnom Penh, Cambodia.

Her last post was on the morning of Feb. 11, two days before the attack, from an area near the airport.

Police are looking for seven other North Korean suspects in connection with the attack, including the two announced Wednesday. The embassy official and the airline employee are among three North Koreans believed to still be at large in Malaysia.

The four others are believed to have fled Kuala Lumpur shortly after the attack. Khalid said authorities believe they are back in North Korea, and that they provided the toxin.

“That’s why we asked the North Korean Embassy to trace them and hand them over to us,” he said, adding that Malaysian authorities had received no help from North Korea.

The case has perplexed toxicologists, who question how the two women could have walked away unscathed after handling a powerful poison.

Kim had spent most of the past 15 years living in China and Southeast Asia. No family members have come forward to claim the body.

South Korea’s spy agency believes North Korea was behind the killing, but has produced no evidence.

North Korea has a long history of ordering killings of people it views as threats to its regime. While Kim Jong Nam was not thought to be seeking influence, his position as eldest son of the family that has ruled North Korea since its founding could have made him appear to be a danger.

He was at the airport to fly to Macau, where he had a home.