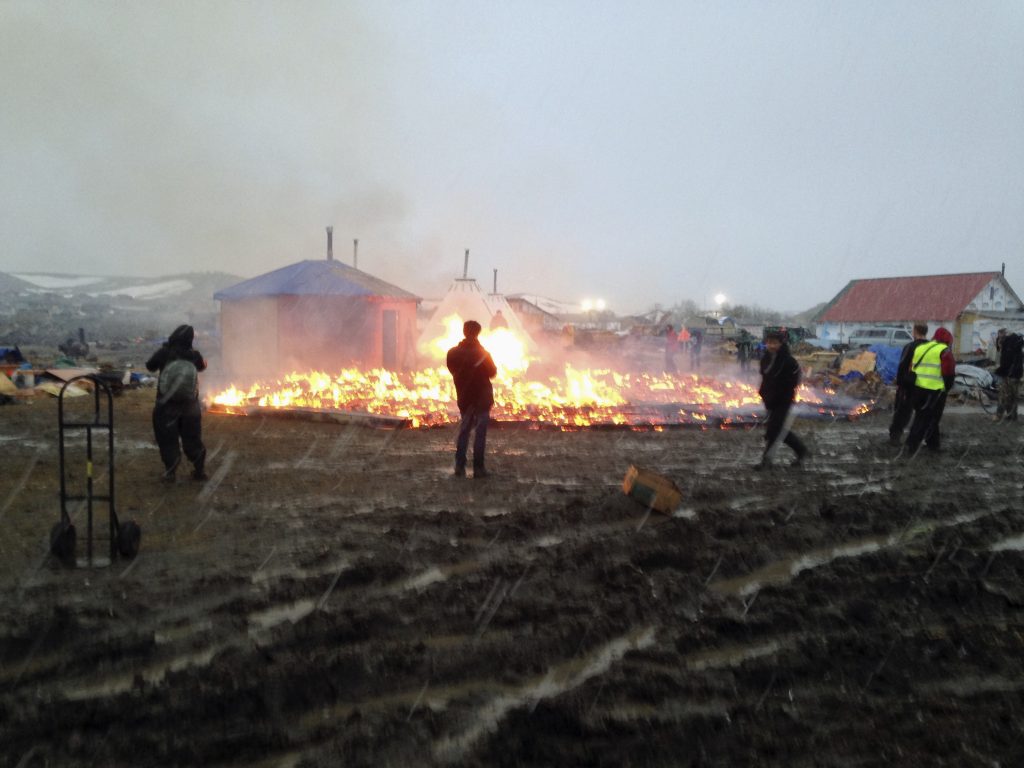 The last people remaining at a Dakota Access pipeline protest camp prayed and set fire to a handful of wooden structures on Wednesday, hours ahead of a deadline set by the Army Corps of Engineers to close the camp.

Some of the praying protesters said burning the structures – which appeared to include a yurt and a teepee – was part of the ceremony of leaving. As heavy rain turned to snow, some said they expected no trouble during the eviction, despite a heavy law enforcement presence.

“People are being very mindful, trying very hard to stay in prayer, to stay positive,” said Nestor Silva, 37, of California. “I am not aware of any plans for belligerence.”

The Corps has set a 2 p.m. deadline for the camp to be emptied ahead of potential spring flooding. A massive cleanup effort has been underway for weeks, first by protesters themselves and now with the Corps set to join in removing debris left over several months.

Wednesday’s deadline for the protesters to leave also may not spell the end of the heavy law-enforcement presence near where Dallas-based Energy Transfer Partners is finishing the last section of the pipeline, which will carry oil from North Dakota through the Dakotas and Iowa to a shipping point in Illinois.

The protest camp is on federal land in southern North Dakota between the Standing Rock Sioux Reservation and the pipeline route. It has at times housed thousands of people, though it’s dwindled to just a couple of hundred, as the pipeline battle has largely moved into the courts.

Morton County sheriff’s spokeswoman Maxine Herr warned that there could be large-scale arrests at the camp, while insisting that is not what authorities want.

“We prefer to handle this in a more diplomatic, understanding way,” spokeswoman Herr said, adding that a transition center will be set up to help protesters who don’t have a place to go.

Some protesters plan to move, but some are ready to go to jail and “will engage in peaceful, civil resistance … holding hands, standing in prayer,” said American Indian activist Chase Iron Eyes.

More than 700 protest-related arrests have occurred since August, though activity has recently waned.

While some in the camp feel “under threat” by Wednesday’s deadline, most are focusing on moving off federal land and away from the flood plain, said Phyllis Young, one of the camp leaders.

“The camps will continue,” she said. “Freedom is in our DNA, and we have no choice but to continue the struggle.”

Other camps are popping up on private land in the area, including one the Cheyenne River Sioux has set up, about a mile from the Oceti Sakowin camp. Mr. Silva, the California protester, was among those who said he planned to simply move there.

“A lot of our people want to be here and pray for our future,” tribal Chairman Harold Frazier said.

Others, including Dom Cross, an Oglala Sioux from Pine Ridge, South Dakota, said he planned to return home after living at the camp since September.

“There’s a lot of sadness right now. We have to leave our second home,” he said.

Authorities are bringing in buses to take protesters to Bismarck, where they will be offered assistance, including water and snacks, a change of clothing, bus fare home, and food and hotel vouchers.

Once the main camp is cleared of people, the cleanup of trash and debris that’s being coordinated by the tribal, state and federal governments will continue. More than 1,000 tons of waste had been removed by contractors as of early Tuesday, though dozens of semi-permanent structures remained, according to Maxine Herr. Dozens of abandoned vehicles also remained, according to George Kuntz, vice president of the North Dakota Towing Association.

Law enforcement has maintained a staging area just north of the protest camp for months. With cleanup continuing, construction ongoing and protesters still in the area, it’s unclear when the operations center will be shut down.

“That will be a tactical decision,” said Mike Nowatzki, a spokesman for Gov. Burgum.