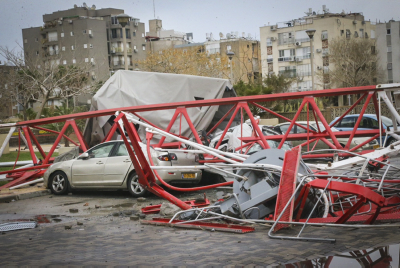 After the third crane accident on Sunday in Israel in a week, the Histradrut labor union announced that all crane operators in Israel would go on strike for one day on Thursday. The labor action is a “warning” strike, with the union saying that it would take more aggressive action if negotiations do not progress on improving their work conditions. B’chasdei Shamayim, no one was injured in Sunday’s crane mishap in Ashdod.

The strike is being fully supported by the union, after months of deadlocked negotiations on a new contract for the 1,200 crane operators in Israel. With the strike, thousands of building sites will be shut down on Thursday, as progress on construction will be impossible without the cranes. Histadrut head Avi Nissenkorn said that striking crane operators would be compensated for their time off from the union’s strike fund. Instead of working, crane operators will hold meetings discussing their labor issues, he said.

“Over 400 workers lost their lives operating cranes over the last decade, in a profession that has become the most dangerous in Israel,” said Mr Nissenkorn. “We have had enough of the cheapening of human life. A lack of safety enforcement and a casual attitude toward enforcing safety rules are just symptoms of a totally unregulated industry, where most workers are employed based on individual contracts and do not have rights that union members do. The workers who are building the country are endangering their lives and cannot earn enough money to pay their bills.”

The latest victims of a crane disaster were badly injured last week, when a crane toppled in Bat Yam. Four people were injured in the incident, including the crane operator, who was critically injured.

In charge of enforcing safety rules is a cadre of building inspectors who work for the Welfare and Housing Ministries, but in a December letter to Welfare Minister Chaim Katz and Mr. Nissenkorn, the director of safety in the Welfare Ministry said that workers were frustrated at the conditions of their employment, and at their inability to correct problems. Resources were extremely limited; for example, two years after inspectors were promised 16 new vehicles to carry out inspections, only three have materialized. “As a result, we are being asked to file the paperwork for these vehicles a second time, but meanwhile we do our job in our own cars, at our own expense, visiting faraway building sites,” the letter said. “Of course, we are responsible for the damage to our own vehicles under these circumstances.”

One suggestion made by Mr. Katz has been to use drones to conduct inspections, to save the Ministry time and money – and workers, naturally, are against the idea. “Maybe eventually drones will be able to examine the 30,000 building sites that get licenses to build annually, and to thoroughly inspect 200,000 elevator shafts, but until that happens, we are doing the job, but we will not continue to do it for the low salary and long hours we face,” the letter said.

Until some solutions are found, however, the union said that it needs to protect workers. “The struggle for the rights of crane operators is a struggle over what Israeli society will look like,” said Mr. Nissenkorn ahead of Thursday’s strike. “The Histadrut has taken upon itself to fight for the rights of crane operators, and all construction workers, and will use whatever means are at its disposal to protect these workers with a collective bargaining agreement that provides for the safety of workers.”