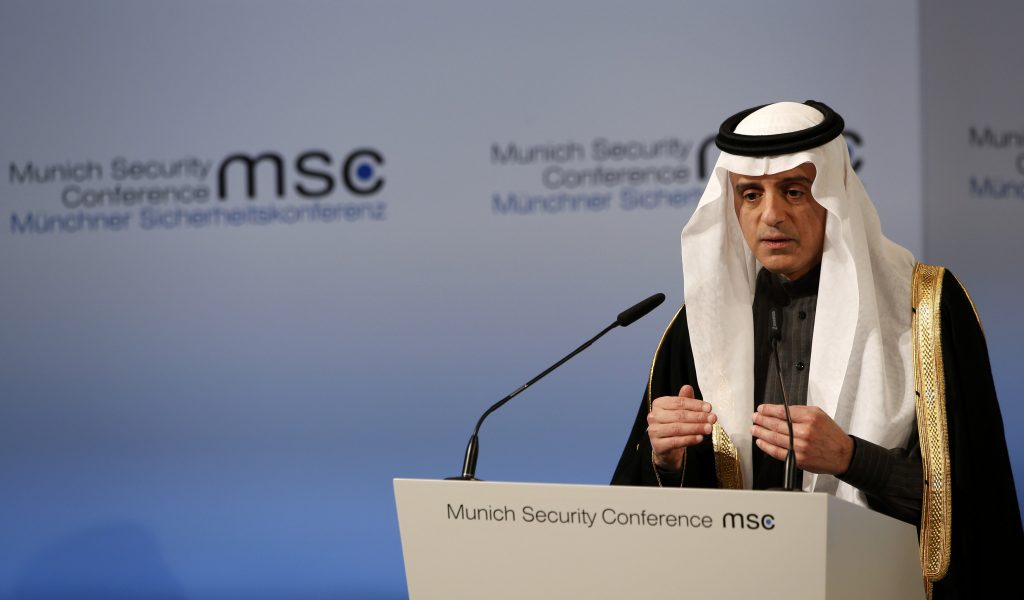 Saudi Arabia and Israel both called on Sunday for a new push against Iran, signaling a growing alignment in their interests, while U.S. lawmakers promised to seek new sanctions on the Shi’ite Muslim power.

Turkey also joined the de facto united front against Tehran as Saudi and Israeli ministers rejected an appeal from Iranian Foreign Minister Mohammad Javad Zarif for Sunni Gulf Arab states to work with Tehran to reduce violence across the region.

While Saudi Arabia remains historically at odds with Israel, their ministers demanded at the Munich Security Conference that Tehran be punished for propping up the Syrian government, developing ballistic missiles and funding separatists in Yemen.

International sanctions on Iran were lifted a year ago under a nuclear deal with world powers, but Republican senators said at the conference they would press for new U.S. measures over the missiles issue and Tehran’s actions to “destabilize” the Middle East.

He sidestepped a question about Israel’s call for concerted action with Sunni Arab states amid growing speculation that the two countries could normalize relations and join forces to oppose Tehran, much as Turkey has done.

The six Arab members of the Gulf Cooperation Council (GCC), especially Saudi Arabia, accuse Iran of using sectarianism to interfere in Arab countries and build its own sphere of influence in the Middle East. Iran denies the accusations.

“Iran remains the single main sponsor of terrorism in the world,” Adel al-Jubeir told delegates at the conference. “It’s determined to upend the order in the Middle East … (and) until and unless Iran changes its behavior it would be very difficult to deal with a country like this.”

Al-Jubeir said Iran was propping up the government of President Bashar al-Assad in the Syrian civil war, funding the Houthi movement in Yemen and fomenting violence across the region.

Israeli Defense Minister Avigdor Liberman said Iran’s ultimate objective was to undermine Riyadh, and called for a dialogue with Sunni Arab countries to defeat “radical” elements in the region.

“The real division is not Jews, Muslims … but moderate people versus radical people,” Liberman told delegates.

“Turkey is very much against any kind of division, religious or sectarian,” he said. “It’s good that we are now normalizing our relations with Israel.”

U.S. Senator Lindsey Graham, a South Carolina Republican, said he and other senators were preparing legislation to further sanction Iran for violating U.N. Security Council resolutions with its missile development program and other actions.

“It is now time for the Congress to take Iran on directly in terms of what they’ve done outside the nuclear programme,” he said.

Senator Christopher Murphy, a Democrat and member of the Senate Foreign Relations Committee, said Washington needed to decide whether to take a broader role in the regional conflict.

“We have to make a decision whether we are going to get involved in the emerging proxy war in a bigger way than we are today, between Iran and Saudi Arabia,” he said.