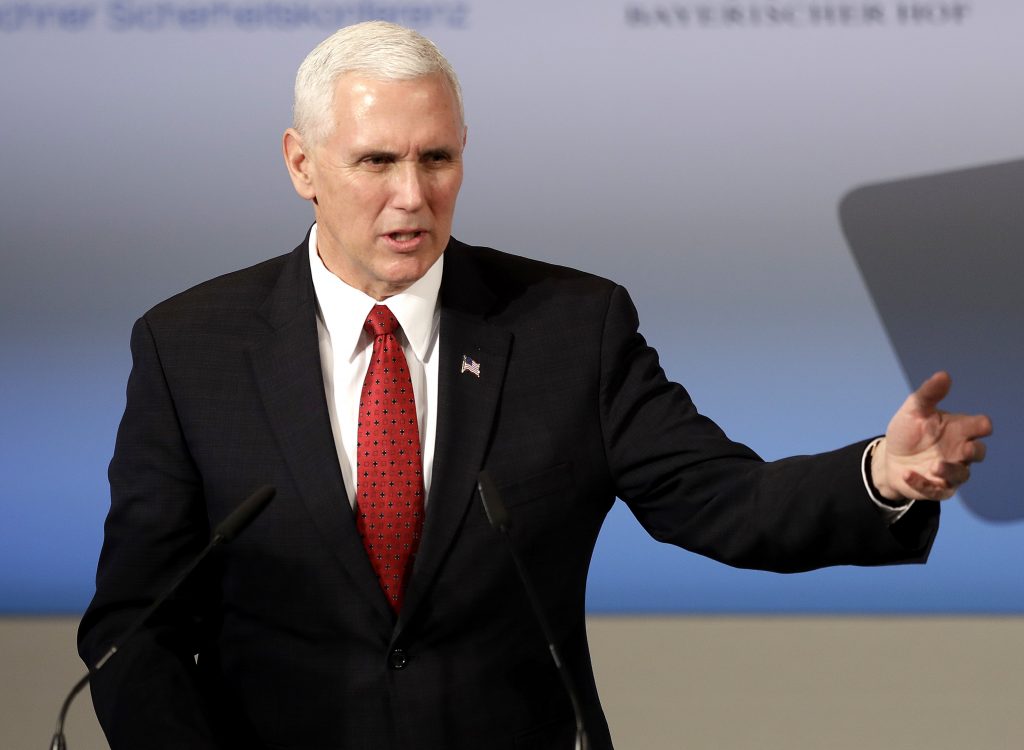 America’s commitment to NATO is “unwavering,” Vice President Mike Pence said Saturday, reassuring allies about the direction the Trump administration might take but leaving open questions about where Washington saw its relationship with the European Union and other international organizations.

German Chancellor Angela Merkel called for strengthening a range of multilateral bodies — the EU, NATO and the United Nations — and lauded the benefits of “a free, independent press.”

Pence told the Munich Security Conference, an annual gathering of diplomats and defense official, “I bring you this assurance: The United States of America strongly supports NATO and will be unwavering in our commitment to our trans-Atlantic alliance.”

Chancellor Merkel, speaking before VP Pence, told him and other leaders that “acting together strengthens everyone.”

Her address came amid concerns among allies about President Trump administration’s approach to international affairs and fears that the U.S. may have little interest in working in international forums.

“Will we be able to continue working well together, or will we all fall back into our individual roles?” Merkel asked. “Let’s make the world better together and then things will get better for every single one of us.”

President Trump has praised Britain’s decision to leave the 28-nation EU. And a leading contender to be the next U.S. ambassador to the EU, Ted Malloch, has said Washington is “somewhat critical and suspicious” of the bloc and would prefer to work with countries bilaterally.

VP Pence did not mention the European Union in his speech, something picked up on by French Foreign Minister Jean-Marc Ayrault, who wrote on social media: “In Munich, Vice President Pence renews America’s commitment to the Atlantic alliance. But not a word on the EU.”

VP Pence did say, however, that the U.S. was on a path of “friendship with Europe and a strong North Atlantic alliance.”

German Foreign Minister Sigmar Gabriel also indicated skepticism about Pence’s pledges, saying that he agreed Europe needed to work with the U.S. on the basis of common values. But in a barely veiled reference to President Trump, he said “both countries must define their interests, and our foreign policies should not be driven by ideology.”

“Ideologies lead to hostile concepts that might not be able to be overcome,” said Gabriel, who is chairman of the Social Democratic Party, Merkel’s junior coalition partner.

Going ahead, he said Europeans “should hope for the best, but prepare for the worst.”

In pledging President Trump administration’s support for NATO, Pence said the U.S. expected all countries to live up to commitments to spend at least 2 percent of gross domestic product spending on defense.

“Europe’s defense requires your commitment as much as ours,” he said.

Merkel reiterated that Germany is committed to the 2 percent goal though Germany currently only contributes about 1.3 percent.

“We will do everything we can in order to fulfill this commitment,” she said. “But let me add, however, that I believe while NATO is very much in the European interest, it’s also in the American interest — it’s a very strong alliance where we are united together.”

Gabriel suggested that development aid and humanitarian moves — such as in Germany’s decision to take in nearly 900,000 refugees last year — should also be part of the consideration when looking at defense spending.

NATO Secretary General Jens Stoltenberg told The Associated Press, however, that both things were necessary.

“We need the military power of the United States,” she said.

She renewed a call for Islamic religious authorities to speak “clear words on the demarcation of peaceful Islam and terrorism in the name of Islam.”

U.S. Homeland Security Secretary John Kelly told the security conference that President Trump is working on a “streamlined” version of his executive order banning travel from seven predominantly Muslim nations to iron out the difficulties that landed his first order in the courts.

Kelly said next time President Trump will “make sure that there’s no one caught in the system of moving from overseas to our airports” during the travel ban.

The nations affected by the original ban were Iran, Iraq, Libya, Somalia, Sudan, Syria and Yemen. Kelly mentioned “seven nations” again on Saturday, leading to speculation they will all be included in President Trump’s next executive order on immigration.