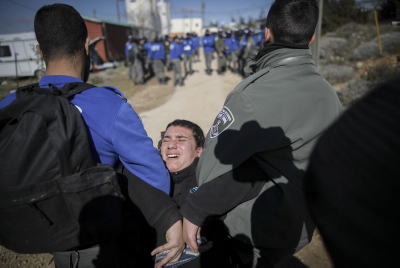 Reports Thursday said that Prime Minister Netanyahu was “reconsidering” his promise to Amona residents to build them a new settlement. According to reports, PM Netanyahu told President Trump in their meeting Wednesday that he planned to hold off on the decision to build the settlement, as promised when they were evicted from their homes by court order several weeks ago.

As an alternative, residents of the Adei Ad outpost, where several homes are slated for demolition, are seeking help from the former residents of Amona. Adei Ad residents believe their hilltop is the right place for the Amona evictees. In a letter, the Adei Ad residents say that there is an “urgent need to populate the areas of this hilltop that we can legally settle in order to ensure the stability of Adei Ad.” While it would be understandable if they preferred to settle somewhere less controversial, considering their experience, the Adei Ad residents wrote that their new neighbors “would be welcome in all ways, and especially loved in any way they could think of.”

Meanwhile, barely a week after it was passed into law, the state asked the High Court to hold off on issuing demolition orders on homes in a Binyamin-area outpost, in order to allow for the possibility of arranging the legality of the homes. “As a result of the passage of the Settlements Arrangement Law, the state requires time to determine if the homes in question are eligible for protection under the law,” the state said in its request to the court.

At question are six homes in the Adei Ad outpost located outside “recognized state lands.” Although no Palestinians have yet filed a claim to the land, the fact that the homes are not on state land implies that they could be on private land, making them eligible for demolition. A petition was filed by leftist groups against the presence of the homes, as well as the rest of the outpost, as it had not been officially sanctioned by the state.

Under the Settlements Arrangement Law, homes built on land claimed by Palestinians will remain in place, unless they can produce definitive proof that they own the land. Previously, a claim was sufficient cause for the High Court to issue a demolition order. The law also has a provision that allows the state to classify unclaimed land that homes are built on as state land, and that is the provision that would apply in the current case. If claimants crop up afterwards, they will receive compensation equivalent to 125 percent of the value of their claim, either in cash or in land.

Although petitions have been filed against the law, the state said that it remains on the books until a court decision is made on its constitutionality, and on that basis the law should apply to the homes, at least for now.

Legal opinions on whether or not the court will declare the law illegal are varied, with some legal experts, like former Justice Minister Daniel Friedman, saying he expected the court to strike it down, he told Army Radio. On the other hand, Justice Minister Ayelet Shaked, one of the sponsors of the bill, said that legal experts from Israel and abroad had examined the law in depth, and believed that it could be defended legally.

The only problem with that is that the man who is supposed to do that defending – State Attorney Avichai Mandelblit – has said that he is not prepared to defend the law before the High Court, a stance that backers of the bill have condemned, but is likely to have an impact on how the court sees the bill, legal experts said.

Speaking on Israel Radio, Tourism Minister Yariv Levin said that after many years as an attorney, “I am still searching high and low for this document that everyone refers to. The bottom line is that Israel has no constitution, and the attempts to force a constitution on Israelis by a small group of judges who elect themselves in backroom decisions and impose their will on the rest of us is as undemocratic a process as I can imagine.”