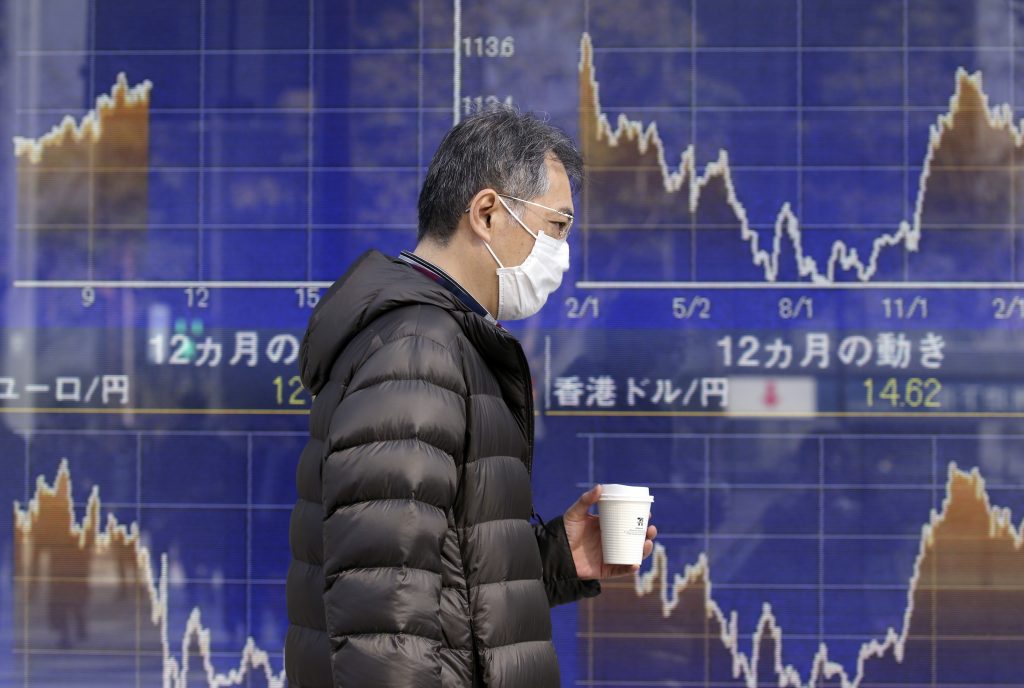 Asian stock markets took a breather on Friday from their recent surge as investors booked profits, while the dollar inched up after Thursday’s slide, and optimism over possible renewed supply cuts by OPEC lifted oil prices.

MSCI’s broadest index of Asia-Pacific shares outside Japan pulled back 0.2 percent, on track to end the week up 1.2 percent, its fourth straight weekly gain.

President Donald Trump’s first solo news conference on Thursday, where he adopted a combative stance against the news media and deflected questions about contacts between his presidential campaign and Russian operatives, also gave investors pause.

“Apart from a reflection of the slight easing in U.S. market momentum after several strong days, investors are making some greater allowance for rising risk,” said Angus Gluskie, managing director of White Funds Management in Sydney. “Trump’s erratic performance in the press conference has had a destabilizing influence on investor confidence.”

The arrest of Samsung Group chief Jay Y. Lee over his alleged role in a government corruption scandal is also a source of concern, Gluskie said.

Until Thursday, the index had beaten its previous intraday highs for seven consecutive sessions, and closed at 19-month highs in the past two.

A batch of positive economic data out of Asia this week, driven by improving exports and rising commodity prices, has bolstered shares, although concerns linger that any protectionist threats posed by Trump could reverse the recovery.

On Friday, Singapore revised its fourth-quarter gross domestic product growth sharply higher. Earlier in the week, Taiwan raised its 2017 economic growth target to a three-year high, Indonesia’s January exports rose at the fastest pace in more than five years and China’s January inflation picked up by more than expected to near six-year highs.

Japan’s Nikkei closed 0.6 percent lower, down 0.7 percent for the week. Australian shares fell 0.2 percent at the close, shrinking the week’s gains to 1.5 percent.

Chinese shares slipped after earlier touching a near two-month high after the securities regulator said that, starting Friday, it will relax certain rules on stock index futures trading as restrictions imposed during the 2015 stock market crash are unwound.

The CSI 300 index lost 0.4 percent after gaining as much as 0.5 percent, on track for a weekly advance of the same magnitude.

Hong Kong shares dropped 0.7 percent, but are still poised to close up 1.6 percent for the week.

The dollar edged up, but remained near the one-week low hit on Thursday, when it posted its biggest one-day drop in more than two weeks, as uncertainty about the timing of the next Federal Reserve rate hike offset the impact of stronger economic data.

Manufacturing activity in the U.S. Mid-Atlantic region surged to its highest in 33 years, housing data indicated a recovery in the sector was on track, and weekly jobless claims pointed to a labor market that continues to tighten.

But traders concluded that Fed Chair Janet Yellen’s economic testimony before Congress on Wednesday didn’t offer enough conviction that the central bank would raise rates at its next meeting in March.

The dollar climbed almost 0.2 percent on Friday to 113.41 yen, up by the same percentage for the week. It lost about 0.8 percent on Thursday.

The dollar index, which tracks the greenback against a basket of trade-weighted peers, was fractionally higher at 100.49, on track to end the week 0.3 percent lower. It tumbled 0.7 percent on Thursday.

The euro was little changed at $1.0671 on Friday, retaining Thursday’s 0.7 percent gain, and set to end the week 0.3 percent higher.

The stronger dollar on Friday weighed on gold, which slipped 0.1 percent to $1,237.36 an ounce. But the precious metal remains poised for a 0.3 percent rise for the week.

Oil prices built on Thursday’s gains, driven by a report that the Organization of Petroleum Exporting Countries may consider extending its oil supply-reduction pact with nonmembers and may even apply deeper cuts if inventories don’t fall to a targeted level.

For now, that optimism appears to be winning the tug of war with concerns over a rise in U.S. production, but the worry is set to leave oil prices with a weekly loss.