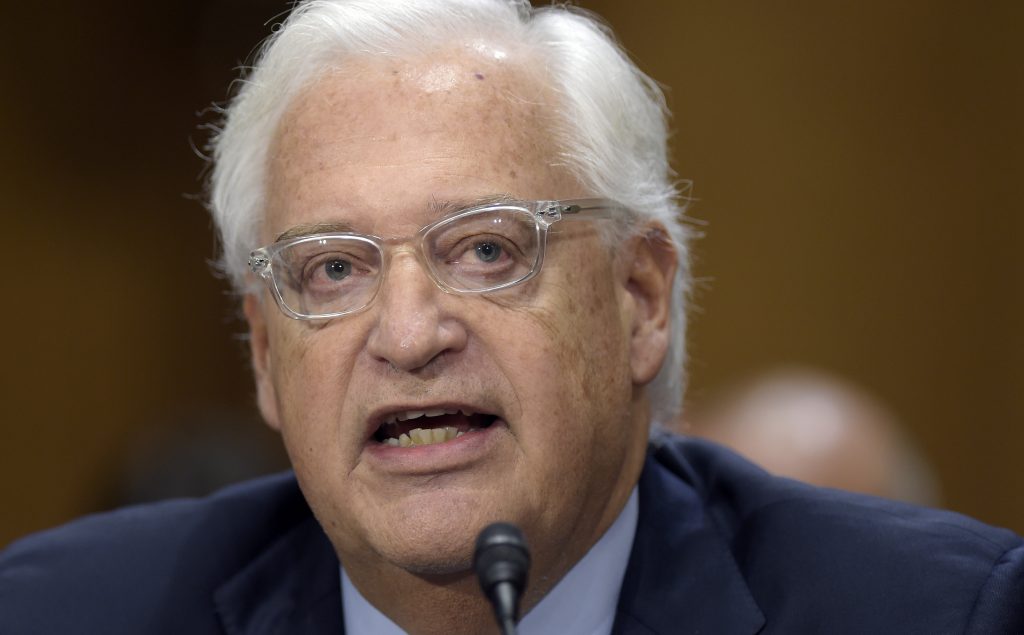 President Donald Trump’s nominee to be U.S. ambassador to Israel faced repeated heckling at a Senate confirmation hearing on Thursday, as well as tough questions on views he has expressed about liberal American Jews, Jewish settlements and a two-state solution to the Israeli-Palestinian conflict.

Friedman expressed regret over inflammatory statements he had made, such as calling left-wing Israel advocacy group J Street “worse than kapos,” telling the Senate Foreign Relations Committee in his opening statement, “I regret the use of such language.”

“Apology is the first step to atonement,” Friedman said. “I have profound differences of opinion with J Street. My regret is that I did not express my views respectfully.”

The controversy over Friedman’s nomination erupted in the hearing room as Friedman began his opening statement, with several hecklers including a man who held up the Palestinian flag and shouted about Palestinian claims to the land of Israel.

“My grandfather was exiled,” the man said before being escorted out of the room. “Palestinians will always be in Palestine!”

Senator Lindsey Graham (R-S.C.) acknowledged that Friedman has said things he did not agree with but said he backed the nominee as qualified, experienced and passionate.

“I believe he is the right guy at the right time. He’ll be Trump’s voice. Trump won the election,” Graham said.

Senator Ben Cardin (D-Md.), the senior Democrat on the committee, said he was concerned about Friedman’s stances.

“Mr. Friedman, I have questions about your preparedness for this important post. I am uncertain of how you will represent all Americans to all Israelis and whether you are committed to a longstanding U.S. policy to a two-state solution,” Cardin said.

During a joint press conference with Israeli Prime Minister Binyamin Netanyahu on Wednesday, Trump said that he could live with either a two-state or a one-state solution, whichever the Israelis and Palestinians could agree upon.

Five former U.S. ambassadors to Israel from both Republican and Democratic administrations urged the Senate in a letter not to confirm Friedman, saying that he holds “extreme, radical positions.”

“We believe him to be unqualified for the position,” wrote the former ambassadors, including Thomas Pickering, Edward Walker, Daniel Kurtzer, James Cunningham and William Harrop.

The former envoys wrote that Friedman has said he does not believe it would be illegal for Israel to annex Yehudah and Shomron and has been active in supporting the Jewish presence there. They said the committee should address the question of whether Friedman, if confirmed, would defend the established U.S. position that annexation without an international resolution would be “counterproductive and a violation of international law.”

“I don’t think anyone would support a state where different classes of citizens had separate rights,” Trump’s nominee stated, according to Haaretz.

The response was consistent with a statement made by Israeli President Reuven Rivlin earlier in the week.

On the subject of the Golan, Friedman said that the “Golan Heights is a strategic area for Israel. It’s not an area of conflict. It [he annexation] worked out quite well.”

On Wednesday, Prime Minister Netanyahu told reporters that he had asked Trump to recognize Israeli sovereignty in the Golan Heights, but did not describe the president’s response.

Friedman will need the votes of at least 11 of the committee’s 21 members in order to gain confirmation, which is considered likely despite the criticisms.