Community “A Day Without Immigrants” in Lakewood
Community 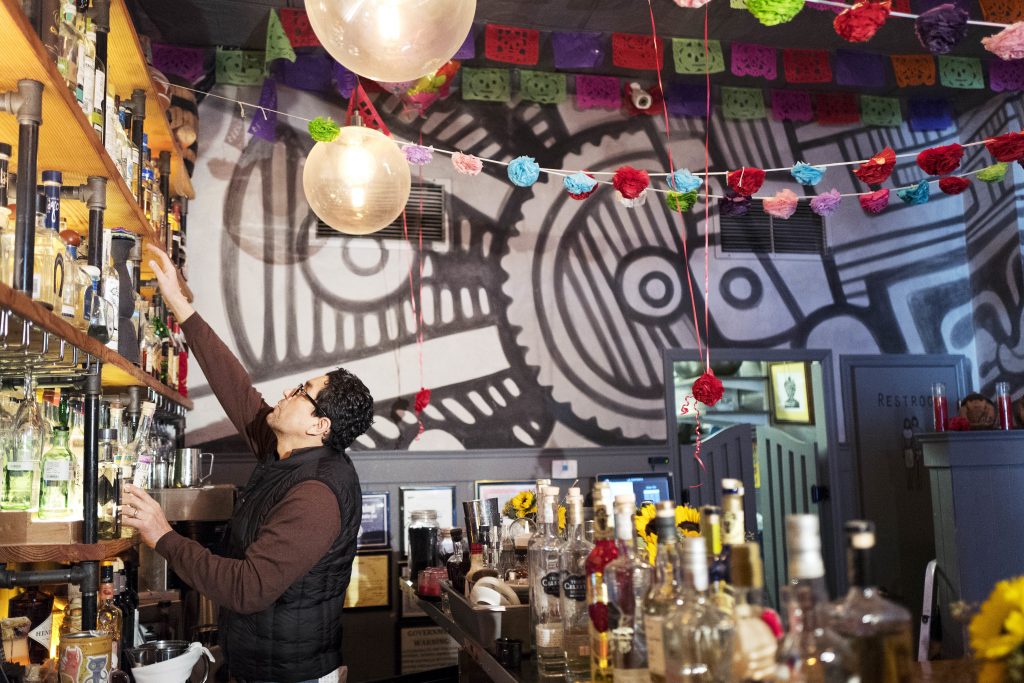 As immigrants across America stayed home from work and rallied in protest of the Trump administration’s crackdown on illegal migration to the United States, Jewish institutions and businesses in Lakewood, nearly all of which employ members of the town’s large Mexican community, found themselves caught in the highly charged political debate. Effects were highly varied, but none escaped without at least a discussion of what workers would do on what organizers billed as a “day without immigrants.”

At Yussi’s deli and take-out on Second Street, a manager said that all of his employees showed up for work in the morning, but asked if they could take off for an hour or two to attend the rally being held nearby. He added that the workers’ absence did cause a certain amount of strain on operations, given that Thursday is a particularly busy day for the popular take-out shop’s pre-Shabbos business, but permission was granted nevertheless.

“They asked very nicely and we said they could go. I respect what they’re doing, they’re not being violent or anything, they’re just worried,” he said.

At the Heimish Bakery, which also operates a café, next door on Second Street, a lone Jewish employee was too overwhelmed to speak to Hamodia, a sign of the protest’s effects. She told a disappointed customer that she could not give him the fried onions he had asked for with his order as none of the kitchen staff were present.

Shraga Weber, who operates a carpet cleaning business, said that all five of his crew told him that morning they were not coming to work for the day.

“There wasn’t much I could do about it; we’ll have to catch up tomorrow,” he said. “I think this will blow over, but if they really start not letting in immigrants it will be a problem for us 10 years down the road, because that’s how we get workers. I had my business before the Mexicans came to Lakewood, and I couldn’t get anyone steady. They’ve been very good and dependable.”

At NPGS, one of Lakewood’s largest supermarkets, the full staff was on hand and working on the busy shopping day, but not from lack of effort, by the staff manager, Ahmed.

“I spoke to them all yesterday and said, ‘Tomorrow is Thursday and we all need to be here,’” he said. “We have a wonderful team, we treat them with respect and they’re very loyal. When I need them here at two in the morning, they’re here then also.”

At Corner of Second, a small grocery, Chaim Kramer, who was behind the register, said that all of his store’s employees were present.

“They understand that if they don’t show up, they won’t get paid, so they’re all here,” he said.

David Mizrachi of Eat a Pita said that he discussed the issue with his workers on Wednesday and that his staff was very amenable to coming in.

Lakewood’s large Hispanic community held a rally in the town square on Clifton Avenue. Speakers addressed the crowd of several hundred participants in Spanish. Protesters waved flags and paraphernalia from Mexico as well as Colombia and other South and Central American countries.

One protester said that his boss was understanding of his decision to take off from his job in construction for the day. He said he was participating because “they want to deport millions of my friends.”

Oded Ramos, who also works in construction, said that his manager had not been as understanding.

The event lasted for several hours, but the crowd dwindled as afternoon approached.

Among the hardest hit, was Lakewood’s flagship, Bais Medrash Govoha, which employs a huge staff of almost entirely Mexican immigrants. Rabbi Moshe Gleiberman, vice president of administration, said that more than half of the staff did not report for work Thursday morning. Despite the large-scale absence, he said that the yeshivah continued to function as usual.

“Baruch Hashem, the ship is running smoothly,” he said. “We have a good staff and at times like this everybody pitches in a little extra.”

A representative of Ichud Hamosdos, an organization of Lakewood’s chinuch institutions, said that, while some schools had been affected, most staffs were at or close to full attendance.

The administrator of one cheder who asked not to be named said that six out of seven of his employees were on hand. “I spoke to them yesterday and said that we won’t pay for the day, but that I respect their decision, whatever it is,” he said.

Rabbi Asher Lederer of Yeshivah Ketanah said that employees expressed an interest in participating in the protest, but were dissuaded.

“We said, ‘The kids have to eat, let’s give lunch and then you can go and we’ll clean up early tomorrow.’ My manager spoke to them and said, ‘Look, the boss is a good boss,’ and they decided to come and stay the whole day,” he said. “We treat them with respect. We’ve loaned them money and paid for legal help; if you do for them, they do for you.”