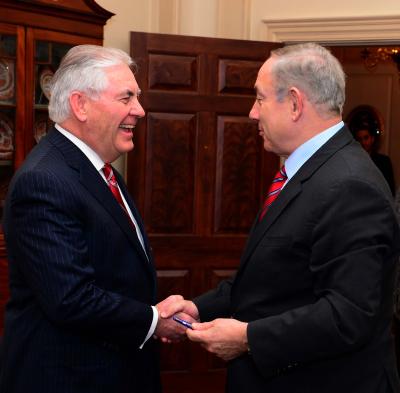 As the meeting took place, a “high-ranking White House source” told Israeli media that President Trump’s administration does not plan to push Israel on establishing a Palestinian state. President Trump is very interested in getting Israel and the Palestinians to negotiate, and would like to solve the conflict if possible, but “it depends on what the parties want, whether that comes in the form of two states for two people, or in some other manner.”

The comments confirmed a report on Channel Ten that quoted sources in the White House as saying that the two-state solution will not be on the meeting’s agenda – and will merit a mention in passing, if at all. Likely at the top of PM Netanyahu’s agenda will be what to do about Iran, government sources said. Weekend reports said that Netanyahu had several ideas he planned to share with Trump, given the president’s apparent willingness to confront Tehran on its violations of the nuclear treaty signed with the Obama administration, the report said.

On Tuesday, Israel’s ambassador to the United Nations, Danny Danon, attempted to lower the expectations on Israel’s right for positive results emerging from the meeting. Speaking on Army Radio Tuesday, Danon said that “the first meeting between the new president and the prime minister is an important one, of course. But I have been hearing from many people that January 20, the day President Trump took office, or February 16, the day of the meeting, represents the ‘beginning of a new era.’ I am not sure this is the case, and I would suggest to everyone that they put these things into the proper perspective, lest they be disappointed later.”