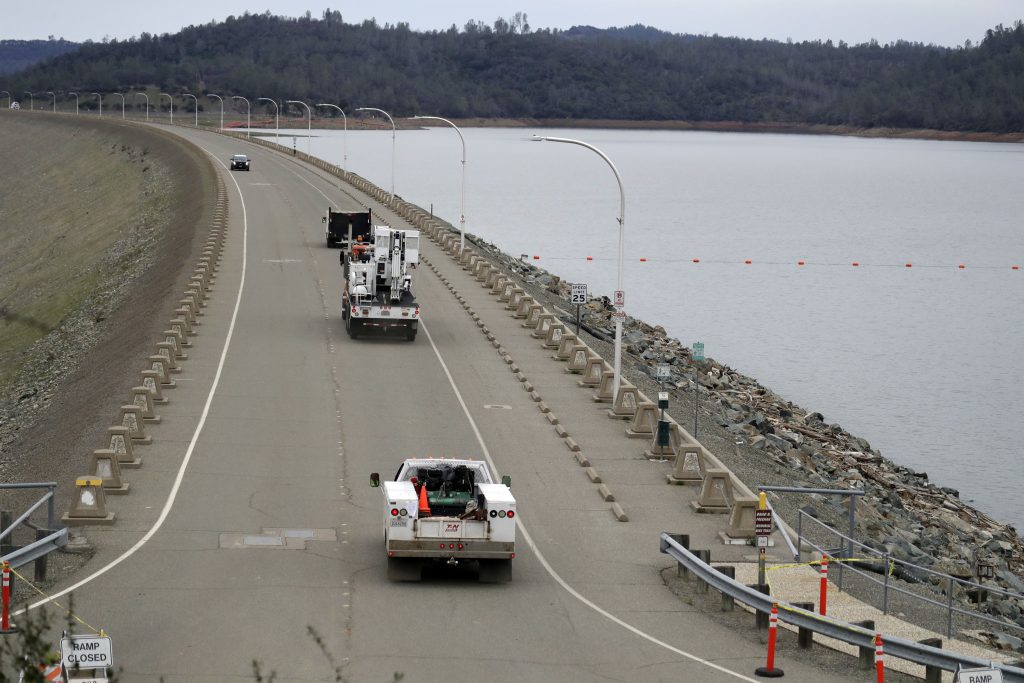 Officials raced to drain more water from a lake behind battered Oroville Dam as new storms began rolling into Northern California on Wednesday and tested the quick repairs made to damaged spillways that raised flood fears.

The three storms were expected to stretch into next week. Forecasters said the first two storms could drop a total of 5 inches of rain.

However, the third storm, starting as early as Monday, could be more powerful.

Nonetheless, California Department of Water Resources chief Bill Croyle said water was draining from the reservoir at about four times the rate that it was flowing in, and the repairs should hold at the nation’s tallest dam.

He said work crews had made “great progress” cementing thousands of tons of rocks into holes in the spillways.

“We shouldn’t see a bump in the reservoir” from the upcoming storms, Croyle said.

The reservoir has dropped 20 feet since it reached capacity Sunday. Croyle said officials hope it falls 50 feet by this Sunday.

Still, officials warned residents who have returned to their homes that the area downstream of the dam remained under an evacuation warning and they should be prepared to leave if the risk increases.

Some 200,000 people were allowed to return home Tuesday after being ordered to evacuate Sunday.

Dump trucks and helicopters dropped thousands of tons of rocks and sandbags to shore up the spillways over the weekend and avoid what could be a catastrophic failure and flood.

The swollen lake reached its capacity over the weekend and spilled down an unpaved emergency spillway for nearly 40 hours, leaving it badly eroded. The problem occurred six days after engineers discovered a growing hole in the dam’s main concrete spillway.

Croyle said teams were working on plans for permanent repairs to the dam’s main spillway that could cost as much as $200 million.