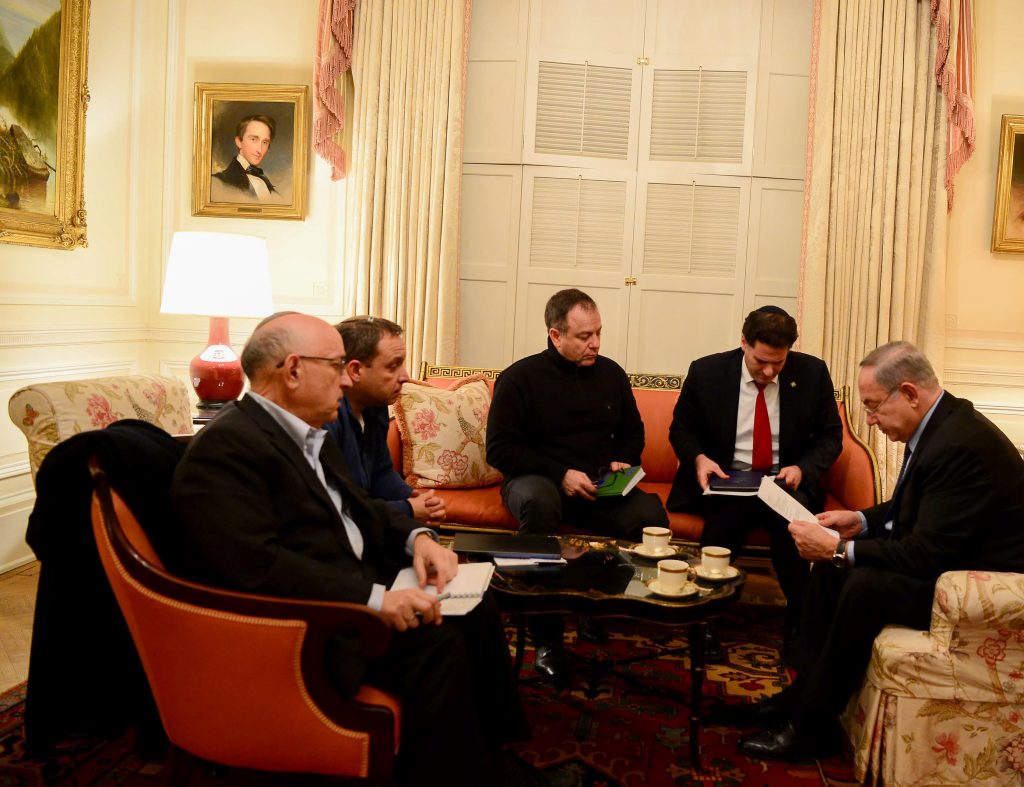 Prime Minister Binyamin Netanyahu, preparing for his first meeting with President Donald Trump at the White House, will work with advisers on Tuesday to align Israeli and U.S. thinking on the Middle East and ensure “no gaps” remain.

Staff have cleared most of Tuesday for discussions with Israel’s ambassador to the United States, Ron Dermer, and other senior advisers ahead of Wednesday’s Oval Office meeting. The only event of the day is an evening meeting with Secretary of State Rex Tillerson.

“There isn’t going to be any daylight, no gaps,” one adviser said as the prime minister left for Washington, the first time PM Netanyahu has overlapped with a Republican in the White House in four terms in office.

Those reassurances came as PM Netanyahu took a cautious line on whether he would support a two-state solution to the Israeli-Palestinian conflict, the bedrock of U.S. diplomacy for two decades, when he sits down with President Trump.

During the presidential campaign, President Trump was often unabashedly pro-Israel, promising to move the U.S. embassy from Tel Aviv to Yerushalayim, backing David Friedman, a supporter of Jewish communities in Yehudah and Shomron, as his envoy to Israel, and saying that he wouldn’t apply pressure for talks with the Palestinians.

But in the three and a half weeks since taking office, positions have shifted. The embassy transfer has been put on hold as the fallout from such a move, not least the potential for unrest across the Middle East, has been explained, including by Jordan’s King Abdullah during an impromptu visit.

When it comes to Jewish communities in Yehudah and Shomron, President Trump has laid out a more nuanced position, saying that while he does not see them as an obstacle to peace, building new ones or expanding existing ones beyond their current boundaries is “not good.”

And rather than no pressure for peace talks, President Trump has said he wants to have a go at the “ultimate deal.”

For PM Netanyahu, under investigation at home in two criminal cases involving allegations of abuse of office, ensuring he and President Trump are in lockstep is critical to putting the friction of the Obama administration behind him and laying the ground for a more fruitful relationship with the United States.

At a time when the Middle East is in turmoil and Palestinian politics is fractured by long-standing divisions between the Western-backed Fatah party and the Islamist group Hamas, Israeli officials argue that the time is not ripe for peace.

PM Netanyahu’s task during the scheduled two-hour meeting with President Trump will be to find common ground on both the Yehuda and Shomron issue and the prospects for a two-state solution to the conflict: Israel and a Palestine side by side and at peace.

The prime minister committed to the two-state goal in 2009 and has reiterated the position since. But on Monday, a senior minister in his cabinet said no ministers, foremost Netanyahu, truly believed in the emergence of a Palestinian state.

Officials with PM Netanyahu declined to comment on the remark. But PM Netanyahu has spoken of a “state minus,” something short of full sovereignty for the Palestinians. It was unclear if the contours of that idea would be discussed with President Trump.

As well as Palestinian issues, the two leaders will discuss regional stability and the threat from Iran, with both intent on re-examining and strengthening the nuclear deal with Tehran.

“The alliance between Israel and America has always been extremely strong and it’s about to get even stronger,” PM Netanyahu said as he prepared to leave Israel on Monday.

“Donald Trump and I see eye-to-eye on the dangers emanating from the region but also on the opportunities. We’ll talk about both as well as upgrading the relations between Israel and the United States in many, many fields.”