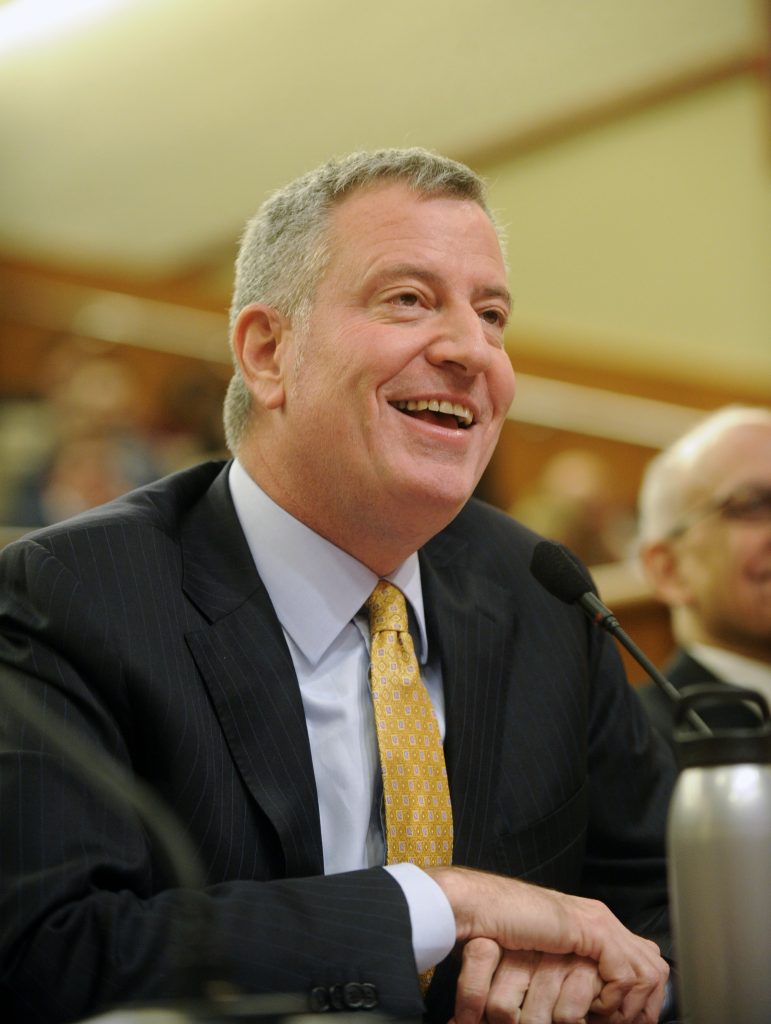 With less than two weeks before the Democratic party chooses a new chairman, Mayor Bill de Blasio endorsed on Sunday a congressman who has been criticized by virtually all Jewish groups for being anti-Israel.

His reputation notwithstanding, Minnesota Rep. Keith Ellison has garnered significant backing in his bid to lead the Democratic National Committee. A vote will take place next weekend, and there are two broad camps supporting their candidates. The progressive Bernie Sanders wing of the party is backing Mr. Ellison, the first Muslim elected to Congress, while the Obama faction has thrown their support to former Labor Secretary Tom Perez.

Mr. Ellison, a former spokesman for Nation of Islam leader Louis Farrakhan, attended what was billed as a “Jewish Rally for Refugees” organized by HIAS, a global Jewish nonprofit that protects refugees. He was introduced by the mayor, who promoted the congressman as one who has struggled against anti-Semitism.

The remarks have rankled Jewish New Yorkers, although Mr. de Blasio formally endorsed Mr. Ellison in December. The Democratic mayor has pronounced himself Israel’s voice among progressives, promising repeatedly to stand with the Jewish state when it is under attack.

In his remarks, Mr. Ellison criticized the Trump administration for omitting any mention of Jews in a statement last month commemorating International Holocaust Remembrance Day.

“They don’t even want to put Jews in the statement,” he said. “How are we going to exclude Jewish people from Holocaust Memorial Day and then defend it by saying, ‘Well, you know, other people suffered too’? That was their answer. The reality is, we know who the primary target and victim of the Holocaust was and we will never forget it. We will stand with you every single day to remind them of it, and we will understand that an attack on one is an attack on all.”

These remarks stand in contrast to his past and record. Several national Jewish groups, including the Andi-Defamation League, have panned his public statements made over the years regarding Israel.

A 2010 fundraiser for his reelection was hosted by Esam Omeish, a past president of the Muslim American Society who was forced to resign from a Virginia state immigration panel in 2007 after he praised Palestinians for choosing “the jihad way … to liberate your land.”

Mr. Ellison has regularly been a vote against Israel’s interests in Congress, even on issues that engender overwhelming majorities. Earlier this year, he was one of a handful of lawmakers voting against a condemnation of the U.N vote targeting Israel..

Senate Democratic leader Charles Schumer has endorsed Mr. Ellison’s bid, in what is widely seen as an attempt to gain the confidence of the progressive wing of the party.

Assemblyman Dov Hikind, a Democrat, started a petition Monday night calling on Sen. Schumer to withdraw his backing of the controversial lawmaker. As of Tuesday evening, the site was nearing 500 signatures.

“Senator Schumer,” the petition reads, “pull the plug on your support for Ellison. He will be a disaster for the Democratic party.”

An email to Sen. Schumer’s office was not returned as this goes to print.