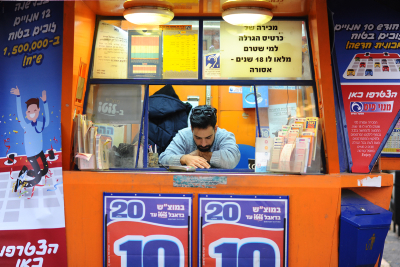 The voice that gave a human dimension to the state lottery, and possibly helped advance sales of subscriptions to the national draw, will no longer be heard. “Arela,” whose job is to call up Israelis who won substantial prizes in the lottery, will continue to work at her profession, but the conversations that helped make her household name will no longer be a part of the lottery’s advertisements.

Five years ago, the lottery’s advertising agency got the idea to broadcast real conversations between Arela – who, it turns out, is a real person, Arela Eidinger – and lottery winners. In the radio ads, Arela is heard informing a new winner of their prize, usually to their shock and disbelief. After convincing them that she isn’t trying to sell them something, they realize that she has called to give them good news – and usually respond with cries of joy and happiness.

The campaign, which has gone on for five years, is one of the longest-running themed radio campaigns, and according to lottery officials helped enhance the game’s reputation, putting a middle-class human face on what had been considered a less than savory endeavor, usually considered restricted to “less desirable” elements.

That is one of the reasons the campaign has been canceled, according to Channel Ten. Finance Minister Moshe Kachlon has for some time waged a campaign against gambling, calling even legalized forms of gambling – like the state lottery – a “black hole in which the fortunes of many of the less fortunate disappear. It hurts to see how many families have lost their savings, their assets, homes, and even families because of gambling,” MK Kachlon said after a recent decision to outlaw state lottery slot machines, which were recently banned by the minister.

According to Channel Ten, the halting of the Arela campaign is part of an effort by the Ministry to lower the profile and popularity of the lottery. The Ministry has cut the advertising budget for the lottery, and as a result the spots will no longer be broadcast. Commenting on the development, the lottery said that “Arela is a dedicated worker and she will continue in her job, including informing winners of their prizes,” although the conversations will no longer be broadcast, as they have in the past.