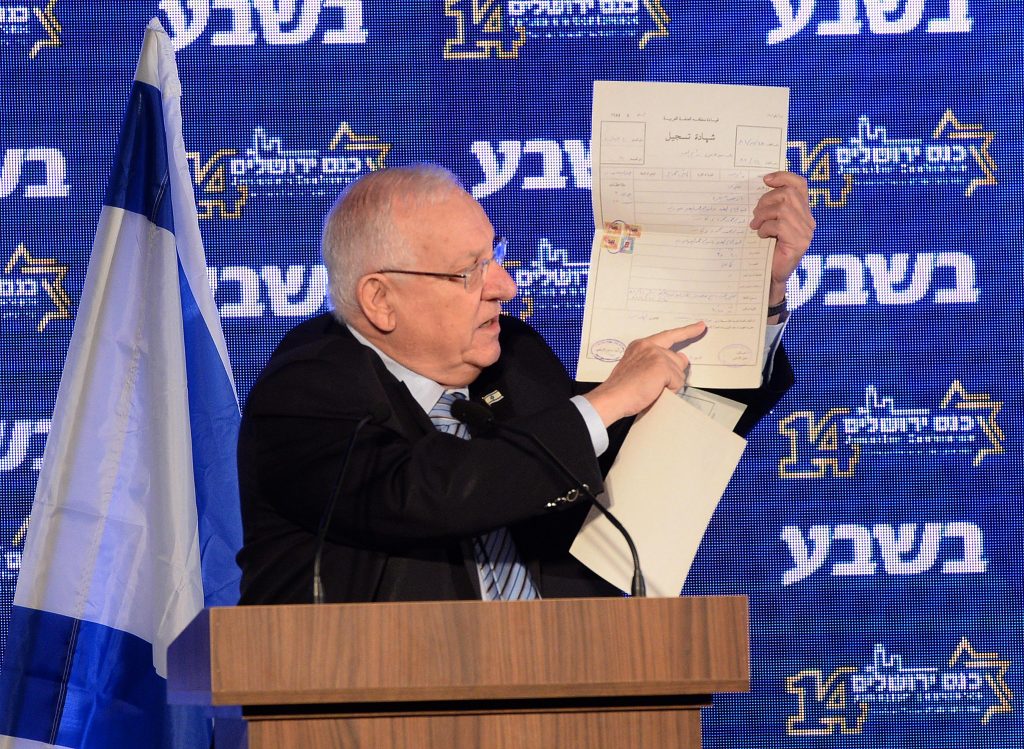 Israeli President Reuven Rivlin took a stand Monday on the future of Yehudah and Shomron, declaring his support for annexation of the entire region, with provision for full Israeli citizenship and equal rights to Palestinian residents.

It was unclear whether Rivlin’s proposal was a signal that Israeli Prime Minister Binyamin Netanyahu might depart from his long-standing official support for the two-state solution, or whether, on the contrary, he was adding his voice to those who are pressuring him not to say anything that would make it easier for Trump to oppose annexation.

On the eve of his historic meeting with U.S. President Donald Trump on Wednesday, Netanyahu responded to urgings from members of his coalition this week not to give the two-state solution his endorsement while in Washington, with an ambiguous pledge to advance “responsible policies.” Outside his right-wing coalition partners, annexation is not regarded as “responsible” policy.

Yet, Rivlin told the 14th Annual Yerushalayim Conference on Monday that he believes “Tzion is entirely ours,” and that “the sovereignty of the state of Israel must be in all the blocs.”

“It must be clear,” he said to the packed auditorium, that “if we extend sovereignty, the law must apply equally to all. Applying sovereignty to an area gives citizenship to all those living there.
“There are no separate laws for Israelis and for non-Israelis,” he added.
The president condemned the recently passed Regulation Law, which retroactively legalizes 3,000 Jewish homes built on disputed land. On Sunday, Haaretz reported that Rivlin rejected the law as fit only for an “apartheid state.”

Thus, his stipulation that annexation of Yehudah and Shomron must be contingent on guaranteeing equal rights to the Palestinians living there.

During his speech, Rivlin showed the approving crowd the original Arabic-language document attesting to his ownership of a parcel of land located over the Green Line.

Rivlin won an 11-year legal battle with a Palestinian claimant over title to the land about 40 years ago. A Ramallah court ruled that he was the rightful owner, and the land was subsequently entered in the Palestinian registry.

“This Ashkenazi is registered in Ramallah,” he said.