Nearly 200,000 Evacuees May Not Go Home Until Dam Is Repaired

Nearly 200,000 people who were ordered to leave their homes out of fear that a spillway could collapse may not be able to return until the barrier at the nation’s tallest dam is repaired, a sheriff said Monday.

The sheriff of California’s Butte County, Kory Honea, did not say how long the fixes could take and offered no timetable for lifting the evacuation order. Officials from the state Department of Water Resources were considering using helicopters to drop loads of rock on the eroded spillway at Lake Oroville, about 150 miles northeast of San Francisco.

Meanwhile, the water level behind the dam dropped, easing slightly the fears of a catastrophic spillway collapse. But with more rain expected later in the week, time was running short to fix the damage ahead of the storms.

A day earlier, authorities ordered mass evacuations for everyone living below the lake out of concern that the spillway could fail and send a 30-foot wall of water roaring downstream.

Nancy Borsdorf described a scene of chaos on her way out, including drivers abandoning cars as they ran out of gas.

“People were just panicking,” said Borsdorf, who was at a shelter Monday in Chico.

Asked if the spillway was supposed to handle far more water, the acting head of California’s water agency said he was “not sure anything went wrong” on the damaged spillway. 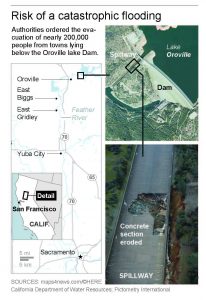 Bill Croyle said sometimes low-flow water can be high energy and cause more damage than expected. His comments came after officials assured residents for days that the damage was nothing to be concerned, then ordered everyone to get out in an hour.

The water level in the lake rose significantly in recent weeks after storms dumped rain and snow across California, particularly in northern parts of the state. The high water forced the use of the dam’s emergency spillway, or overflow, for the first time in the dam’s nearly 50-year history on Saturday.

The threat appeared to ease somewhat Monday as the water level fell. Officials said water was flowing out of the lake at nearly twice the rate as water flowing into it.

Documents show environmentalists raised concerns years ago about the stability of the emergency spillway, but state officials dismissed them and insisted the structure was safe.

Croyle said Monday that he was not familiar with the 2005 warnings.

Sunday afternoon’s evacuation order came after engineers spotted a hole in the earthen secondary spillway for the 770-foot-tall Oroville Dam and told authorities that it could fail within the hour.

With more rain expected Wednesday and Thursday, officials were rushing to try to fix the damage and hoping to reduce the dam’s water level by 50 feet ahead of the storms.

The sudden evacuation panicked residents, who scrambled to get their belongings into cars and then grew angry as they sat in bumper-to-bumper traffic hours after the order was given.

A Red Cross spokeswoman said more than 500 people showed up at an evacuation center in Chico, California.

In all, about 188,000 residents of Yuba, Sutter and Butte counties were ordered to evacuate.

This article appeared in print on page 2 of the February 14th, 2017 edition of Hamodia.