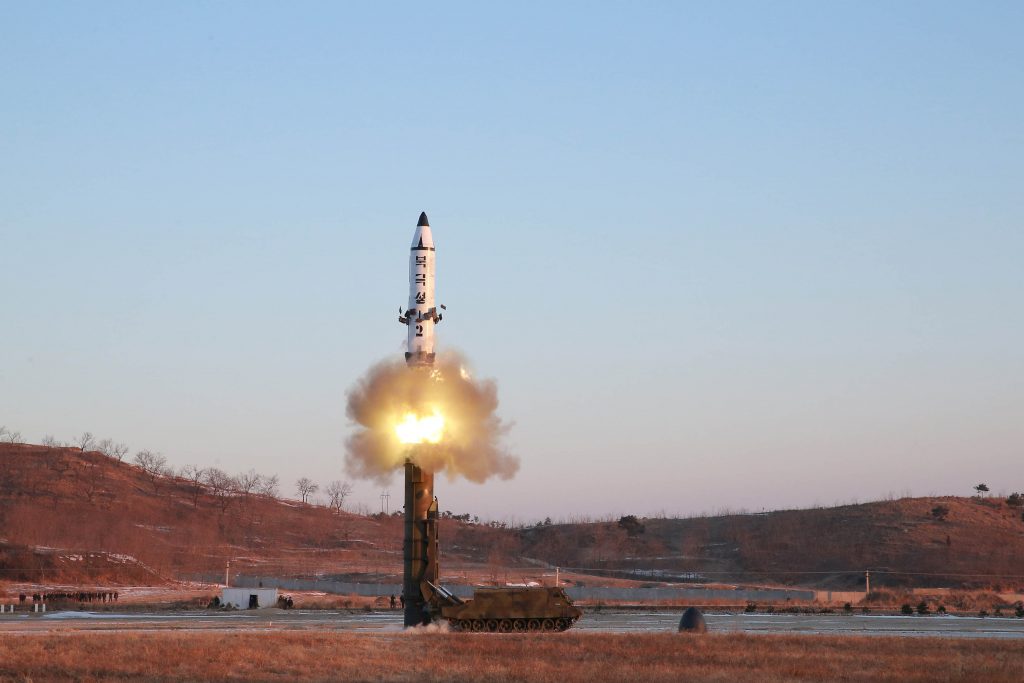 North Korea said on Monday it had successfully test-fired a new type of medium- to long-range ballistic missile a day earlier, claiming further advancement in a weapons program it is pursuing in violation of United Nations resolutions.

North Korea fired the ballistic missile on a high arc into the sea early on Sunday, the first test of President Donald Trump’s vow to get tough on an isolated regime that tested nuclear devices and ballistic missiles last year at an unprecedented rate.

The United States, Japan and South Korea requested urgent U.N. Security Council consultations on the test, with a meeting expected on Monday afternoon, an official in the U.S. Mission to the United Nations said.

Japan said on Monday further sanctions against Pyongyang could be discussed at the United Nations, and called on China to take a “constructive” role in responding to the latest launch.

China is North Korea’s main ally and trading partner but is irritated by Pyongyang’s repeated provocations, although it resists calls from the United States and others that it should be doing more to rein in its neighbor.

“We have asked China via various levels to take constructive actions as a permanent member of the U.N. Security Council and we will continue to work on it. At the same time, Japan will continue to urge North Korea to exercise self-restraint from provocative actions and comply with U.N. resolutions,” Japan’s Chief Cabinet Secretary Yoshihide Suga said on Monday.

China had yet to comment publicly on the launch on Monday.

North Korea has conducted five nuclear tests, including two last year, although its claims to be able to miniaturize a nuclear weapon to be mounted on a missile have never been verified independently.

KCNA said the missile was fired at a high angle in consideration of the safety of neighboring countries. A South Korean military source said on Sunday the missile reached an altitude of 340 miles.

It flew about 315 miles toward Japan, landing off the east coast of the Korean peninsula.

The missile was propelled by a solid fuel engine and was an upgraded, extended-range version of its submarine-launched ballistic missile that was tested successfully last August, according to KCNA.

South Korea’s military said on Monday the missile had been launched using a “cold-eject” system, whereby it is initially lifted by compressed gas before flying under the power of its rocket, a system used for submarine-launched missiles.

“This new rocket is the type that we should be much more worried about. Solid-fuel rockets can be launched at short notice without much preparation,” he said in an email.

“Large solid-fuel motors are difficult to make work correctly so this is indeed a significant advance by North Korea,” McDowell said.

In addition to launching more quickly, solid-fuel engines also boost the power and range of ballistic rockets. The test also verified a “feature of evading interception” and “the mobility and operation of the new type missile launching truck,” KCNA reported.

The North’s Rodong Sinmun newspaper showed pictures of a missile fired from a mobile launch vehicle resembling a tank, with a flame appearing only after it had risen clear of the vehicle.

Before Sunday, the North’s two most recent missile tests had taken place in October. Both were of intermediate-range Musudan missiles and both failed, according to U.S. and South Korean officials.

President Trump and his aides are likely to weigh a series of possible responses, including new U.S. sanctions to tighten financial controls, an increase in naval and air assets in and around the Korean peninsula, and accelerated installation of new missile defense systems in South Korea, the administration official said.

However, the official said that, given that the missile was believed not to have been an ICBM and that Pyongyang had not carried out a new nuclear explosion, any response would seek to avoid ratcheting up tensions.

Kim said in his New Year speech that the North was close to test-launching an ICBM and state media have said such a launch could come at any time. A fully developed ICBM could threaten the continental United States, which is about 5,500 miles from North Korea.

South Korea’s Finance Ministry said it would act “swiftly and firmly” if financial markets reacted to the missile launch.

The South Korean won and shares showed little reaction to the test.