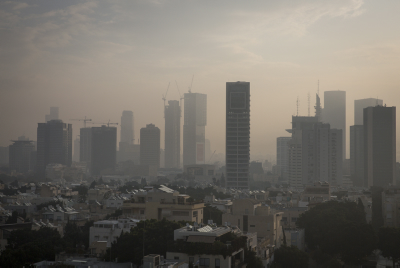 Drivers in the Haifa area awoke Monday to icy roads, as heavy hail that fell early in the morning “stuck” to the ground, making commuting on the main Haifa-Tel Aviv road hazardous. The hail was the first round of a series of winter storms that are set to hit the country this week, with storms later in the week possibly bringing snow to Yerushalayim and other parts of the country.

Monday and Tuesday are expected to be stormy, with heavy rain from the north of the country to the Negev. Rain will continue Monday night, and taper off later Tuesday. On Tuesday night, another winter storm blows in – this one bringing cooler temperatures and heavy moisture. Flooding is possible, and ice is expected to form on roads overnight. Snow will fall in the Hermon, and possibly in the higher elevations of the Galilee.

On Thursday, things take a turn for the colder as yet another winter storm moves in. The higher levels of cold in this storm could bring snow to Yerushalayim, and the hilltops of Yehudah and Shomron, forecasters said. According to forecasters, February in recent years has been the month for snow in the city, and considering that winter is almost over, this week’s storm is probably the last and best chance for a blanket of the white stuff to cover Yerushalayim.

Although December had very high levels of precipitation, November was almost bone-dry, while January had average rainfall, or even below average in some parts of the country. As a result, water experts said, this winter is going down in the record books as average at best, but each day of precipitation helps the situation.