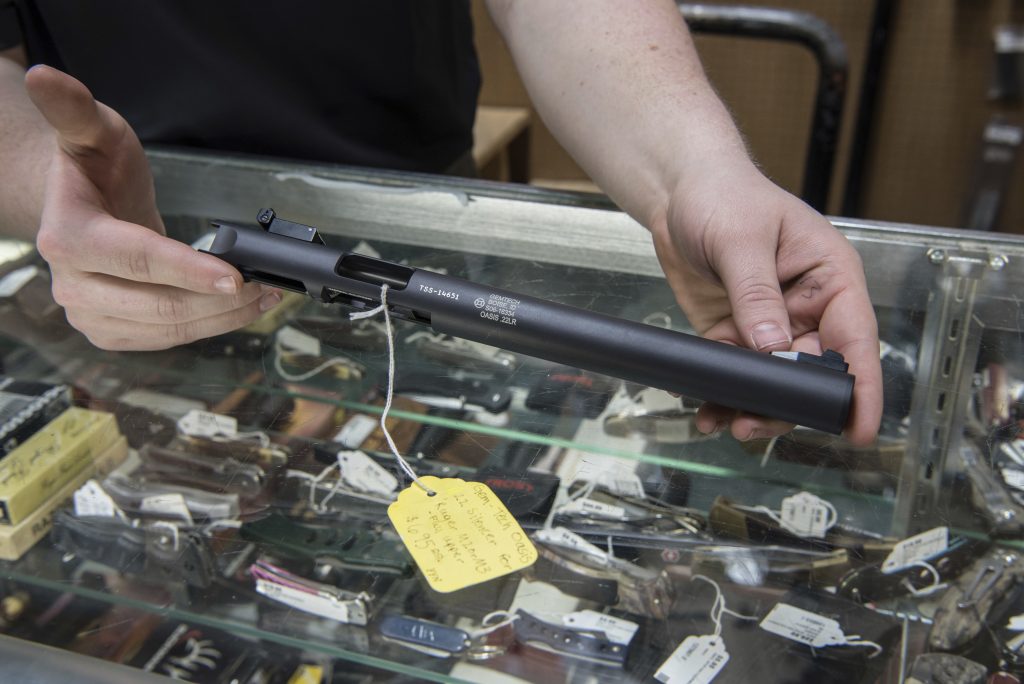 They are the stuff of legend, wielded by hit men. For decades, buying a silencer for a firearm has been as difficult as buying a machine gun, requiring a background check that can take close to a year.

Now, emboldened by the election of Donald Trump as president, the industry has renewed a push in Congress to ease those restrictions, arguing that it’ll help preserve the hearing of gun users.

“We look at this as a Second Amendment issue. We look at it as a health issue,” said Erich Pratt, executive director of Gun Owners of America. “The decibel level of a fired gun, even the lowly .22-caliber, can cause hearing damage.”

Since the 1930s, silencers have been regulated under the National Firearms Act, facing the same paperwork, $200 tax and background checks required to buy a machine gun.

A background check to buy most firearms must be completed within three days, or the sale automatically goes through. But the process for a silencer and weapons regulated under the NFA can take eight months or more. Each silencer carries a serial number that can be tracked. Eight states outlaw the sale or possession of silencers.

Despite the barriers, silencers have gained in popularity. In 2008, when West Valley City, Utah- based SilencerCo was formed, about 18,000 silencers were being sold each year by the entire industry. These days the company, which has 70 percent of the market, sells that many each month.

One of its founders, CEO Josh Waldron, said he suffers hearing loss and still deals with a ringing in his ears from when he went hunting for mule deer as a teen with his father’s .243 rifle.

Mr. Waldron and other advocates say one of the biggest benefits is for hunters who need to be able to hear what’s around them and detect the movements of prey – something made more difficult if they’re wearing ear protection.

“You need your senses when you’re hunting,” Waldron said while attending this year’s gun industry SHOT Show convention in Las Vegas. “What this is doing is taking the hearing protection that one would wear off your head and putting it on your gun.”

Silencers, more technically called suppressors and nicknamed “cans,” were invented in the early 1900s by MIT-educated Hiram Percy Maxim, who also invented a muffler for gasoline engines. They were brought under NFA regulations after Depression-era game wardens were concerned hunters would use them to poach.

Advocates say it’s misleading to call them silencers because they don’t mute the noise a gunshot makes as much as muffle it. They cringe at the images fed by Hollywood that show them as a tool of assassins and others looking to kill people without detection.

“It’s only in the movies where you put on a suppressor – or as they call them……, a silencer – and all you hear is ‘pfff’. That’s not real life,” Pratt said.

U.S. Rep. Jeff Duncan, a Republican from South Carolina, is a sponsor of the “Hearing Protection Act,” the latest attempt to pass such legislation. It’s previously been met with resistance, especially under President Barack Obama and among Democratic lawmakers who view it as a gun-promotion issue.

It doesn’t hurt now that Mr. Trump’s son Donald met with SilencerCo and was videoed trying out their products.

“I’m cautiously optimistic,” Duncan said. “Don Junior, who is an avid hunter himself, has come out in favor of this particular legislation. And so he gets it. That gives us a little bit of juice within the White House and the executive branch. And hopefully we can tap that energy and have it transfer over to the legislative branch.”

Suppressors generally lower the sound level by 20 to 35 decibels, leaving most guns still louder than your average ambulance siren.

Critics say efforts to ease the restrictions will allow more criminals to use them and will make it difficult to detect when and where a shooting is taking place. There aren’t many cases to point to in which a silencer was used during a crime. Gun-control advocates say that shows that tightly regulating them is working, while the gun industry says it’s more an indication that criminals aren’t apt to use them even if restrictions are eased.

Lindsay Nichols, senior attorney with the Law Center to Prevent Gun Violence, scoffs at the idea that making it easier to buy a suppressor is motivated by protecting someone’s hearing.

“They’re not about protecting people’s ears. In fact, a good pair of ear plugs and ear muffs work just as well as a silencer – and they don’t pose a risk that a criminal is going to use them in a violent crime,” she said, adding: “This is clearly something that I think that a lot of people can see through. They can see this is really about profits for the gun industry.”

Ed Turner, a former police officer and the owner of Ed’s Public Safety, a gun shop in Stockbridge, Georgia, said he’s scaled back the number of silencers he carries because of the hassle of buying one.

“To say that it’s going to enhance a criminal element, I think that’s kind of ludicrous,” Mr. Turner said. “Criminals don’t abide by laws anyway… They’re getting them off the street. They’re stolen.”