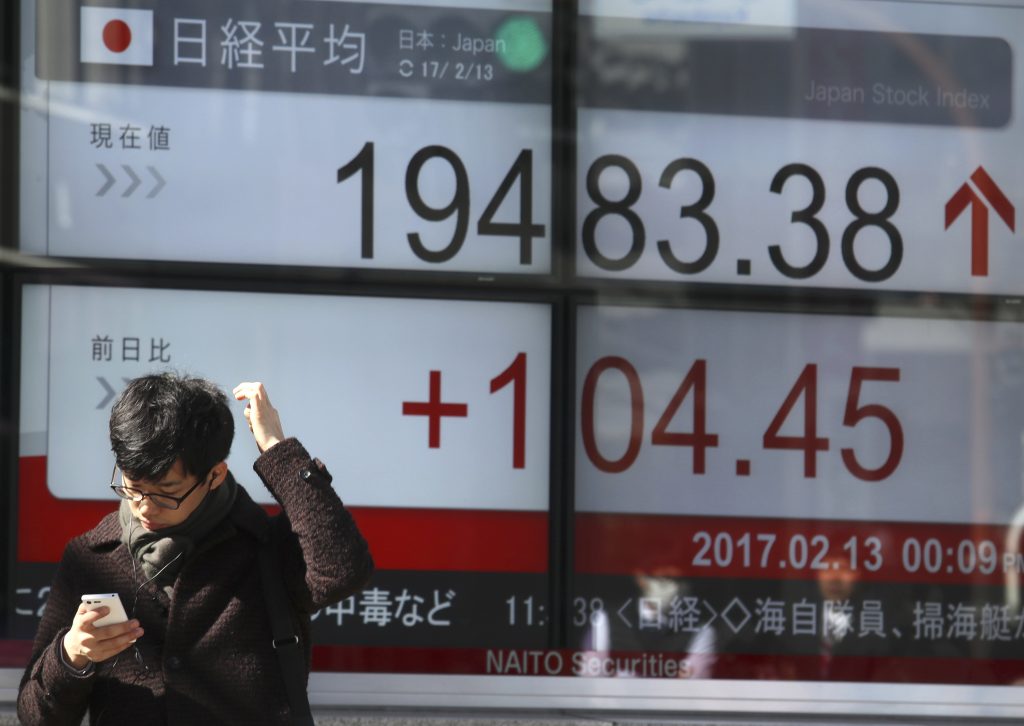 President Donald Trump helped to reassure investors by affirming Washington’s “one-China” policy and appearing to back away from promises to declare that Beijing and Tokyo manipulate their currencies. President Trump said he had a “very warm” phone conversation with his Chinese counterpart, Xi Jinping. The president said Washington would honor its “one-China” policy, which had been in question after he spoke to the leader of Taiwan after his election.

President Trump met with Japanese Prime Minister Shinzo Abe in what appeared to be a cordial set of gatherings including golf at the president’s Mar-A-Lago estate. The two leaders announced discussion of a possible bilateral trade deal, and there was no public sparring over past accusations of currency manipulation or other issues.

“This positive lead from the U.S. coupled with improving trade sentiment provides the backing for a positive Monday for Asian markets,” Jingyi Pan of IG said in a report. The meeting between the leaders and President Trump’s “One-China” commitment “could allay some of the trade concerns in Asia and set free into the market more bullish bets,” said Pan. “While it remains to be hashed out, President Trump’s mention of a ‘level playing field’ on currency valuation also appears to reflect an amicable turn after the U.S. president accused his visitors of currency manipulation.”

Chinese exports did better than expected in January, prompting suggestions that the downturn in global demand might finally have bottomed out. Exports rebounded from the previous month’s contraction and rising 7.9 percent over a year earlier. Import growth accelerated from the previous month, rising 16.7 percent over a year earlier in a sign of relatively strong Chinese domestic demand. That was a positive sign for communist leaders who are trying to prevent politically dangerous job losses in export industries that employ millions of workers.

Investors are awaiting a speech Thursday by Fed Chairwoman Janet Yellen for possible signs of how policy might change during the Trump administration. Vice Chair Stanley Fischer said over the weekend that there was “significant uncertainty” about government spending. Another Board member, Daniel Tarullo, announced plans to retire, raising to three the number of empty seats President Trump can fill.

Benchmark U.S. crude fell 9 cents to $53.77 per barrel in electronic trading on the New York Mercantile Exchange. Brent crude, used to price international oils, dropped 6 cents to $56.64 in London after jumping $1.07 the previous session to $56.70.