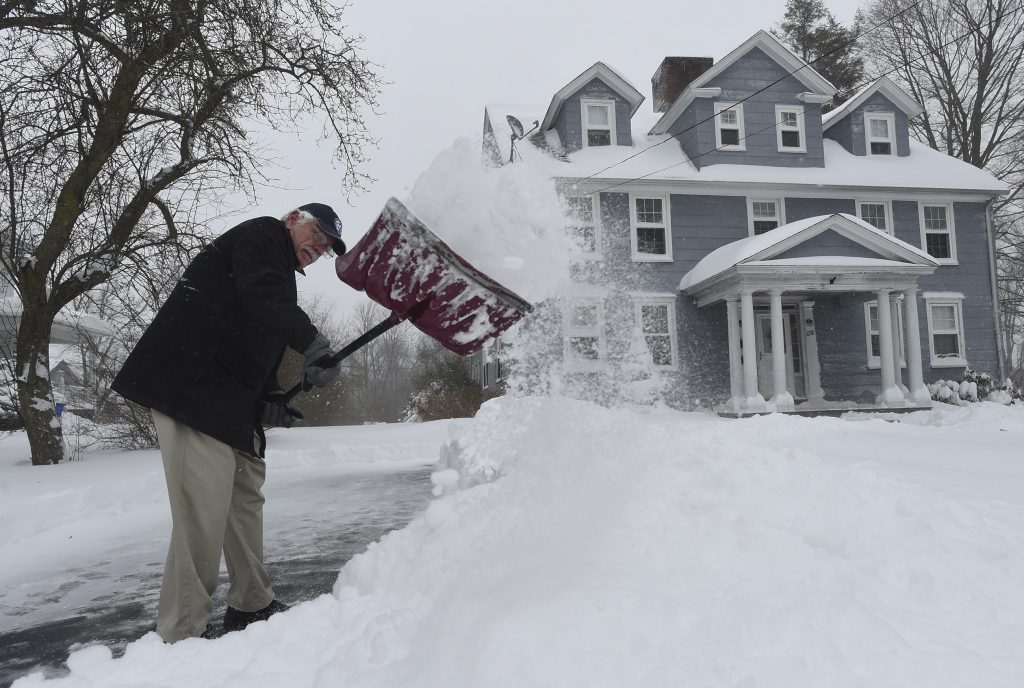 The Northeast U.S. braced Sunday for a winter blast of snow and strong winds that could take the title of biggest storm of the season from one that dumped up to 19 inches of snow just days ago.

Winter storm warnings were in effect from upstate New York to Maine, where blizzard conditions and 2 feet of snow are possible. The National Weather Service says up to 19 inches of snow could fall in Boston through Monday, while Connecticut and Rhode Island could see a mix of snow, sleet and rain of more than 6 inches.

Wind gusts of more than 50 mph, coastal flooding and power outages could hit parts of the region. A blizzard watch was in effect on Cape Cod, with a storm surge of one to three feet possible, according to the weather service.

“It is a dangerous storm because of high winds, low visibility and heavy snow,” said Lenore Correia, a weather service meteorologist in Taunton, Massachusetts. “It’s a big snowstorm, but nothing we haven’t seen before either.”

More than 3,000 flights were canceled nationwide by midmorning Sunday, including 155 at Boston’s Logan International Airport, according to the flight tracking service FlightAware. Parking bans were in effect in many cities and towns. School closings across the region were expected Monday, but few announcements had been made by Sunday morning.

Officials across northern New England stressed caution to thrill-seekers looking to make the most out of the heavy snow, especially after two fatal accidents Saturday at Lake Winnipesaukee in New Hampshire.

“While the heavy snow from our recent winter storm provides for optimum conditions for winter sports like snowmobiling, they also create hazards, and we must be cautious,” New Hampshire Gov. Chris Sununu said.

The storm was welcome news at ski areas, which faced some of the lowest snowfall totals in years last year.

“It’s the complete opposite of last year in terms of snow,” said Rachael Wilkinson, director of marketing at Shawnee Peak in Bridgton, Maine. “It’s night and day and everyone is absolutely thrilled.”

The ski area is expected to get 20 to 26 inches of snow by the end of the day, Monday.

The Bangor Police Department in Maine took to social media on Sunday to offer its own take on official snowstorm advice. The department reminded people to check with their bosses before staying in and taking the day off, and to take off their ski-masks before checking in on elderly neighbors.

Those who do go out should bring a blanket, water, working flashlight, small shovel, charged cellphone, snacks and mittens — not gloves.

“Now get to the grocery store and buy things you will never need. Our economy depends on it,” the department quipped.