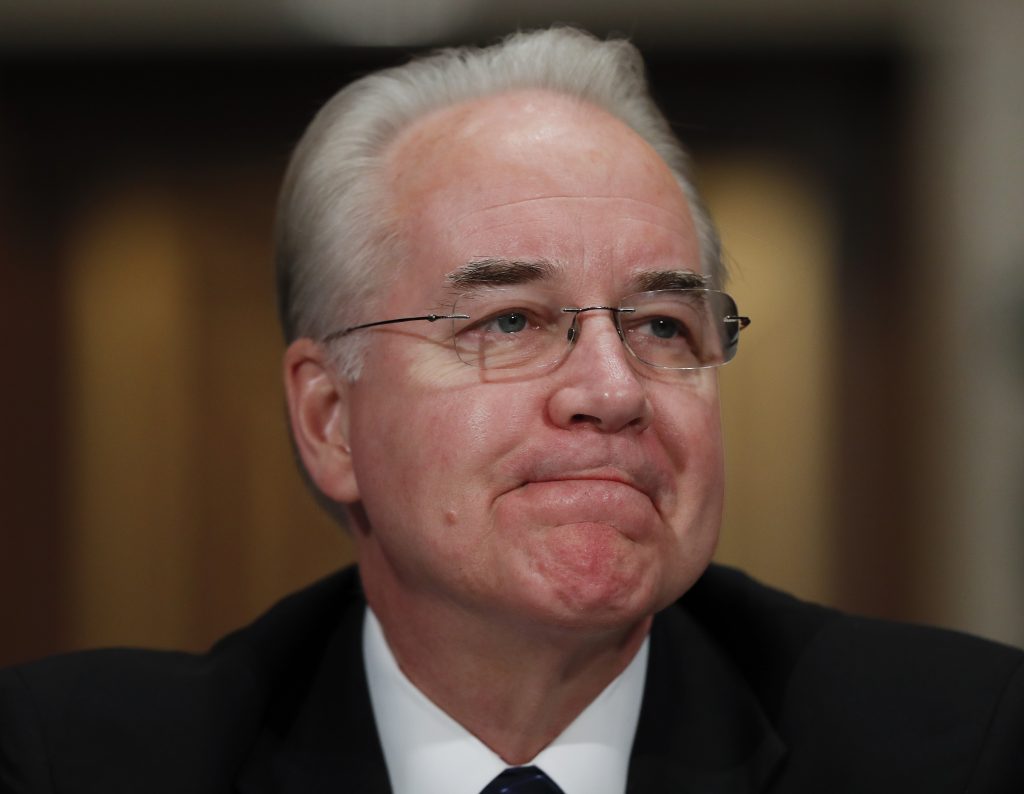 Vice President Mike Pence administered the oath of office to Tom Price, previously a Republican congressman from Georgia, at the White House hours after the Senate confirmed him 52-47 in a party-line vote. That roll call came in the dead of night, thanks to Democrats’ tactic of forcing prolonged debates to broadcast their opposition to Trump and his team.

Pence said that Price, an orthopedic surgeon, is “uniquely qualified” for the job and playing a leading role in helping the Republican-controlled Congress achieve its top priority of repealing and replacing Obamacare.

Pence called Price “the most principled expert on health-care policy” in Congress. Price served seven terms in the House.

As head of the Health and Human Services Department, Price will take center stage as the administration and congressional Republicans try delivering on their pledge to scrap President Barack Obama’s health-care law and substitute their own programs.

Price is likely to play a lead role both in shaping health-care legislation and in issuing department regulations aimed at weakening Obama’s statute.

“Having Dr. Tom Price at the helm of HHS gives us a committed ally in our work to repeal and replace Obamacare,” House Speaker Paul Ryan, R-Wis., said Friday.

Democrats focused on the legislation Price once sponsored, including efforts to kill Obama’s law. He’s also sought to reshape Medicare’s guarantee of health coverage for seniors into a voucher-like program, and cut Medicaid.

Sen. Elizabeth Warren, D-Mass., conceded that Price had experience but added, “It’s the kind of experience that should horrify you.”

That battle won, Republicans were preparing to next win Senate confirmation for financier Steven Mnuchin to be Treasury secretary. He was expected to get the chamber’s approval Monday, along with Trump’s choice to head the Department of Veterans Affairs, physician David Shulkin.

Republicans have lauded Mnuchin’s long career in the finance and banking worlds.

As they did with Price, Democrats are attacking Mnuchin’s background, such as criticizing OneWest bank, which he led, for not protecting thousands of homeowners from unnecessary foreclosures. They also said he failed to disclose nearly $100 million in assets on forms he filed with the Senate.

Price’s nomination is part of a larger clash in which Republicans want to quickly enact priorities long blocked by Obama. Democrats, with few tools as Congress’ minority, are making a show of resistance, stretching some floor debates to the maximum 30 hours Senate rules allow.

Democrats have accused Price of lying about his acquisition of discounted shares of an Australian biotech company and benefiting from insider information. They’ve also said that he pushed legislation to help a medical-implant maker whose stock he’d purchased.

It’s illegal for members of Congress to engage in insider trading. Price has said he’s done nothing wrong.

His close confirmation was the fourth consecutive Senate clash over a Cabinet nominee that closely followed party lines.

Attorney General Jeff Sessions was confirmed 52-47, after Warren was punished for reading a 1986 letter by Coretta Scott King criticizing him. Betsy DeVos became Education secretary by 51-50, thanks to a tie-breaking vote by Vice President Mike Pence.

Those close tallies are a departure from most Cabinet votes, in which the Senate usually grants overwhelming approval in a show of deference to letting presidents choose their teams.

Just four of 31 votes for then-President Barack Obama’s Cabinet vacancies drew at least 40 “no” votes, as did only two of 34 votes for Cabinet positions under President George W. Bush.

During that period, the closest tally for health secretary before Price was the 65-31 roll call for Obama’s 2009 pick, Kathleen Sibelius.