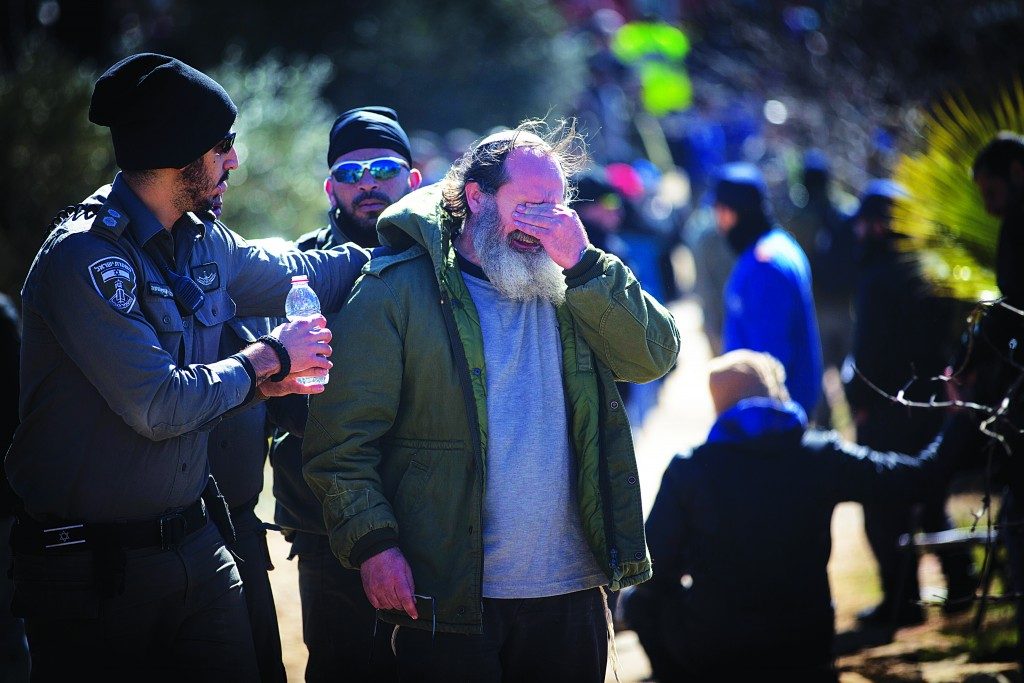 The great irony behind the traumatic evacuation of Amona is that no one gains from it. The 42 families that built a community on an empty hilltop, exposed to the bone-chilling winter winds and the oppressive hamsin heat of July and August, have been evicted, but the alleged Palestinian owners will never take possession of the land. The hill will be returned to its barrenness, never to be rebuilt.

The same scene was played out in Beit El a few years ago, when five apartment buildings belonging to the Ulpana girls’ high school were destroyed. And with Migron, where a thriving community was erased and rebuilt further down the hill.

Homes and dreams were destroyed. Shuls and batei medrash were torn down. And for what?

It didn’t have to be this way. It could have been win-win. The Jewish residents of Amona, Beit El and Migron were ready to pay the alleged owners top dollar. This would have put money in the pockets of the Arabs and allowed the Jews to continue living in their homes. Only one thing prevented this obvious solution: a law on the books of the Palestinian Authority that deems selling land to Jews a crime punishable by death.

(Speaking of great ironies, how strange that the leftist liberals who search high and low for Arab owners of land who have been “wronged” by the Jews, and then convince them to file suit with the Israeli Supreme Court, have no problem with Palestinian Authority laws that deny these same Arabs their fundamental right to profit from land that is registered in their names. But their agenda has nothing to do with justice and morality.)

The government could have taken responsibility for its mistake in sending young, idealistic families to settle Amona on land that, it later turned out, was claimed by Arabs in Jordan or elsewhere. It could have expropriated the land, as governments all over the world do whenever they want to build a highway that runs through someone’s private property.

And if expropriation wasn’t feasible because of the ambiguous legal status of Yehudah and Shomron, then, at the very least, the court should have insisted on verifiable proof of Arab ownership before it issued orders to destroy Jewish homes. Today, a claim of ownership is enough for the court to do so. According to Ariel Kahane, a journalist at Makor Rishon who lived in Amona for five years, the alleged owners of the land on which Migron was built ultimately failed to prove their ownership. That’s little consolation to those whose homes were destroyed.

Every time another Jewish community is uprooted, every time the country is subjected to the trauma of Jewish soldiers facing off against Jewish civilians, the public wants to believe that such scenes are a thing of the past. But they aren’t. Thousands of homes in Yehudah and Shomron are as vulnerable as Amona, the Ulpana and Migron, and likely to face the same fate. Thousands of families live with the fear and anxiety that they’re next.

The Settlement Arrangements Law not only removes the cloud of uncertainty from these families, but it benefits the Arab landowners, who will be able to receive compensation for their land.

Instead of these cases being adjudicated by the High Court — which consistently rules in favor of extreme left organizations and against those representing Jewish values — the new law institutes a special arbitration process that would advocate land swaps awarding Palestinians state land of equal or greater value than that in dispute or 125 percent compensation. The law is designed to prevent the demolition of homes at outposts and settlements that were built in good faith.

To be sure, the law faces an uphill battle at home and abroad. It is certain to be challenged in the Supreme Court and it is equally certain that the court will accept the challenge and rule that the law is illegal.

Abroad, the law will be condemned by the United Nations, Europe and others, even though it benefits the Arabs by allowing them to receive compensation for land that is registered in their names.

There were disagreements even within the coalition over the timing of the law. Should it have waited until after Israeli Prime Minister Binyamin Netanyahu’s February 15 meeting with President Donald Trump in the Oval Office? They have important things to discuss, like Iran, that shouldn’t be overshadowed by a controversial law. And it’s important that Mr. Netanyahu not pull any surprises on the president.

But in the final analysis, the timing isn’t that important. What’s truly important is that people who went to communities in Yehudah and Shomron at the behest of their government be accorded protection by that same government. If the current version of the Settlement Arrangements Law runs into trouble, it can be fine-tuned until it is passed in a way that is acceptable to the court and achieves the same goal.

Amona, and, unfortunately, the owners of nine homes in nearby Ofra that have been slated for demolition, must be the last victims of senseless destruction of Jewish homes in the Jewish state.