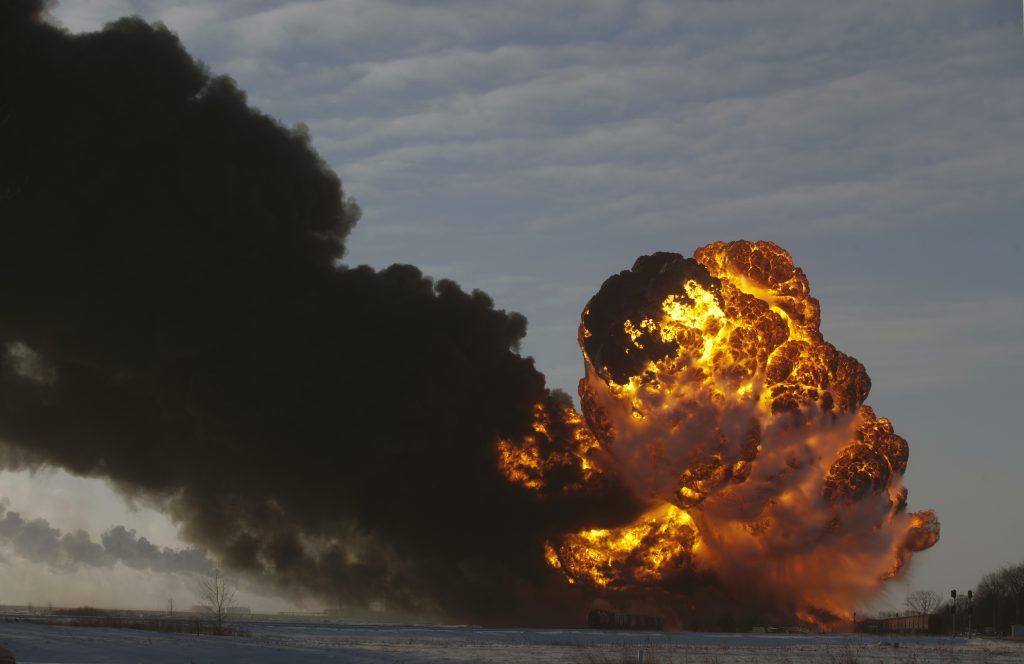 A defective axle broke and caused a 2013 train derailment that led to a series of explosions in North Dakota, the National Transportation Safety Board said Tuesday.

A BNSF train carrying soybeans derailed and was struck by one carrying oil, setting off explosions near the small town of Casselton, about 20 miles west of Fargo. About 1,400 residents were evacuated from their homes. No one was hurt.

NTSB investigators said during a meeting in Washington that the axle on the 45th car of the grain train could have been subjected to more thorough testing when its bearings and wheels were remounted at a BNSF shop in 2010. They said the axle wouldn’t have been returned to service if testing had found the defect, which was created when the axle was made by Standard Steel in 2002.

After the crash, a recall was issued for similar axles that might have also been defective.

BNSF and Standard Steel officials were not immediately available to comment.

The NTSB also cited insufficient safety measures to protect the crew of the oil train, including that there was only one buffer car that separated the oil train’s two head-end locomotives.

The crash came six months after a derailment and fire that killed 47 people in a small Canadian city just across the U.S.-Canada border from Maine. It led BNSF executives to hold a meeting with officials in Fargo about the safety of train travel through that city’s downtown.

The Casselton derailment happened on the afternoon of Dec. 30, 2013. The two men onboard the oil train told officials they lost sight of the tracks in a cloud of blowing snow shortly before seeing a derailed grain car lying across the tracks. Emergency brakes were applied, but the train was travelling at 42 mph when it struck the car.

The NTSB ordered a study of advanced breaking systems after the Casselton accident.

“Such systems would not have prevented the collision, because only a few seconds passed between the time the oil train crew saw the derailed grain car and the moment of collision,” NTSB Chairman Christopher Hart said. “However, advanced brake systems can apply brakes faster, thereby lowering train speed more quickly, shortening stopping distances and reducing the overall severity for many other accident scenarios.”

Eighteen of the oil train’s 104 cars derailed, spilling 400,000 gallons of crude that fueled the fire that could be seen from nearly 10 miles away. It took several weeks to clean up the remaining oil.

The crash damaged the lead locomotive’s front door, forcing the two crew members to exit through the rear of the car.