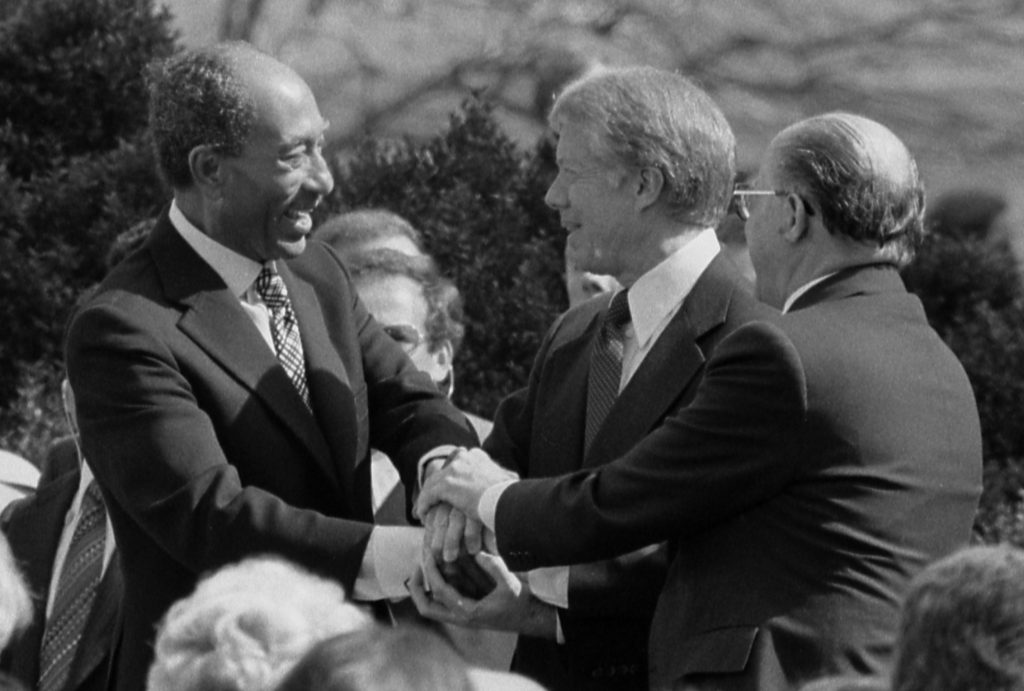 Legislation with sponsors from both parties are proposing to award assassinated Egyptian President Anwar Sadat the nation’s highest honor for his courage in signing a peace agreement with Israel.

The Congressional Gold Medal would be handed over to Sadat’s widow in 2018 to mark both 40 years of the peace accord and the centennial of his birth.

“These two milestone dates,” Ezra Friedlander, the lobbyist behind the effort, told Hamodia, “should serve as a reminder to the world that peace needs the bold and courageous leadership that Sadat had.”

Mr. Friedlander, who heads The Friedlander Group, founded the Anwar Sadat Congressional Gold Medal Commission that is spearheading the advocacy effort to secure the two-thirds support needed in both houses of Congress to secure passage of the legislation.

Egypt led the Arab states in their hatred of the Jewish state from its establishment in 1948, refusing to recognize its existence. In a dramatic turn-around, then-President Sadat visited Yerushalayim in 1977 and declared his desire for peace with Israel, sparking outrage throughout the Arab world.

“Together,” he proclaimed, “we might build a durable peace based on justice, to avoid the shedding of one single drop of blood from an Arab or an Israeli. It is for this reason that I have proclaimed my readiness to go to the farthest corner of the world.”

In a series of meetings arranged by then-President Jimmy Carter and held at Camp David, Sadat and then-Israeli Prime Minister Menachem Begin negotiated the peace treaty that came to be known as the Camp David Accords.

Sadat and Begin received the Nobel Peace Prize in 1978 for their efforts. Sadat was assassinated in 1981 by a member of the Egyptian Islamic Jihad upset at the peace deal.

“Sadat took countless personal risks to achieve a society grounded in peace and diplomacy — an endeavor that ultimately cost him his life,” explained Sen. Hatch. “Thus, awarding Sadat with the Congressional Gold Medal celebrates and gives homage to Sadat’s courageous, remarkable and enduring imprint on history.”

The Congressional Gold Medal was coined in 1776. Its first recipient was Gen. George Washington. Others include the Lubavitcher Rebbe, zt”l, Mr. Raoul Wallenberg, and Mr. Elie Wiesel, z”l.