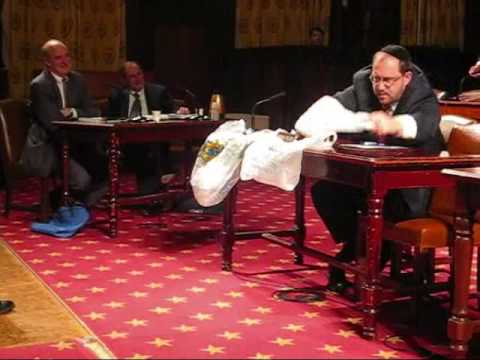 The passage of the bag bill in both chambers of the New York legislature — a rarity granted less than 5 percent of all bills proposed each year — is undeniably a significant political victory to its primary sponsor, Sen. Simcha Felder.

Sen. Felder has been battling the “bag tax” ever since 2008, when the then-city councilman confronted Mayor Michael Bloomberg’s budget chief at a hearing. Taking out of his pocket a prop of three plastic bags, Felder theatrically aired them out and placed them on his desk, questioning if there was a difference in the 5-cent tax charged for a small bag or a much larger one.

Mr. Felder is now in the state Senate, but his flair for visualizing his political positions has not waned.

Withdrawing a bag of bread and a carton of a dozen eggs from under his desk last week, he quizzed a new mayor citing the environment to nickel New Yorkers for a pound of plastic. Is Mayor Bill de Blasio aware of grocery prices today that he was willing to add more expenses to residents, he asked?

“Government’s job is to protect people, not make their lives harder,” Mr. Felder declared. “Our efforts should be geared towards making it easier for New Yorkers to keep more of their hard-earned money, not nickel and diming them every time they turn around.”

The bag fee, or tax, is something which would have been felt in every pocket around the city. There was a rumble of grumbles from Seaside to SoHo, but the general mood was that you can’t fight City Hall. It’s just another tax with the well-meaning goal of changing our habits but whose sponsors had no perception of life on Main Street.

It took a senator who grew up in Boro Park to confront City Hall — and win. Felder quickly won the naming contest, ensuring that when the issue is discussed it will be called a “bag tax,” not fee or fine. He also emphasized that it was not a battle Between a clean environment and dirtying the air just to save a penny.

“Everyone agrees — we all want to protect the environment. Period,” Sen. Felder told the mayor at the Senate hearing last week. “What the mayor isn’t addressing is why the city has to always be punitive. What my colleagues and I object to is the approach. Why can’t it be positive? Why don’t you give a nickel back to New Yorkers for a change?”

Give a nickel back for a change. That, doubtless, would not be called a tax.

Also doubtless — Simcha Felder got behind an issue which resonates among residents and won.