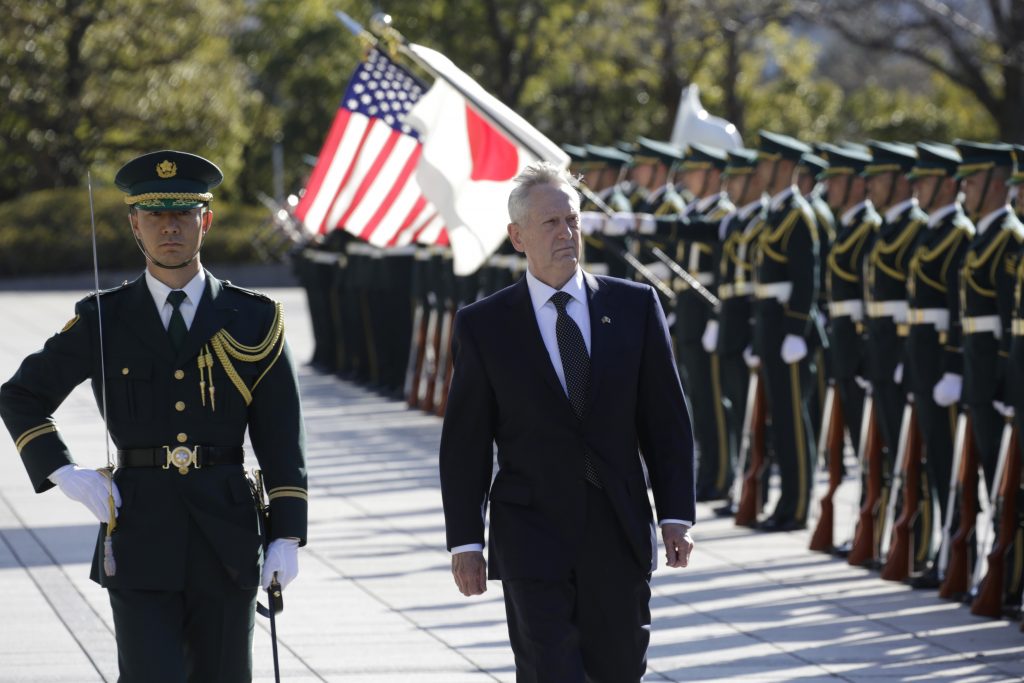 In his debut abroad as the first retired general to lead the Pentagon in more than half a century, Jim Mattis found that in Japan and South Korea his experience in uniform is seen as an asset.

Not everyone who knows Defense Secretary Mattis well in the U.S. shares that view, but he clearly was an instant hit in northeast Asia.

Japanese Prime Minister Shinzo Abe was effusive in his endorsement as the two shook hands Friday before a phalanx of Japanese and international news reporters and cameras.

“I was very encouraged,” PM Abe said, “to see someone like you who has substantial experience, both in the military and in security, defense and diplomacy, taking this office.”

Sec. Mattis won easy confirmation by the Senate just hours after President Donald Trump’s swearing in on Jan. 20. But some had questioned the wisdom of breaking a long American tradition of picking defense secretaries with primarily civilian backgrounds.

In fact, it has been more than a tradition. There is a legal prohibition against appointing a defense secretary who has not been out of uniform for at least seven years. Sec. Mattis retired from a 41-year career in the Marine Corps in 2013. The Congress had to pass a bill making a one-time exception for Sec. Mattis, who was widely praised as a thoughtful, levelheaded leader.

The only other time in history that such an exception was made was for George C. Marshall, the former Army chief of staff who had served as secretary of state before President Harry Truman picked him as defense secretary in September 1950, at a crucial point in the just-started Korean War.

Abe noted that Mattis’s military career included a stint on Okinawa, which the U.S. returned to Japanese control in 1972 based on an agreement signed a year earlier to end the postwar period of U.S. military control.

“So I believe that you are quite familiar with the situation surrounding Japan,” he said.

In Seoul, where civilian control of the military has a mixed history, Mattis’s counterpart, Han Min Koo, portrayed him as a kindred spirit. Han told reporters he knew why they were able to forge a bond in their very first meeting.

“I believe this was possible because we both served as active-duty servicemen for 40-plus years,” Han said.

Sec. Mattis was not shy, either, about highlighting his military background. In Tokyo he recalled training in Okinawa and elsewhere in Japan as a newly minted lieutenant in 1972. He said he made Japanese acquaintances that have lasted a lifetime.

Asia is hardly Mattis’s forte, however. He spent the bulk of his career focused on the Middle East, including combat tours in Iraq and Afghanistan. He also served as NATO supreme allied commander, focused on Europe, from 2007 to 2009.

In picking Mattis, 66, to lead the Pentagon, Trump seemed enamored of the general’s popular nickname, “Mad Dog,” as if this served as a warning to the world not to mess with America.

Mattis, however, insists that the nickname was a media invention that he does not embrace. He certainly came across as anything but “mad” or rabid on his visits to Japan and South Korea. He was a picture of sober restraint at his several public appearances, including a news conference Saturday in Tokyo.

He expressed caution on Iran, saying its adventurism did not mean the U.S. should send more military forces to the Middle East. And he called for diplomacy to address China’s militarization of disputed islands and land formations in the South China Sea.

Even some of his biggest admirers have questioned, however, whether he is the right man for Trump’s Pentagon. One such skeptic is Erin Simpson, a noted defense strategist who wrote about a prospective Secretary Mattis last fall, before he had been selected.

“Not only does the role of secretary of defense not play to Mattis’s strengths,” she wrote, “but success in that role would compromise much of what we admire most in him: his bluntness, clarity and single-minded focus on war fighting. The secretary’s job is by necessity much more political than all that.”