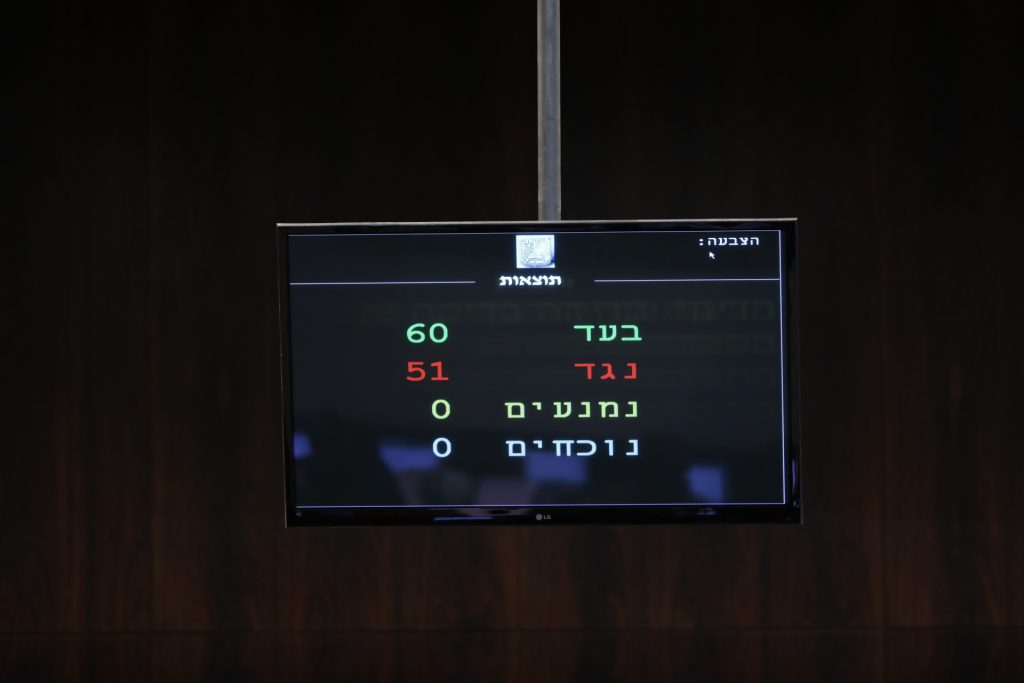 After months of delay, amid international warnings against it and a heated national debate, the Knesset passed the Regulation Law on Monday night by a vote of 60 to 51.

The historic act will give sweeping authorization to some 4,000 homes in outpost communities in Yehudah and Shomron, which were built with Israeli government backing but subsequently faced property claims from Palestinians represented by left-wing Israeli groups.

Under the Regulation Law, homes built on such sites will no longer be threatened with evacuation and demolition. If, subsequently, someone else would prove a claim to the land, he would be given a choice of either accepting an alternate plot of land or monetary compensation for 125 percent of the land’s value.

This marks the first time that the Knesset has sought to impose Israeli law in Area C of Yehudah and Shomron, which is under Israeli military rule. Until now, that region was considered beyond the reach of the Knesset, and Monday’s vote could be viewed as the first phase of extending Israeli sovereignty to the region.

Jewish Home leader Naftali Bennett, who had pushed hard for the bill’s passage, was jubilant.

“Our determination paid off,” he proclaimed, as he thanked Prime Minister Binyamin Netanyahu and the Likud Party for their support.

“To our friends in the opposition who are surprised that a nationalist government would pass a bill in favor of the settlements: That’s democracy.”

Prime Minister Binyamin Netanyahu, who had announced his support for the bill from London earlier on Monday, was not able to return to the country in time to cast his personal vote for it. He had sought a postponement until after his meeting with U.S. President Donald Trump on February 15 before going ahead with the legislation, but Jewish Home insisted on a vote without any further delay.

Members of the opposition parties took turns at the podium denouncing the bill and coalition MKs defending it.

“Our opposition to the bill stems from our opposition to annexation. It does not stem from the problem that there is a nation of residents (in Yehudah and Shomron) or that there are communities there, but rather with the entry of thousands of Palestinians into the state of Israel,” declared opposition leader Isaac Herzog.

The opposition had also attempted to catch the coalition off-guard by withdrawing their hundreds of objections to the bill in order to call for an early vote, but the maneuver failed.

“We will not annex territories with Palestinians. They have their own Palestinian rule and they can vote for the Palestinian parliament,” he said. “We heard all the claims about the bill contradicting international law, and that the High Court will overrule it. It is all nonsense.”

MK Shuli Mualem-Rafaeli (Jewish Home) said that she was dedicating the law to the families of Amona, who were evicted just days ago, and read out the names of the families, and the number of children in each family.

“If adopted into law, it will have far reaching legal consequences for Israel and greatly diminish the prospects for Arab-Israeli peace. The bill has been deemed unconstitutional by the Attorney General of Israel and is in contravention of international law.”

“I urge Israeli legislators to reconsider this move,” he said.

From the U.S., the Anti-Defamation League issued a similar statement warning that the law “will be harmful to Israel’s image internationally and could undermine future efforts to achieving a two-state solution. The bill may also trigger severe international legal repercussions.”