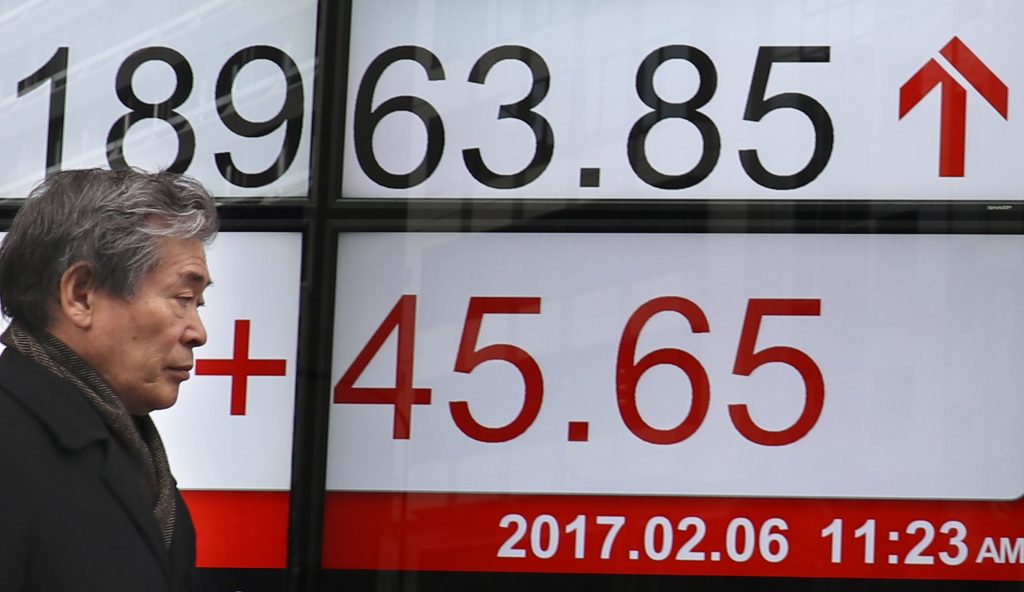 Asian shares crept up on Monday as Wall Street gathered momentum into a busy week of earnings with more than 100 major companies due to report, while the dollar was again hobbled by a lack of progress on U.S. fiscal stimulus.

E-mini futures for the S&P 500 were barely changed and spread betters pointed to a steady start for the major European bourses.

MSCI’s broadest index of Asia-Pacific shares outside Japan inched up 0.4 percent, with Taiwan leading the pack by adding 0.9 percent.

Japan’s Nikkei rose 0.2 percent in the wake of a firmer finish on Wall Street. Japanese Prime Minister Shinzo Abe meets U.S. President Donald Trump on Feb. 10 and 11, with trade and currencies likely to be on the agenda.

A private survey out of China showed activity in the services sector remained strong in January as companies reported a solid increase in orders, though the pace of growth eased.

Local markets seemed unimpressed and Shanghai stocks were barely changed. Dealers are still absorbing Friday’s surprise move by China’s central bank to raise short-term interest rates and whether its attempts to reduce leverage in the system this year will dampen growth.

While the rate increases were modest, they suggested Beijing was intent on both containing capital outflows and reining in risks to the financial system created by years of debt-fuelled stimulus.

It was the first move in the repo rate since October 2015.

“This change is ground-breaking and suggests that the central bank will change onshore rates more frequently,” wrote analysts at ANZ in a note.

“The bottom line is to prevent a cash crunch amidst deleveraging and deflating financial bubbles in certain sectors.”

On Wall Street, banks had ended Friday strongly as President Donald Trump moved to roll back regulations intended to prevent a repeat of the global financial crisis.

“All in all a very mixed payroll report, with the breakdown tending to validate the latest Fed message of a gradual tightening and no need to rush into a hike at the next meeting,” said Deutsche Bank’s global head of forex Alan Ruskin.

“This data plays to the idea that there may be an extended gestation period both for easier U.S. fiscal policy and tighter monetary policy.”

Fed fund futures show only a slim chance of a hike in March and a Reuters poll of primary dealers found none expected a move before the second quarter.

That cautious outlook kept the dollar softer on the yen at 112.52 yen, having lost 2.3 percent last week in its worst weekly performance since late July.

The euro was a fraction firmer at $1.0775 while the dollar dipped against a basket of currencies to 95.763.

Oil prices edged up after the United States imposed sanctions on some Iranian individuals and entities, days after the White House rebuked Tehran for a ballistic missile test.