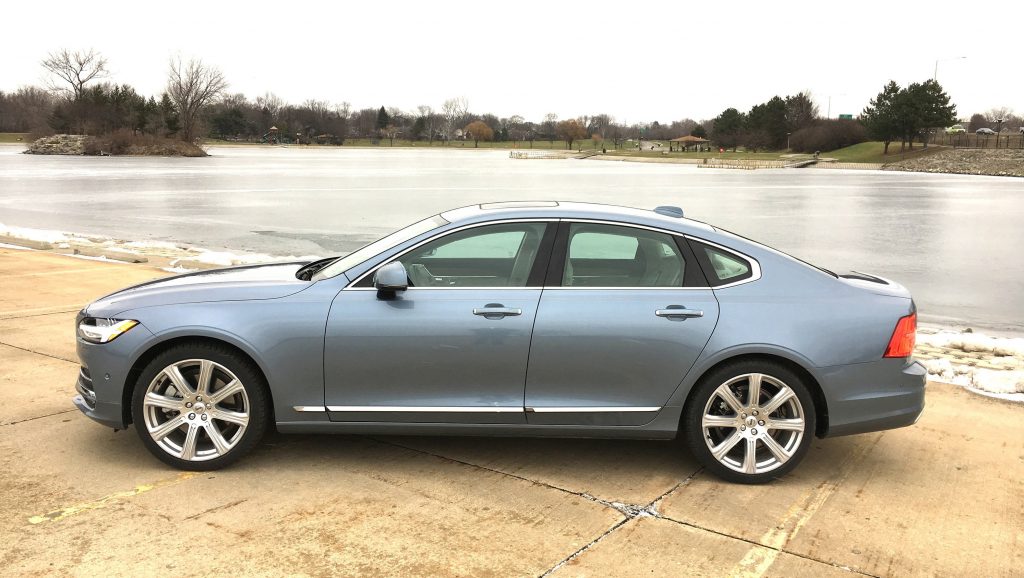 The new Volvo S90 is like a tailor-made suit. It fits just right, balancing sharp lines with elegant comfort. It’s as nice to look at as to luxuriate in, and there were random times behind the wheel where a seam in the seats or some other detail caught our attention and made us feel better, as if the car was a positive reflection of the self. It feels just right, like a nice suit and a flagship sedan are supposed to.

The S90 has been a finalist for many car of the year awards at a time when there is a renaissance in the luxury flagship sedan segment. BMW redesigned its 7 Series for 2016, as did Cadillac for its CT6. The Mercedes-Benz S-Class, the flagship benchmark, is due for a rehab in 2018, even as Hyundai has entered the fray by launching its luxury brand Genesis with the G90 full-size sedan. At anywhere from a half foot to a foot shorter than the competition’s flagships, the S90 is closer to the midsize of the sedan spectrum. Flagships don’t drive sales like crossovers, but they serve as a showcase for the brand’s capability.

The S90 shares the architecture of the XC90 crossover, which topped many 2015 car of the year lists, including our own. The sedan is low and wide, with an athletic stance. Large 20-inch wheels (an extra $1,010 over the standard 19-inch rollers) further buff up the profile.

The design, both inside and out, is one of balance and proportion, Spartan in the Swedish way but more nuanced up close. The front and rear overhangs appear symmetrical and the long nose dips into the grille, which has a vertical orientation at a time when most automakers have opted to stretch it out horizontally. The horizontal elements come at the grille’s edges, in the form of the LED headlights that have a horizontal T-shape wrapping around the side that Volvo calls “Thor’s Hammer.” It’s a modern, more sculpted take on Volvo’s traditional design sense of sleek but simple.

While the S90 is not as large as other flagships, the cabin doesn’t feel much smaller. The sleek, Spartan design opens up the inside, a feeling enhanced by the tester’s cream-colored nappa leather seats, contrasting with the walnut wood trim on the doors, dash and console.

The center stack consists of a large 9-inch touch screen designed like a tablet. It’s underscored by a slim, horizontal line of buttons for volume, tuning, defrosting and hazards. The tablet and its connected infotainment system (called Sensus) take some getting used to but are customizable to display features most used by the driver or passenger. The display can be broken down into four easy-to-see bars for navigation, media, phone and messaging. The system can be slow to respond, especially on startup, which isn’t unusual, but there were other times where it was quicker — and simpler — to use the redundant steering wheel controls.

Once pressed, the info is displayed beneath the tachometer in the excellent 12.3-inch-wide instrument cluster. It keeps both the digital cluster and the overall dash appearance uncluttered, with information available on demand, where some competitors’ systems can feel like information overload.

On the left hand of the steering wheel are controls for semi-autonomous driving features such as adaptive cruise control, which maintains speed and distance from the car in front, and pilot assist, which will keep the car within the lane, as long as the lane markings are distinct.

Tesla’s system is far more advanced, and Hyundai’s is a little more reliable, but Volvo’s tends toward the safe side with frequent warnings and beeps. The system prefers the driver to be in control most of the time, which is what most drivers also prefer. In step with its reputation, Volvo’s semiautonomous features are more about safety overall, with the sensors able to detect vehicles, pedestrians, cyclists and roadside caribou, or other large animals. The alerts and buzzers can be adjusted.

The ride is quiet and smooth, and though there are more powerful and faster power train options, the super- and turbocharged four-cylinder engine drives all four wheels with enough get-up to go at any speed. Overall it feels effortless when the driving is easy, and responsive when the driver wants bigger, better, faster more from the three different drive settings. It’s a fitting kind of adaptability thanks in part to the quick eight-speed automatic transmission.

While there are more powerful power trains, the S90 does an admirable job of providing punch and efficiency, with an EPA-rated 25 mpg combined. It’s not a sports car, and drivers expecting tighter dynamics should steer toward the Germans’ performance lines.

The S90 is more about looking good, and feeling good.