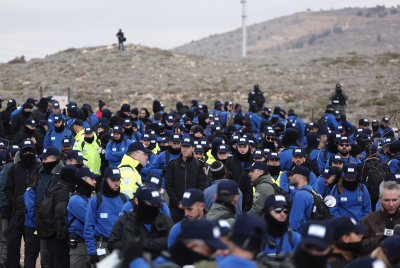 As his party licks its wounds over its failure to prevent the evacuation and demolition of homes in Amona, Jewish Home MK Betzalel Smotrich said that the party’s compensation would be the passage of the Settlement Arrangements Law, scheduled to go before the Knesset for its second and third reading Monday. If the law does not pass, MK Smotrich told Army Radio, “then there will be no government.”

MK Smotrich was present at Amona all week, as police and border guards massed around the outpost and eventually entered the homes and structures in the town and forcibly removed hundreds of protesters and residents who were passively resisting the evictions. “I came to ask forgiveness from the people here because of our failure,” MK Smotrich said. “We were not trying to lead anyone astray when we fought the evictions, we really tried everything to stop this. The justice system forced us to comply with something that was the opposite of what we stand for, and of the mandate the public sent us to the Knesset with.”

Many MKs in the party were pressuring chairman Naftali Bennett to leave the government in the wake of the evictions. “The only thing that allows us to remain here is the prospect that the Settlement Arrangements Law will pass.” Nothing will be allowed to stand in the way of its passage, MK Smotrich said. “I can tell you in the plainest language possible, not just in my name but in the name of Naftali Bennett, that if the law is not voted on by Monday there will be no government.”

Jewish Home’s eight seats are essential to maintaining a majority of MKs in the Knesset. Unless Prime Minister Binyamin Netanyahu will be able to bring in another party to replace Jewish Home – either Zionist Camp or Yesh Atid – the government is likely to fall.

The Settlements Arrangement Law would replace the process now governing Arab claims of ownership of land on which Israeli homes are built – the process that did in Amona, and which will be enacted next week to demolish nine more homes in Ofra. Currently, such claims are adjudicated by the High Court but the bill would instead institute a special arbitration process that would, among other things, advocate land swaps that would replace the land claimed by Palestinians with state land of equal or greater value that is not in dispute. The law is designed to prevent the demolition of homes at outposts and settlements that were built in good faith, but later were discovered to be built on private land. It has been opposed by State Attorney Avichai Mandelblit, who said he did not think he could defend it in the High Court, much less in international courts where Palestinians are likely to file lawsuits.

The Knesset vote on the Settlements Arrangement Law on its second and third reading, which was set for last Monday, was postponed after opponents of the law filed 500 objections to it. The objections were struck by the Knesset Speaker, and the vote is now set for next Monday.

On the possibility that the High Court may strike down the law, MK Smotrich said that the party would try again. “We can no longer tolerate a situation where the Knesset makes a legitimate decision, and time after time the court strikes it down. The court is simply spitting in the face of the government. If the court does not respect the legislative process, it will be difficult for us to respect it in return.”