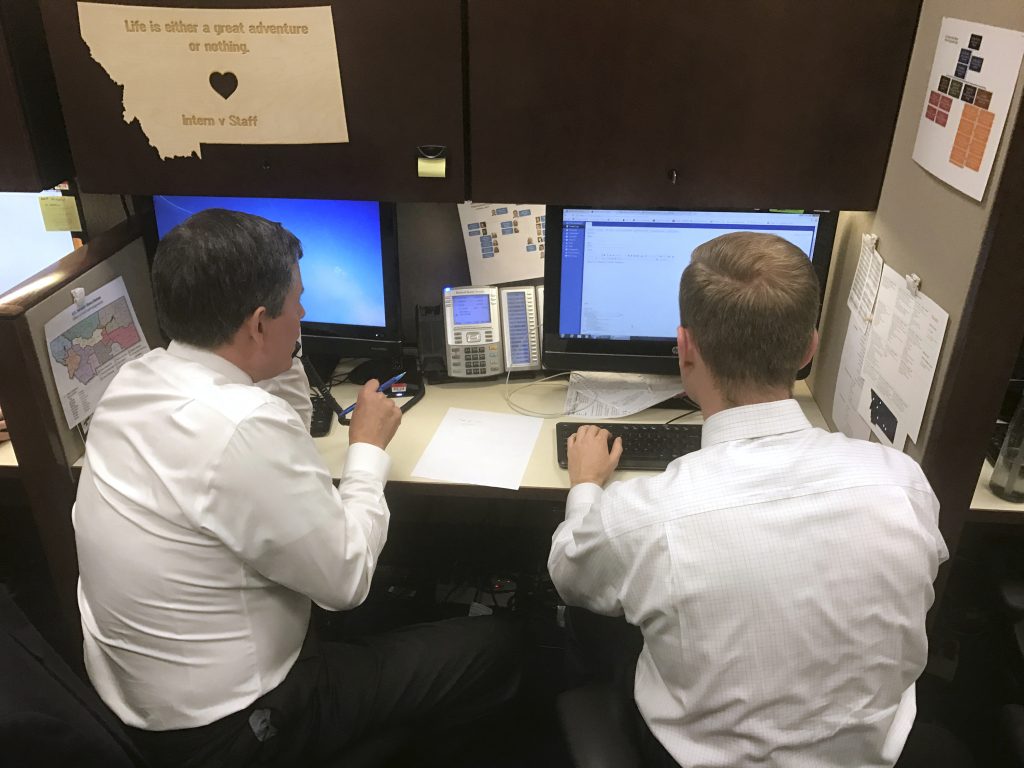 A lot of politics is about the basics, and in Congress that means answering the phone. By that measure, life on Capitol Hill in the Trump era is a struggle.

Whether constituents are calling to request congressional flags, get help with a local issue — or, more likely, to register their support or displeasure with the latest move by President Donald Trump — these days they are more likely to get a busy signal or voicemail than a live human.

Dropped calls mean angry voters, so lawmakers across the Capitol, from Senate Majority Leader Mitch McConnell, R-Ky., to the most junior senator working out of a temporary basement office, are scrambling to handle the surge.

When a local radio host asked McConnell about Trump’s controversial edict on refugees on Wednesday, the Senate’s top Republican first made sure his constituents knew he was taking care of business.

“I appreciate many Kentuckians sharing their comments and for their patience with the jammed phone lines,” McConnell told WHAS AM radio host Terry Meiners. “I might suggest to people who’ve had that experience, the best way to contact me is online.”

Senate officials won’t confirm just how many calls are flooding congressional offices, but it’s a lot, as people take to social media to urge a tsunami of calls. A spokesman for Senate Democratic Leader Charles Schumer of New York, citing Senate officials, says calls have averaged 1.5 million a day this week.

Word has also gotten around that calls are a better way to get a message to lawmakers than emails.

Opposition to DeVos, driven in part by teachers’ unions, is responsible for much if not most of this week’s surge.

“Over 3,000 people have contacted me opposing her. I have had 20 people contact me who support her. In fact, the phones are ringing off the hook,” said Sen. Jon Tester, D-Mont. “The phone system is shut down. There are some senators who aren’t even answering their phone because they don’t want to hear it.”

“I have heard from thousands, truly thousands, of Alaskans who share their concerns about Betsy DeVos,” said Sen. Lisa Murkowski, R-Alaska, in citing her opposition to the nomination. “They have contacted me by phone, by email, in person.”

And senators are taking to social media to offer alternatives. Sen. David Perdue, R-Ga., tweeted a link to an email for comments and promised, “I assure you that our team is working diligently to respond to your calls and messages.”

It doesn’t hurt for the senators to occasionally pitch in themselves, as Steve Daines, an irrepressibly upbeat first-term Republican from Montana, did on Tuesday.

“It was Montanans calling in. I remember Missoula, Bozeman, Butte … It’s always good to pick up the phone and sometimes it surprises the caller — they’re not expecting the senator to pick up,” Daines said. “It’s really important to listen and have a civil, thoughtful conversation.”

Sen. Dean Heller, R-Nev., is in the political crosshairs as the only Republican from a state carried by Hillary Clinton last year facing re-election in 2018. His office tries, against the odds, to have an intern or junior staffer answer each call live, which is impossible right now.

Heller took to Twitter to explain: “We are experiencing heavy call volumes in all our offices. Staff is answering as many as possible. Please continue calling to get through.”

Social media seems to be a big part of the surge, as people openly post and share telephone listings not only for lawmakers’ Washington offices but for their offices back in their own states.

“I’m certainly seeing a lot of my teacher friends on [social media] who are politicized in ways that they never have been before,” said Keith Barton, a professor of education at Indiana University who’s had limited success in getting through on the lines of freshman Sen. Todd Young, R-Ind. “People who would have had liberal opinions, who might have liked something, but who now are writing and calling and emailing — things that they never would have done before; it’s been very striking just how politicized these middle-of-the-road kind of people are.”

“They’re putting office numbers on the internet and social media,” said Texas GOP Sen. John Cornyn. “In some part this is a protest against the Trump administration and confirmation of some of the nominees.”

While it’s the Republicans under siege right now, Democrats are soon to face an effort by conservative groups to gin up calls backing Trump’s pick for the Supreme Court, Judge Neil Gorsuch.