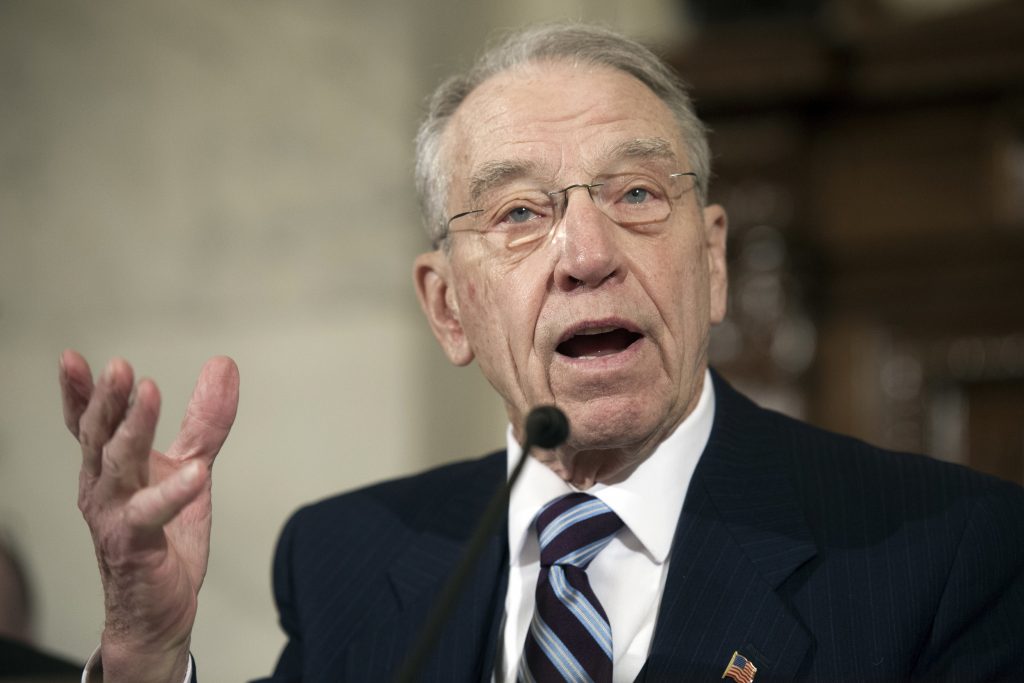 Senate Judiciary Chairman Charles E. Grassley is laying out his plan to get Judge Neil Gorsuch on the Supreme Court by the time Congress recesses for a spring holiday.

The Iowa Republican has a roughly six-week timeline for getting Gorsuch, the 10th Circuit appellate judge from Colorado who was named Tuesday night by President Donald Trump as his choice to replace the late Antonin Scalia on the highest court.

“I’m not saying absolutely six weeks because you always try to be accommodating to the minority as long as they are reasonable, and so we have to work things out, but it kind of works out to be about six weeks,” Grassley said in an interview with Roll Call.

He anticipates only one day of the senators questioning Gorsuch in full view of the klieg lights and TV cameras, with three days of hearings overall.

“We will try to have the hearing in one day. But before that one day that you ask him questions, there’s going to be one day of speeches by members of the committee, and the candidate’s going to have to sit there and listen to that,” Grassley said. “That could be a short day if we’ve got one round. Or if we’ve got two rounds or three rounds, it could get to be a long day, but … my intention is to get it done that one day.”

The third day would be for outside witnesses.

Grassley said that the six-week timeline for Gorsuch should be viewed in the context of how much both the nominee and the committee staff need to do to get ready for Supreme Court confirmation hearings. He said additional lawyers would be detailed to the Democratic and Republican committee staff to support the process of reviewing Gorsuch’s lengthy judicial record.

Gorsuch has been running around the Capitol complex making courtesy visits to senators, particularly Judiciary Committee members. He is scheduled to meet with ranking Democrat Dianne Feinstein of California at 4 p.m. on Monday, according to a person familiar with the judge’s calendar.

Grassley said in the interview that he had a “very excellent” relationship with Feinstein, who replaced Sen. Patrick J. Leahy of Vermont as ranking member this Congress with the Vermonter moving over to lead the minority on Appropriations.

“Every conversation that I’ve had with her now that she’s ranking member has been not only friendly, but has been productive, and these little heads-to-heads that you see us having when the committee’s actually functioning, work things out right then,” Grassley said. “I hope she would tell you that I have accommodated her.”

Grassley and Feinstein have long worked together, particularly as the leaders of the bipartisan caucus on international narcotics control, but the increasingly toxic and divided atmosphere around the Senate might make any bipartisanship difficult for Trump’s Supreme Court nominee.

“There may be partisan votes on the person, but this needs to be something that at least the process ought to be very bipartisan,” Grassley insisted.

Many Democrats are still fuming over the decision by Republicans, including Grassley, to not hold hearings on former President Barack Obama’s Supreme Court pick Merrick G. Garland, leaving the Supreme Court seat vacant.

Minority Leader Charles E. Schumer of New York has already set forth that Gorsuch should need 60 votes to be confirmed.

“Requiring 60 votes has always been the right thing to do on Supreme Court nominations, especially in these polarized times, but now — in this new era of the court, in this new administration — there is an even heavier weight on this tradition,” Schumer said on the Senate floor.

Past the hearing, Grassley anticipated one week for Gorsuch to respond to written questions for the record, with the nomination going on the committee agenda after that. Under the panel’s longstanding rules, any senator can request the nomination be held over for an additional week. All told, that comes out to about six weeks.

“Then we vote him out, and then you’ve got to ask McConnell when he’s going to bring him up” for a vote by the full Senate.

Grassley also reiterated his belief that the Senate would be ill-advised to keep its current April recess schedule for a spring holiday in the event Gorsuch has yet to win confirmation.

“We’re going two weeks, and I think that two weeks of Congress not being in session isn’t a very good excuse for the Supreme Court seat not being filled, as long as we’re doing what I said I was going to do during the election, before I was elected even,” Grassley said of his pledge to process the nominee of the person elected president in 2016, whether that was Donald Trump or Hillary Clinton.