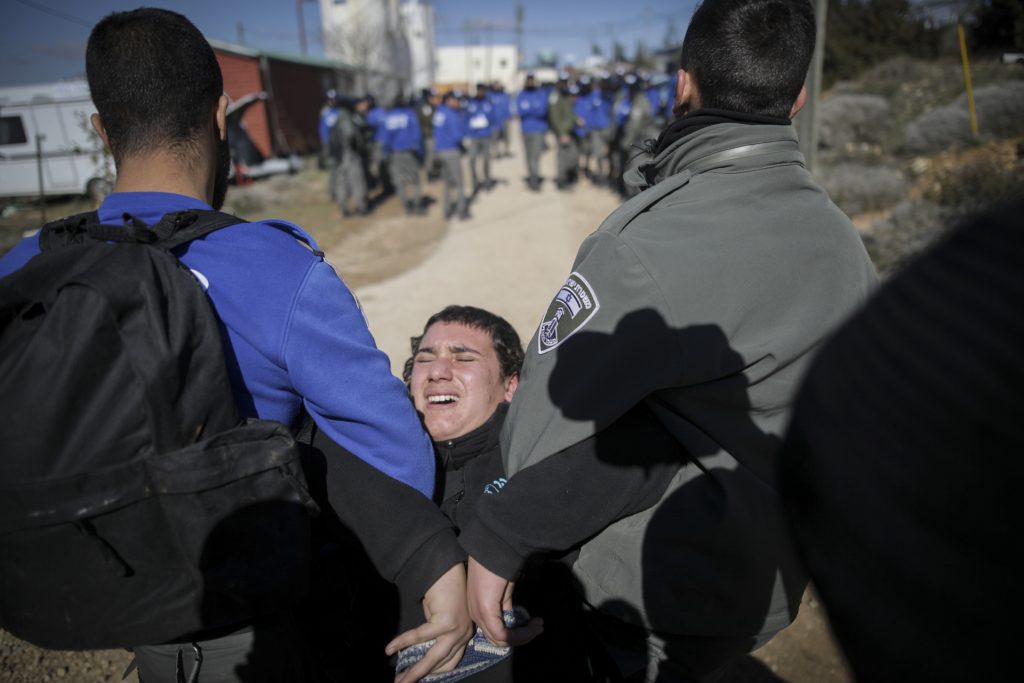 A number of protesters filed complaints about police violence, saying that they were beaten by police outside the view of cameras, and complained that police had fired tear gas into the shul – a charge police denied. Police, meanwhile, said the protesters threw rocks and metal objects at them, calling them “miscreants and lawbreakers of the most violent kind.”

The shul was the last holdout in Amona, after police worked throughout the night to remove protesters and families from the three-dozen buildings that are set to be demolished, by order of the High Court. Some 20 protesters said that they were hurt by police, while police said that more than 20 officers were injured in the mini battle between both sides. Some 200 protesters had barricaded themselves inside the building already Wednesday night, blocking doors and windows with metal plates, chains, and concrete blocks. Police cut their way through the plates and chains with metal cutters, and used water guns to subdue those inside.

Israel Radio reporters said that inside the building, there were burning tires, a half-foot of water, graffiti on the wall, and acrid smoke in the air. According to reporters, protesters had drawn swastikas on the wall of a hallway outside the shul itself (not inside, as some reports said) and scrawled graffiti that read “Ishmael (instead of Israel) police,” and “death to the Zionists.” Amona residents said that they did not ask for the group to come and assist them, and they did not represent the residents.

Commenting on the events, Public Security Minister Gilad Erdan placed the blame for the violence directly on the protesters, who were “hooligans worthy of all condemnation, who disrespect Judaism and have no respect for their religion, their rabbis or the shul. I expect police to act with determination to remove them. Anyone who has anything to say about responsibility for the violence should remember that police were wearing video cameras.”

Not far away from Amona, Prime Minister Binyamin Netanyahu said that he expected protesters to respect soldiers and police. “This process is as hard on them as it is on the protesters,” Netanyahu said at a memorial service for former Ariel Mayor Ron Nachman, adding that the government had tried very hard to avoid the evacuation, but that “we had no choice after the High Court ruling. We will continue to build in Yehudah and Shomron, and the fact that we are here in Ariel is the greatest proof of that. I can guarantee you that Ariel will remain a part of the State of Israeli forever.”

Residents who were removed from their homes were taken to temporary housing in Ofra, the town next to Amona. The High Court on Wednesday rejected a deal in which the government would place caravans on another part of the hilltop, after Arabs filed petitions claiming ownership of the parcels where the caravans were to be placed. Speaking Wednesday night, Prime Minister Binyamin Netanyahu said that he was appointing a committee to examine alternatives for the Amona evictees, including the possibility of setting up a new settlement for them. The final High Court-ordered deadline for the demolition of buildings at Amona is next Wednesday. Officials said that the shul itself would be taken apart and moved, and reconstructed elsewhere.