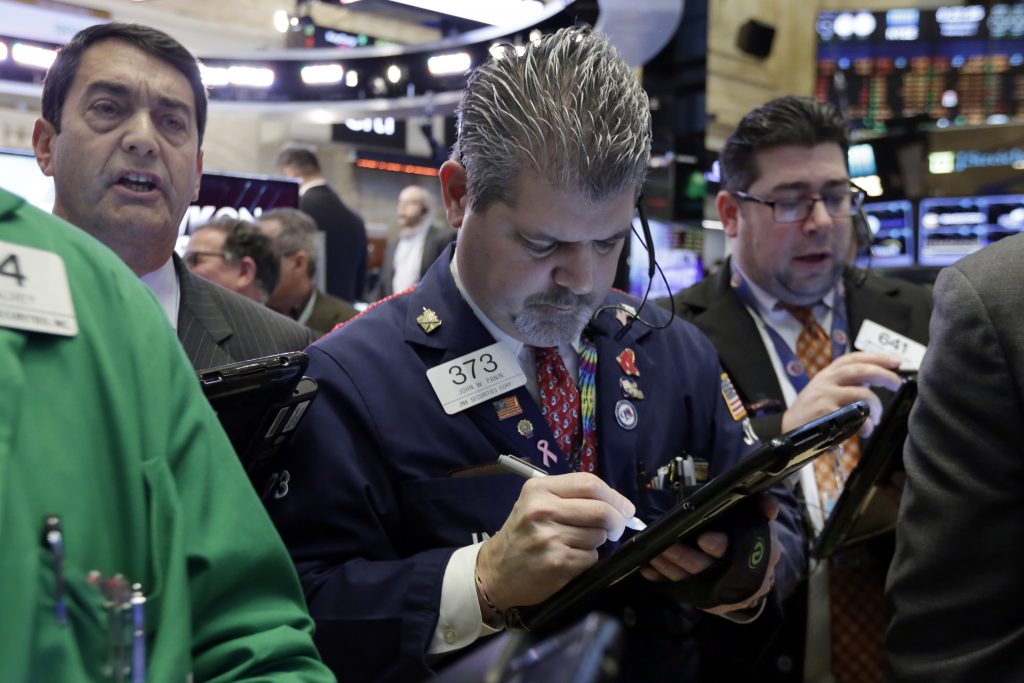 Stocks are slightly down on Wednesday after an early rally ran out of steam. Technology stocks are up after Apple said iPhone sales improved in its last quarter, which sent its stock to its highest price in more than a year. Most other stocks are trading lower. Companies that pay big dividends, like utilities, are taking some of the biggest losses.

The market has made only small moves in recent days as investors wait for the Federal Reserve to wrap up its latest policy meeting later Wednesday.

APPLE POLISHED: Apple jumped to its highest price in a year and a half after it said consumers snapped up its new iPhone 7 and 7 Plus over the last three months. That ended the first-ever slump in iPhone sales, and Apple’s first-quarter results were stronger than analysts expected. Its stock rose $7.32, or 6 percent, to $128.67. The big gains for Apple, the world’s most valuable publicly-traded company, took technology stocks higher.

Chipmaker Advanced Micro Devices also climbed $1.42, or 13.6 percent, to $11.79. AMD reported a profit when analysts expected a loss, and its sales were greater than expected.

JOB GAINS: A survey showed that private U.S. employers hired new workers at a faster pace in January, a sign that the economy could be getting stronger. The hiring was greater than expected, and the construction, manufacturing, health care and shipping industries all adding jobs at a solid pace.

The U.S. government will release its own monthly jobs report on Friday.

BONDS: Investors reacted to the hiring report by selling government bonds, which are relatively safe investments that are in greater demand when the economy seems weaker.

THE PITS: Mailing equipment and software company Pitney Bownes slid $2.71, or 17.1 percent, to $13.21 after its quarterly sales fell short of expectations and its profit forecast disappointed Wall Street.

ENERGY: Oil prices stayed within a small range. U.S. crude added 19 cents to $53 a barrel in New York. Brent crude, the benchmark for international oil prices, gained 32 cents to $55.90 a barrel in London. U.S. oil has stayed between roughly $52 and $55 a barrel for the last two months.

The S&P 500’s energy company index is on track to fall for the fifth day in a row. It’s down 4 percent over that time and has sunk 7 percent since Dec. 13.

ALUMINUM ACTIVISM: Lightweight aluminum products maker Arconic surged after its largest shareholder said the company needs new leadership. Elliott Management nominated five potential directors to Arconic’s board. The company said it stands by CEO Klaus Kleinfeld and that Elliott’s moves are not in the best interest of all shareholders.

Arconic makes lightweight engineered products for aerospace and autos, which some investors saw as more promising than Alcoa’s mining and smelting business. But since the companies split on Nov. 1, Arconic stock is almost flat and Alcoa has jumped more than 60 percent. Arconic gained $2.11, or 9.3 percent, to $24.84.

OVERSEAS: Stocks in Europe got a boost from the ADP survey and a report that said manufacturing in China grew at its fastest pace in two years in January. Heavy government spending and more lending by banks helped keep the economy steady. Germany’s DAX added 1 percent while the CAC 40 of France rose 0.9 percent. The FTSE 100 index in Britain picked up 0.1 percent. Japan’s Nikkei 225 rose 0.6 percent after a skid on Tuesday. The Kospi in South Korea jumped 0.6 percent. Hong Kong’s Hang Seng fell 0.2 percent.