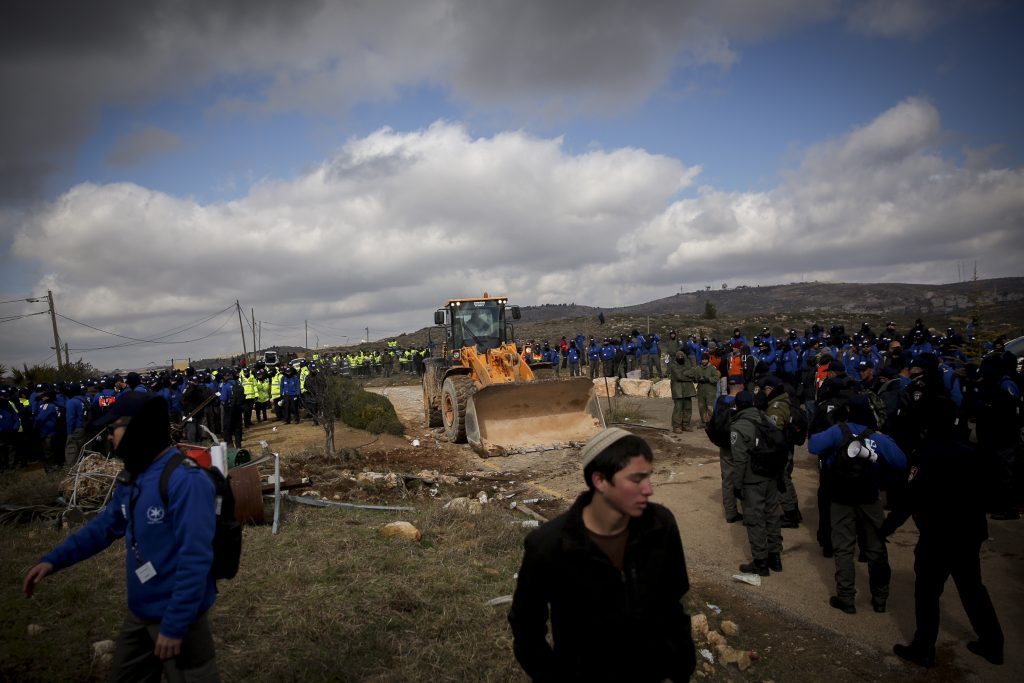 MKs and Ministers responded to the evacuation of Amona Wednesday afternoon, with many saying that the outpost would be rebuilt – while calling for residents and protesters to refrain from violence. According to reports, several police were injured when protesters set off devices that spread pepper spray around, while at least one border guard refused to escort a family out of a house.

As many as 1,000 police and border guards were on hand to remove the several hundred residents and protesters who were holed up inside houses on the Amona hilltop. At least six officers required treatment for what they said was a pepper spray attack by protesters. In a statement, police said they were “acting with caution and sensitivity, but were forced to deal with attacks by anarchists who threw chemicals on them and caused eye inflammations. Police will not allow this kind of behavior, and will respond in an appropriate manner.” There were also reports that some protesters threw rocks at officers. Police said that it was unclear when the evacuation would be completed.

The evacuation came after security forces massed around the outpost of Amona overnight Tuesday, in preparation for the final evacuation and demolition of over three dozen homes at the site. After distributing eviction notices on Tuesday, security forces on Wednesday morning warned residents that they had one more chance to leave the site voluntarily before police forced them to leave. The actual entry into the outpost came around noon time, with police going from house to house to escort residents from the structures to be demolished. Many had to be carried out, as they refused to exit when police came for them.

“The residents of Amona are heroes,” said Education Minister Naftali Bennett. “For 20 years they remained on the hilltop, not for personal gain but out of a deep sense of mission for their nation and land. The truth of the matter is that we started this struggle when the High Court had already ruled that the outpost was to be demolished. We did everything we could to try and prevent this, but unfortunately our efforts did not succeed. From the remains of this difficult day will grow hope, and from the ruins we will build a new Amona.”

Deputy Foreign Minister Tzippy Hotovely agreed. “The eviction Amona residents is very difficult, and it pollutes the concept of ‘rule of law.’ I call on the residents to fight to support the Settlements Arrangement Law, and to remain the pioneers of the settlement of the Land of Israel. There will be a new Amona.”

Opposition leader, MK Yitzchak Herzog of Zionist Camp, said that he “understands the pain of the families,” but that he called on them “to respect the decision of the High Court and not to cross the line of legitimate protest into violence. Police are doing what they have been ordered to do, and no one dare raise a hand against them.”

Where the Amona residents are to go when they are evicted is not clear. The final date for the evacuation and demolition of Amona was set as February 8th, by which time, the residents were promised, caravans would be set up for them on another part of the hilltop. Those caravans are nowhere to be seen; a plan by the government to place the caravans on another side of the hilltop fell through, as the High Court ruled Tuesday that the parcels where the caravans were to be built are in dispute, as are the Amona homes themselves. The decision Tuesday extended the injunction against the installation of the caravans ordered last Tuesday.