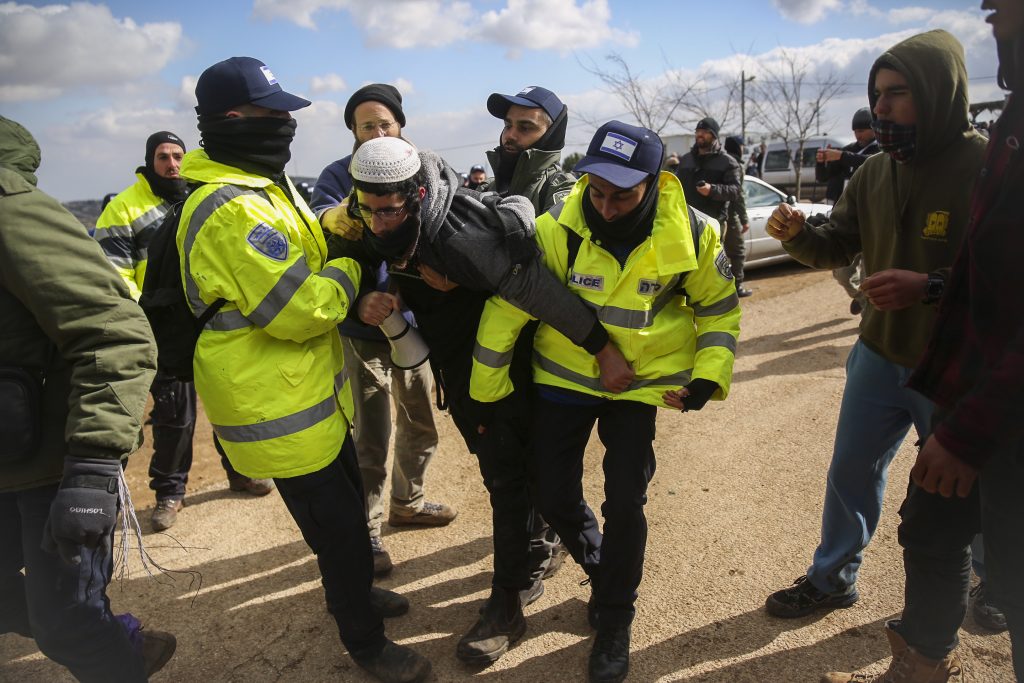 With barely an hour of daylight left late Wednesday afternoon, police were said to be debating whether or not to continue the evacuation of Amona into the nighttime hours, or to call it a night and return to work Thursday. According to Israel Radio, police have not even begun to evacuate the 34 families whose homes are slated to be demolished by order of the High Court; they have been busy throughout the day removing protesters who are refusing to leave voluntarily.

Approximately 1,000 police and border guards were participating in the evacuation, and little progress has been made, Israeli Radio reporters on the scene said. Four police were required to remove each of the protesters, who were engaging for the most part in passive resistance – refusing to move, and making it as difficult as possible for police to remove them, while not raising a hand to defend themselves. Reporters said that the many of the protesters were “very husky,” and as such police were finding it difficult to remove them.

Police are still unsure as to how to proceed when the sun goes down, Israel Radio said. Amona does not have streetlights or other outdoor lighting, and while police could bring up spotlights, residents and protesters inside the houses on the hilltop would likely douse their lights, making it very difficult for police to assess the likely level of resistance in a home. In addition, police fear that protesters could reinforce their numbers in the dark; even though the main roads are closed off, there is a strong possibility that protesters could reach the hilltop during the night under the nose of police. In addition, there is a greater possibility of injury to protesters if police try to remove them at night. The weather will also play an important role in the decision; temperatures on the hilltop were expected to be below freezing Wednesday night,  In any event, there was no chance that the evacuation could be completed before sundown.

Several Knesset members, including Likud MK Oren Chazan and Jewish Home MK Betzalel Smotrich, were in Amona. Smotrich blamed Defense Minister Avigdor Liberman for the scene at Amona. “Liberman could have waited until the High Court decided on the last petition against the deal to build caravans on the other side of the hilltop, but he insisted on conducting the evacuation now. I don’t understand why, but we have complained to Prime Minister Binyamin Netanyahu about this.”

The final date for the evacuation and demolition of Amona was set as February 8th, by which time, the residents were promised, caravans would be set up for them on another part of the hilltop. Those caravans are nowhere to be seen; a plan by the government to place the caravans on another side of the hilltop fell through, as the High Court ruled Tuesday that the parcels where the caravans were to be built are in dispute, as are the Amona homes themselves.

In addition, Smotrich said that Liberman had ordered the destruction of hundreds of dunams of Jewish-owned farmland adjacent to Amona. Jewish Home chairman Naftali Bennett also demanded that Netanyahu intervene to prevent that from occurring. “On such a difficult say when residents are being thrown out of their homes because of a High Court order, we must act in a very sensitive manner, and not in a cruel manner,” by “volunteering to give away parts of the Land of Israel,” Bennett said. In a statement, Liberman’s office denied that he had authorized the demolition of the farmland, and that if such a decision was made, it was not by him.