Regional With NYPD Deal, de Blasio Has 100% of Workers on Contract
Regional 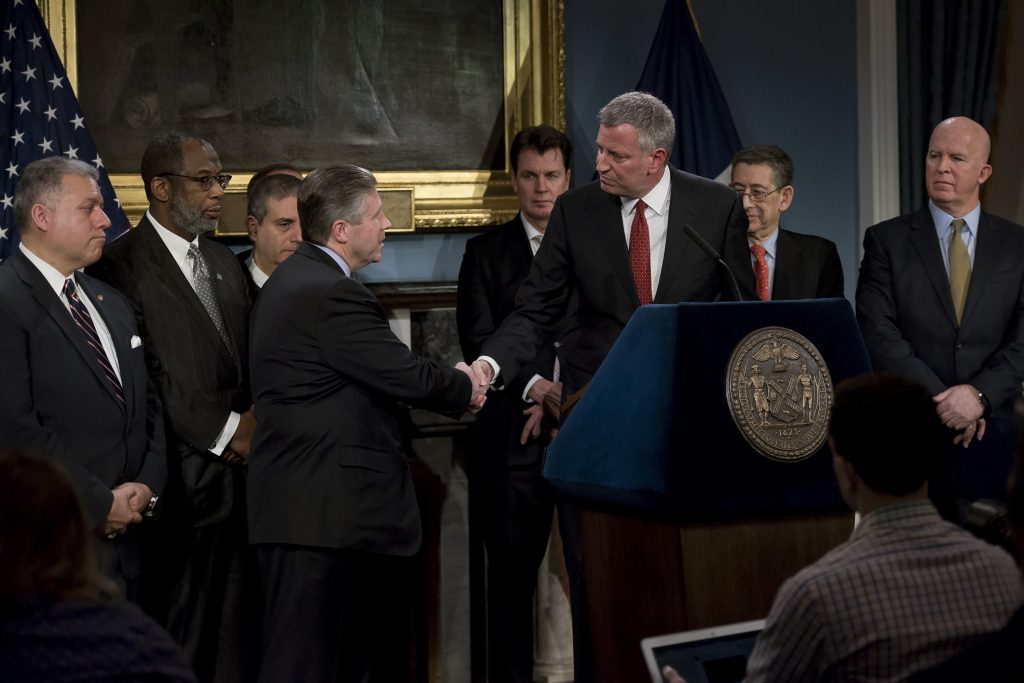 With New York City and its largest police union settling on a tentative five-year labor contract on Tuesday, Mayor Bill de Blasio completed labor deals with every single one of the city’s employees.

The agreement, which includes salary increases while also agreeing that all 23,810 patrol officers will wear body cameras by the end of 2019, “is a big step forward for a vision of safety in which police and the community are true partners,” de Blasio said at a press conference with union and police officials.

The New York Police Department, the nation’s largest, already has a pilot program with cameras for 1,000 officers. But further rollout was stymied by a lawsuit, which the union agreed to drop as part of the deal.

The contract agreement removes a potentially expensive uncertainty that was a hold-over from former Mayor Michael Bloomberg, who left office at the end of 2013 with every public-sector labor contract long-expired.

Since taking office, de Blasio’s administration has chipped away at negotiations with teachers and other unions, but the Patrolmen’s Benevolent Association contract was still a major sticking point. Members of this largest police union, which represents rank-and-file police officers, have held loud protests in front of the mayor’s house and turned their backs at him in a searing display of frustration at police funerals.

But there were smiles and praise from both sides Tuesday at the City Hall press conference.

“This agreement is the result of many hours spent negotiating between the city and the PBA…” de Blasio said. “It doesn’t matter how far apart the parties start; it matters where they end up.”

Reached at about 4 a.m. on Tuesday, the agreement will cost the city $530.4 million altogether, most of which will be covered by a labor reserve fund. Including healthcare savings, the net cost to the city is $336.7 million.

The deal, covering nearly 24,000 police officers, includes a 2.25 percent bump in base salary for patrol officers as they shift to a new method of neighborhood policing which focuses more on beat patrols and community interaction.

The increase that patrol officers get will be offset in part by lower starting salaries for new hires, although their maximum salaries will rise. Upon approval by union members, the new contract would go into effect March 15.

The city will also support the union’s efforts to get state lawmakers to provide disability benefits at three-quarters of salary, while the union agreed to drop other lawsuits against the city.