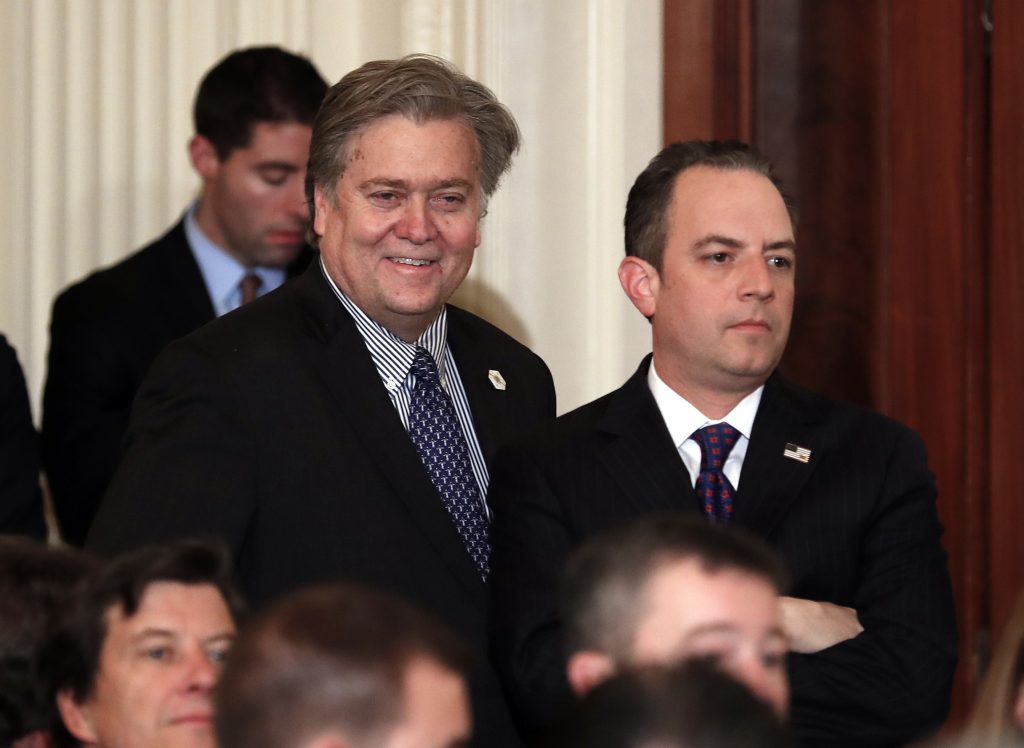 Since taking office 10 days ago, President Donald Trump has moved to consolidate power within a small cadre of close aides at the White House.

He’s added a senior political adviser to the National Security Council and appears to have cut out Cabinet secretaries from decision making on some of his top policies, including the immigration and refugee order that led to protests, legal challenges and temporary detention of some legal U.S. residents this weekend.

Trump has empowered a small group of advisers, some of whom have no experience in government, to tackle a broad range of issues — including national security, the immigration policy, U.S. relations with Mexico and plans to repeal President Barack Obama’s health care law.

The inner circle includes loyal campaign aides, his son-in-law (Jared Kushner) and the advisers who ran Trump’s populist, outsider bid for office. Here’s a look at President Trump’s inner circle and how they’re shaping the policies that are shaking up Washington:

Every major decision at the new White House has involved Bannon, a media executive who became Trump’s top political adviser in a shakeup in August and quickly infused Trump’s campaign with an anti-establishment fervor.

Bannon’s power has only grown at the start of the administration. He is typically at Trump’s side in the Oval Office. He helped write the new president’s inaugural address — marked by the reference to “American carnage.” He shaped executive actions pulling the U.S. out of the Trans-Pacific Partnership trade deal and freezing the U.S. refugees program.

Saturday’s memorandum reorganizing the National Security Council extends Bannon’s reach further. He will now have a seat at regular meetings on national security, while the incoming director of national intelligence and the chairman of the Joint Chiefs of Staff will attend only as required by the subject matter.

Bannon is a former naval officer and Goldman Sachs executive who led Breitbart News before joining Trump’s campaign. Under his tenure, Breitbart became the voice of the alt-right movement and critics pointed to coverage they said espoused racist views.

His rhetorical influence on the president was particularly clear last week. In signature style, Bannon referred to the media as the “opposition party” in an interview. Trump repeated the phrase a couple of days later.

Trump’s policy rollouts and speeches also bear the fingerprints of Miller, a 31-year-old senior policy adviser who joined his campaign after working as a top aide to Alabama Sen. Jeff Sessions, Trump’s pick for attorney general.

Miller played an influential, behind-the-scenes role in derailing efforts in the Senate to pursue an immigration overhaul after the 2012 elections. After joining Trump’s team, Miller played multiple roles on the campaign, writing Trump’s speeches, developing his policies and frequently serving as a warm-up act at rallies.

At the White House, Miller has been the new administration’s policy guru with a heavy focus on immigration. He and Bannon were instrumental in the drafting of the executive order that established a temporary travel ban on citizens from seven Muslim-majority nations. Amid chaos at airports and confusion over the ban’s impact on legal U.S. residents, Miller was running Saturday night meetings on the order.

But that has also made him the subject of criticism. MSNBC’s Joe Scarborough accused Miller on Monday of not doing enough to loop in agency heads about the executive order and said the White House adviser had gone on a “power trip.”

Considered a “first among equals” in the competing power circles in Trump’s West Wing, Kushner often has the last word as his father-in-law makes decisions and, as family, has unprecedented access to the president in the White House residence.

Kushner emerged as one of Trump’s most powerful campaign advisers during his father-in-law’s often unorthodox presidential bid — a calming presence in an otherwise chaotic campaign. He was usually at Trump’s side and on his plane during the campaign’s final weeks.

At the White House, Kushner has played a key role dealing with foreign government officials and Trump has entrusted him to resolve the dispute with Mexico over the border wall and has indicated that he will take the lead in negotiations between Israel and the Palestinians. Asked about Kushner’s involvement in foreign policy, a White House official said he was “particularly well-suited for sensitive negotiations and relationship building.”

Kushner also championed the pick of his friend Gary Cohn, the president of Goldman Sachs, for a top White House economic post.

President Trump’s chief of staff is a former chairman of the Republican National Committee and Republican operative from Wisconsin with close ties to House Speaker Paul Ryan (R-Wis.).

If Bannon has become Trump’s policy soul-mate, Priebus appears more focused on organization and implementation. When Trump signs executive orders in the Oval Office, it is often Priebus who hands the president the paperwork.

The longest-serving chairman in Republican Party history, Priebus remains popular among RNC members and will help Trump stay connected with members of Congress, the party’s establishment, fundraisers and activists across the nation. He is in frequent touch with Ryan, one of his oldest political allies, and will serve as a key emissary to House and Senate Republicans.

The veteran Republican pollster served as Trump’s final campaign manager, joining the team with Bannon last summer at a crucial time for the insurgent campaign.

Conway’s title is counselor to the president and she has frequently been the face of the new administration, appearing often on Sunday shows and cable newscasts to promote Mr. Trump’s message.

After White House press secretary Sean Spicer claimed that Trump had the “largest audience to ever witness an inauguration, period,” Conway defended him on NBC’s “Meet the Press,” arguing that he was giving “alternative facts.”

Conway, who also advised Vice President Mike Pence when he was Indiana governor, is using the West Wing office once occupied by former Obama adviser Valerie Jarrett, who led the former president’s outreach to the U.S. business and political community. She is expected to help shape the administration’s policies on women and veterans.