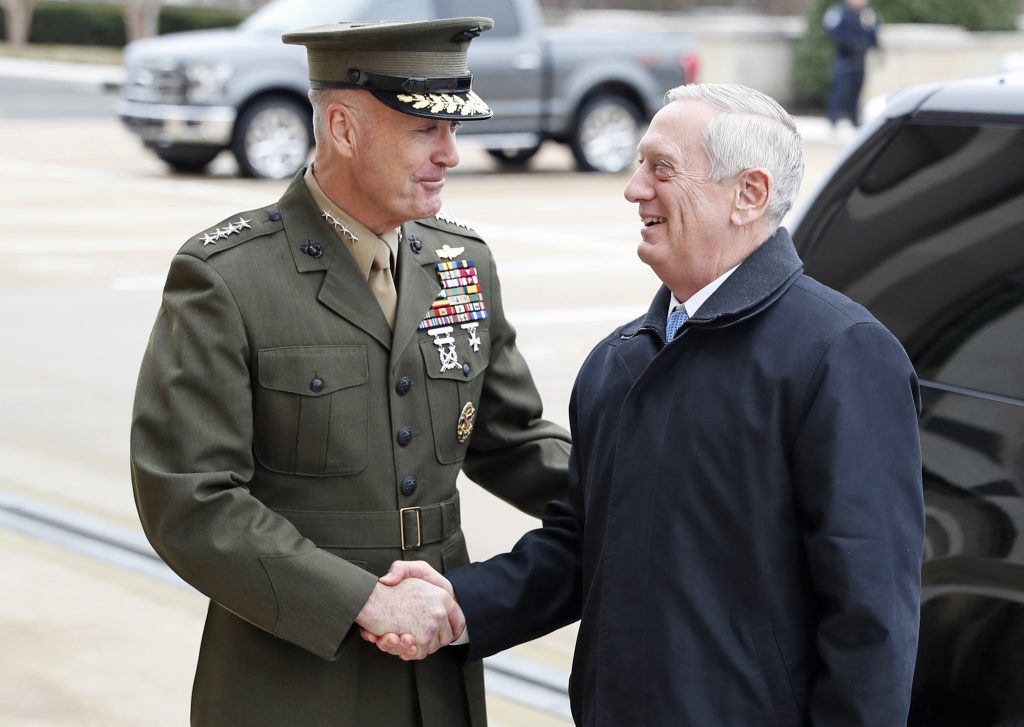 The visits also reflect the urgency of concerns on both sides of the Pacific about North Korea’s nuclear and ballistic missile programs. Mattis, a retired four-star Marine general, inherited a North Korea problem that has grown more worrisome as the communist nation’s leader, Kim Jong Un, claims progress toward fielding a ballistic missile capable of delivering a nuclear warhead to the United States. Former Secretary of State John Kerry said in early January the U.S. may need “more forceful ways” of dealing with North Korea if it develops a ballistic missile of intercontinental range.

Mattis, who entered office hours after Trump on Jan. 20, is due to arrive Thursday in Seoul, where he will meet with his counterpart, Defense Minister Han Min Koo, amid a swirl of political turmoil. President Park Geun-hye was impeached in December and the constitutional court is reviewing whether to formally end her rule. Later in the week, Mattis is to hold talks in Tokyo with Defense Minister Tomomi Inada and other senior Japanese government officials.

North Korea is expected to be at or near the top of Mattis’s agenda. Beyond its long-range missile aspirations, the North already has missiles capable of hitting South Korea as well as U.S. bases in Japan.

Trump said during the campaign that while he supports the alliances with Japan and South Korea, he would not rule out abandoning them if they refuse to pay more for their own defense. “It could be that Japan will have to defend itself against North Korea,” he told a campaign rally in August. The first foreign leader he met as president-elect was Japanese Prime Minister Shinzo Abe; they’ll meet again in Washington on Feb. 10.

Mattis has said little in public since taking office. But he has left no doubt that America’s security alliances, including those in Asia, are a top priority. He is the first recently retired military officer to serve as defense secretary since George C. Marshall in 1950-51 during the Korean War.

Pentagon chiefs regularly visit South Korea and Japan, reflecting their status as U.S. treaty allies. Chuck Hagel, who visited the heavily guarded Demilitarized Zone between North and South Korea as defense secretary in September 2013, said in an interview that Mattis is making the right move.

“It was a smart decision” to visit these allies early, Hagel said. He believes officials in Tokyo and Seoul are wondering: “Can we rely on the U.S.? What is the future here?”

Hagel said Tokyo and other U.S. allies in Asia have been particularly upset by Trump’s decision to pull the U.S. out of a Pacific Rim trade initiative, the Trans-Pacific Partnership, the centerpiece of former President Barack Obama’s effort to strengthen U.S. economic ties in the region.

Kent Calder, director of Asia programs at Johns Hopkins’ School of Advanced International Studies, said Mattis could bolster Japan’s confidence by explicitly reaffirming that disputed East China Sea islands are covered by the U.S.-Japan defense treaty. The islands are controlled by Japan, which calls them the Senkaku, but also claimed by China, which calls them the Diaoyu.

China’s regional role and military modernization will also loom over Mattis’s meetings in Seoul and Tokyo. All are hoping to persuade China to use its influence over North Korea to contain or curtail Pyongyang’s nuclear and missile programs.

Mattis said at his Senate confirmation hearing that the U.S. should do whatever it takes to stop North Korea from acquiring a nuclear-capable missile of intercontinental range.

Anthony Ruggerio, a senior fellow at the Foundation for Defense of Democracies, a foreign policy think tank, said Mattis could advance U.S. security interests by encouraging Tokyo and Seoul to improve their bilateral relations, which are strained by disputes.

“While the two of them may have issues with each other, they need to be unified against North Korea,” Ruggerio said.