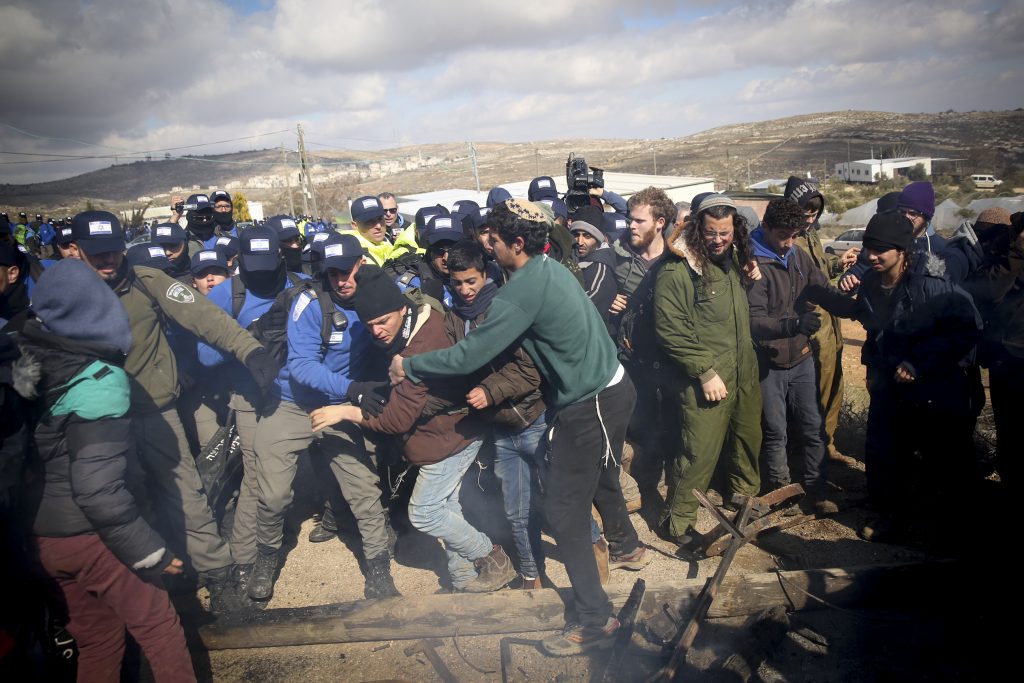 The evacuation of Amona appeared set to continue into the evening, after security forces initially announced that they would suspend the operation until Thursday morning.

Approximately 1,000 police and border guards were participating in the evacuation, and little progress has been made, Israeli Radio reporters on the scene said. Four police were required to remove each of the protesters, who were engaging for the most part in passive resistance – refusing to move, and making it as difficult as possible for police to remove them, while not raising a hand to defend themselves. Reporters said that the many of the protesters were “very husky,” and as such police were finding it difficult to remove them.

Security forces arrived early in the day to evacuate the community’s 42 families and the many hundreds of youths who managed to reach the outpost despite roadblocks thrown up by the police and army.

The instructions given to the young people and the residents was to resist, but not to resort to violence, resulting in far fewer physical clashes than occurred in the evacuation of Jewish homes in Gush Katif during the disengagement. Police also took steps to minimize the violence.

“We will not raise a hand against a police officer or a soldier, but we will not leave our homes willingly on our feet,” said Rabbi Yair Frank, the Rav of Amona. “They’ll need to carry us.”

Activists encouraged one another to remain as obstinate as possible, and compel security personnel to remove them by force while refraining from violence.

“During the evacuation nobody get up and go, even if the police tell you to. We are not evacuating by choice. Make the police remove you with as much force as possible, without violence,” the messages said.

“The best thing would be for four police officers to have to take one of us out. Police won’t act violently if you don’t act violently. The prime minister has an interest in seeing the evacuation go ahead with as little gore as possible. We will all try to make the evacuation take as much time as possible. We will not get up and leave, we will tie ourselves to each other and to furniture and do what we can to stop a Jewish community from being destroyed.”

In the end, 13 of the community’s 42 families left voluntarily.

On Tuesday, the IDF posted a notice at the entrance to Amona, stating that within 48 hours, all persons must exit the area and leave no property behind. Security forces also requested to propel an observation balloon to the sky above Amona from Tuesday night until Feb. 2.

Residents of Amona held an assessment of the situation overnight Tuesday, following which they called on the government to implement the draft plan for the town’s relocation.

“Unfortunately, the government hastens to destroy Amona in an inexplicable way,” said Avichai Boaron, head of the campaign to save the town.

“This afternoon the Supreme Court held a comprehensive hearing on the question of the absentee property draft plan, in which great efforts were invested by all parties, and in particular by the residents. The Court declared that it would announce its ruling as soon as possible. However, at this moment the government instructed the military not to wait for the decision of the Supreme Court and is planning to begin the evacuation of Amona at 6 a.m. contrary to all logic,” he added.

“The residents of Amona agreed last month to the absentee property draft, with the prime minister and education minister promising to do everything in their power to maintain it. The state decided to kick this plan just before its implementation and again violate the agreement it reached with the residents and create unnecessary tension and evictions. We call on the political echelon: Calm down. Respect the agreement. Let the court decide. Amona will not fall again,” declared Boaron.

MK Shuli Mualem-Refaeli (Habayit Hayehudi), who has been at Amona since the early hours of Tuesday evening and met with residents, said efforts were ongoing to prevent the eviction.

“The Supreme Court has not yet had its say in relation to the draft plan and the state is going to evict at first light. We are making efforts to delay the eviction until a decision is made by the Court. We worked hard on the draft plan in order to keep the residents on the hill and we must not give up,” she said.

As part of a compromise agreement worked out by Education Minister Naftali Bennett (Jewish Home) and Prime Minister Binyamin Netanyahu, the 42 families of Amona were to peacefully evacuate their homes in exchange for two things: one, passage of the Regulation Law, which would protect other Jewish communities from expulsion over ownership claims made years after their construction.

In addition, the agreement provided for the relocation of 24 of the 42 families to alternative plots on the same hill where Amona currently stands. New homes and public buildings were promised as part of the deal, as well as a new community for the remaining 18 families, who would be resettled near Shiloh.

Amona residents voted to accept the agreement, and the Supreme Court granted a delay in the implementation of the evacuation orders, pushing back the demolition from Dec. 25 to no later than Feb. 8.

Since the inking of the deal, however, residents say no work has yet been done on the new neighborhood promised under the agreement. Amona residents have nowhere to go.