When Bending Down Is Reaching Up 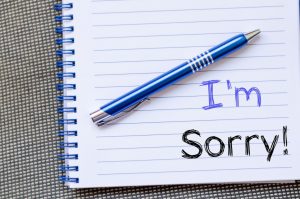 The simple words are at the core of every successful relationship, and their importance is stressed in schools and homes everywhere. Yet so many people find it extraordinarily difficult to utter the phrase “I am sorry, I was wrong” — or some variant of it.

In some circumstances we find it easier to camouflage our intentions by expressing our “regret” in a way that does not include any admission of wrongdoing.

One frequently used technique is saying something along the lines of “I am sorry that you feel this way,” and then immediately launching into a full-throated defense: “… but you should know that…”

In other situations, we find it extremely tempting to actually delude ourselves into believing that in reality we were right — despite all evidence to the contrary. Invariably, in the depths of our hearts we know that we were wrong — and that annoying thought does niggle at us — but we act quickly and decisively to quash it by wrapping ourselves in an invincible cloak of righteousness.

On the first floor of Mesivta Torah Vodaath there is an office known as the mailroom, where staff members take envelopes and packages to be mailed. Late one afternoon some 20 years ago, after this office was already closed for the day, I passed by and saw my rebbi, Harav Nesanel Quinn, zt”l, then already close to 90 years old, bending down and pushing an envelope under the door.

I approached Rav Quinn with a question. “Why didn’t the rebbi give me the envelope to push under the door?”

I would later discover that Rav Quinn went to extreme lengths not to impose on anyone and would not allow others to do menial tasks for him. But he chose to use this incident to teach an important lesson.

“The envelope was for tzedakah, and I preferred to do the mitzvah myself,” he explained. “It says in Tehillim, ‘Emes mei’eretz titzmach — truth sprouts from the ground.’ The Maggid of Mezeritch asks, ‘If truth grows from the ground, why is there so little truth in the world?’ He answers that truth does indeed grow from the ground, but in order to take it, one must bend down. No one wishes to bend… Es iz gut zich tzu beigen — It is good to bend down,” Rav Quinn concluded.

No one wishes to bend. Especially those in a position of power often make the fundamental error of assuming that an admission of wrongdoing is an act of weakness. In reality, the precise opposite is true. A willingness to acknowledge a mistake is a sign of greatness and is key to earning respect and admiration.

We refer to ourselves as ‘Yidden,’ based on the Lashon Kodesh term ‘Yehudim.’ The word ‘Jew’ is also said to have evolved from the word ‘Yehudi,’ taking the longer route through the word ‘juiu’ (Old French), and the Greek ‘ioudaios,’ which, in turn, came via Aramaic.

Why, indeed, are we called ‘Yehudah’ and not by the name of one of the Avos, or the other Shevatim?

The saintly Tanna, Rabi Yonason ben Uziel, teaches us in Parashas Vayechi that it isn’t because Yehudah was the king of the other Shevatim and the forebear of Malchus Beis Dovid. Rather, it is because, after hearing of the words of Tamar and what she was alluding to, he declared, “She is right.”

As was reported in these pages, on Friday, President Donald Trump broke with the practice of past presidents on both sides of the political divide by failing to include any mention of the genocide of Six Million Jews in a statement he released marking International Holocaust Remembrance Day.

Such an oversight — which is ready fodder for Holocaust deniers — could have easily been attributed to an unintentional error made by a new administration still trying to find its footing.

However, senior White House officials, including the White House chief of staff and a Trump spokeswoman, insisted that it wasn’t an oversight, but rather an attempt to show that the new administration is “an incredibly inclusive group” who “took into account all of those who suffered.” This is the latest example in a pattern of errors in judgment by this president (as well as his predecessors) — followed by a refusal to back down and admit to making a mistake.

Unless we take concrete steps to avoid it from happening, we are invariably influenced by the news and the actions of the political leadership. This is especially true when a political leader has earned — rightfully or otherwise — a significant degree of popularity among some members of the community.

We must remain cognizant of the fact that our only true source for moral guidance is the Torah and our only real role models are the spiritual giants who teach us by their sterling personal example.

The very fact that we are known as ‘Yidden’ should remind us that, in addition to being key to having successful interpersonal relationships, it is a fundamental part of avodas Hashem to be able to say the words, “You are right and I was wrong.”